Beginners Guide to the Superbowl

So you’ve heard a tonne about this Superbowl lark that’s going on this weekend. Really you just want to see if Maroon 5 are going to be as shit as you expect (There are alternatives to the half time show if you’d prefer those). But while you are there, you said you may aswell see what all the fuss is about with this American Football thing….where they don’t actually touch the ball with their feet (except the kickers and punters but we’ll get to that).

So what is causing half of the United States to put down their guns and KFC and tune into a near 4 hour show every year? Well the Superbowl is the final of the entire NFL season. The NFL is divided into 2 different sections, the AFC and the NFC. The champions of each meet each other in the Superbowl for the Vince Lombardi Trophy and all the glory. It gets a lot more complicated than that but for the sake of the Superbowl, it’s Champion against Champion.

The game of American Football has a lot of complicated and specific rules. The official rulebook is 120 pages long. Even the referees have to argue about them sometimes so don’t worry about the specifics, we’re just going to cover the basics here. That should be enough to get you through the big game without having the look of a constipated hamster on your face for the entire thing.

Here is a quick video that the NFL themselves put to together covering most of the basics but I’ve also written out and elaborated a little on them below. (I found the video after I wrote the article, it would have been so much handier to just put up the video but I’ve put the work in now so more detail below)

The pitch they play on is 100 yards long with an extra 10 yards at either end is marked off as the endzone. No metric system here people. And there is also a rugby style goalpost at each side. The pitch itself has little markers all along the side and middle for every yard and a full line across the pitch for every 5 yards saying how far away it is to the nearest End Zone. Where you are on the pitch means everything in American Football so it’s handy to know where you are.

American Football uses an oval ball like a Rugby ball. It has some laces on one side of the ball to help with holding and passing it.

There are 11 players from each team on the pitch at any one time. You generally have a completely different lineup of players when playing Offense or Defense. There is also a 3rd lineup calls Special Teams but we’ll come to them later. There is no limit on substitutions so players can come on and off as long as there are only 11 on the field. 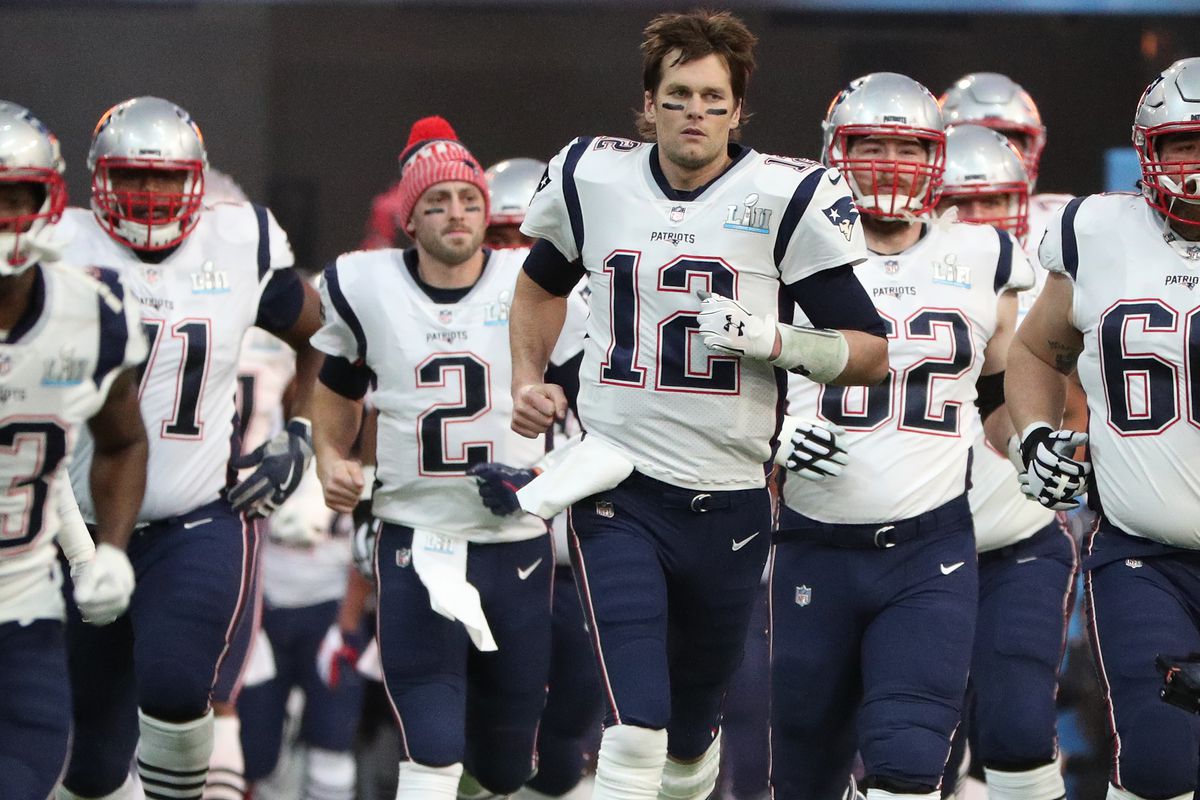 The Quarterback is the playmaker of the team. He decides the plays and is the guy who throws the ball. He’s also usually the best paid which is nice.

The Running Back is the guy who runs with the ball. The QB will hand the ball off to the Running Back who will run like hell dodging, ducking, dipping, diving and dodging. A RB can also transition and play like a Wide Receiver, see below.

The Wide Receivers are the guys who try to catch the ball thrown by the QB. They run predetermined routes so the QB knows where to throw the ball. After they catch the ball, they can then run with it if they haven’t been tackled.

The Tight End is a combo Offensive Lineman and Wide Receiver. They can go either way depending on what the play needs.

There are a bunch of different positions on Defense too but really all you need to know is that they are trying to stop and tackle whoever has the ball. They can recover the ball if someone drops it and get possession for their team. They can also intercept a pass by catching it clean while it is still in the air. This also gets possession for their team and they can try to run it back for a touchdown themselves.

Kinda self explanatory. These guys kick the ball under certain plays. Think of the number 10 in Rugby except they just do the kicking part.

The basic aim of the game is the same as most other field games. To score more points that your opponent. There are a few different ways to score and they give different points:

At any point during normal play, the team can choose to try to kick the ball between the posts at the end of the end zone from wherever they are on the pitch at the time. This is usually only done when they are at around the 30 yard line or closer as otherwise the kick is a bit too far to have a chance.

After you score a Touchdown, you then get to have one extra play to score bonus points. The scoring team can pick whichever they like. There are 2 options here:

This is a field goal attempt from the 15 yard line. If they get it, they get a bonus point. This is what most teams tend to go for unless it’s at the end of a game and they need the 2 points.

The ball is placed at the 2 yard line and the offense have 1 play to try to get the ball in the endzone. If they get it, they get 2 points. If they don’t, they get nada.

This is a rare one. This occurs if the attacking team get stopped while inside their own end zone. This results in the defending team getting 2 points.

When playing the game, each team takes it in turn to try to score with their offensive lineup taking on the oppositions defensive lineup.

The game (they call them games, not matches over there) starts with a coin toss to determine who starts with the ball. The first play of the game is a kickoff which means that one team will kick the ball to the other team and they can catch it and start from there or catch it and try to run it back a bit to start from a better position. If the kickoff goes out over the endzone, the receiving team will start at their own 25 yard line. This gets us into the bread and butter of the game.

When watching a game, you will hear the commentators talk about Downs a lot. Downs basically means attempts. A play will start at the line of scrimmage which is where the ball finished up on the last play. They then have 4 chances or downs to get the ball 10 yards down the field. They can do this by either running or passing the ball. If they manage to make it the 10 yards, then they get a new set of downs or attempts to get 10 yards from where they end up. This continues down the field until they score or fail to make it 10 yards.

Taking the example earlier of a team starting at their own 25 yard line after the kickoff. They will have 4 downs(attempts) to make it to the 35 yard line.

Let’s say that they tried to run the ball on this first attempt but only managed to get 4 yards down the field. That means we are now on to 2nd and 6. So it’s their 2nd attempt now. They will start from where they finished on the last play and have 6 yards left to go to get a new set of downs (attempts).

On the 2nd play, we’ll say they pass the ball  and get tackled 13 yards down the field. This means that they get past the 35 yard line that they were aiming for and get a new set of downs. As they made it the 13 yards, they will now be starting where they finished and are on their own 42 yard line. They need to get to their opponent’s 48 yard line (the 50 yard line is the halfway point).

If a team gets to a 4th down, then they have to make some decisions to make. Especially if there isn’t much time left and it’s a close game.

If they are still a long way away from making it to the 10 yards or to the endzone, they will usually Punt the ball. This means the kicker will kick it back to the other team who will then start from wherever they catch it further down the field.

If they are close enough to the end zone, they may choose to try for a Field Goal and get 3 points.

On some occasions and often late in a game, they will go for it on 4th down. So it’s all or nothing to try to get that new set of downs and keep going. If they fail to make it, that means that the opposition will start with the ball from the point that they just had it. This means that it is usually way further closer to scoring than they would have been with a Punt.

The game is played in 4 quarters of 15 minutes each. You keep the ball and your position on the field when going from the 1st to the 2nd quarter and from the 3rd to the 4th quarter. Play direction is just reversed at those points. At halftime however, all play is reset and the team that didn’t start the game with the ball will start the 2nd half with the ball.

Even though the playtime is 1 hour, the clock is always stopping and starting so that 1 hour playing time can be 3 or 4 hours realtime on occasions.

If you try a running play and get tackled down, the clock keeps running.

If you complete a pass and get tackled down, the clock keeps running.

However if you try for a pass and miss (called an incomplete pass), then the clock stops.

Teams have 40 seconds from the finish of the previous play to start their new play or they will get a penalty. This 40 seconds (called the Play Clock) counts whether the main clock is running or not.

Each team also has 3 timeouts for each half of the game which they can use to stop the clock. They can take up to 2 minutes for the timeout. One more time the clock is stopped is called the 2 minute warning. This an automatic timeout that happens when there is 2 minutes left to go at the end of each half.

I think that sums up most of the game of Football. There are a tonne more rules but that covers the gist of it. American Football is a very strategic sport so it’s all about picking the right plays at the right time to make sure you can get past the defense and get down the field. Once you understand how the down system works, the rest follows along pretty handily. It really is a great game to watch.

I would really recommend watching NFL Redzone during the regular season as it’s pretty much non stop action. Think Sky Sports News on Sundays but with actual footage of the matches. This Sunday’s match features the New England Patriots going up against the Los Angeles Rams.

About the Author: Nicky Bowe - Junior Executive Vice President of that feeling you get when you are walking alone at night and you're sure there's someone there. Nicky loves Wrestling, Video Games, Batman, General Nerdy Stuff, Pina Coladas and getting caught in the rain. He likes DDP Yoga and having half a brain. Quite fond of making love at midnight, doesn't need to be in the dune of a cape. If he's the author you are looking for, write to him and escape.
Related Items1NFLSuperbowl
← Previous Story When will Car Insurance Providers Stop Riding Men?