I didn’t get to watch Smackdown until late this week so I assume most people have already seen it or heard about what happened at this stage. So this is going to be a very quickfire article summarising what happened on the go home episode of Smackdown before Chazzwozzers otherwise known as WWE Super Showdown.

We open with Paige in the ring. She says that Samoa was bad. She called him Samoa. I guess she doesn’t realise that’s a country and not his name.She let’s us all know that Joe didn’t go into the Styles’s house. The authorities were called and Joe was charged with trespassing for some reason. I didn’t know ringing a doorbell was trespassing. I didn’t see any gates or anything. 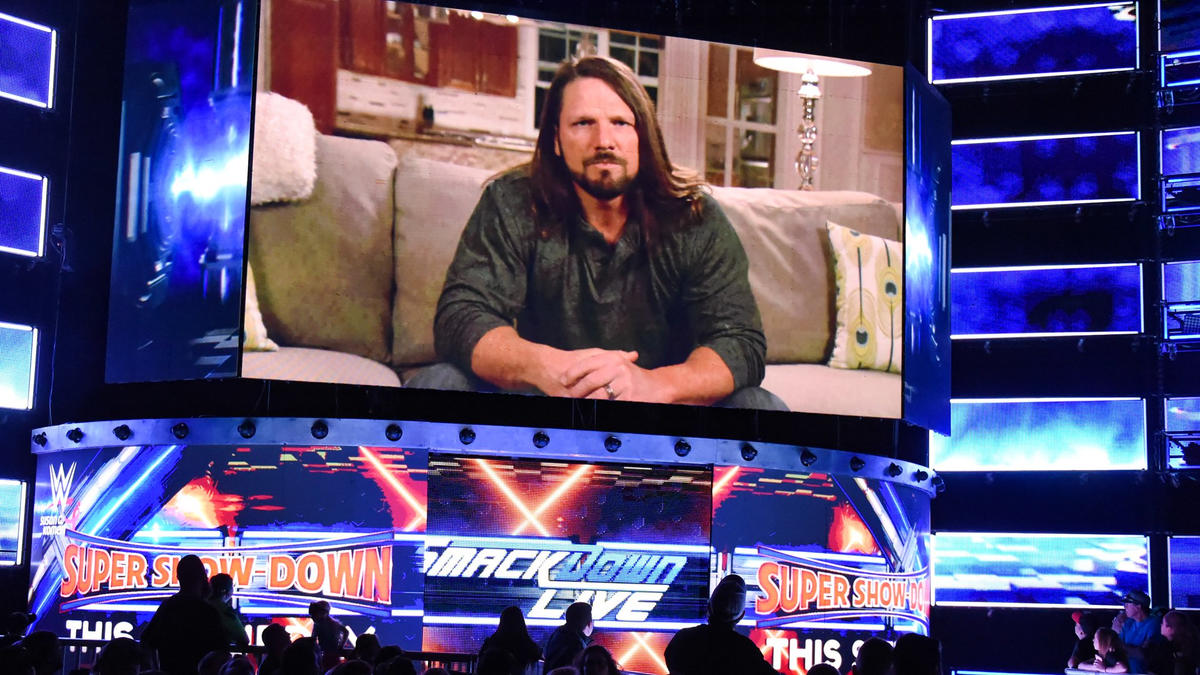 Paige said WWE Management decided that Joe should be fired but she called AJ first, who said he had dropped the charges, and begged her not to fire Joe. So the match is still on for Saturday.

AJ made a clip to air as he’s not at Smackdown, because he’s at home with his family. He’s not leaving until Joe is on a plane to Australia. He says that Joe is not coming back from Down Under because that’s where he’ll be. He’ll bury him alive. Then they announce it’s a No DQ, No Countout match. Not a Buried Alive match….. What is this world?

ONE NIGHT IN MILWAUKEE

Rusev was in the ring asking Aiden to come out and show the evidence he claimed he had last week.  Aiden gives some backstory facts about Milwaukee. He failed to mention that it is a sister cities of 2BitSports headquarters of Galway, Ireland. Shame on you Aiden, shame. This is basically an advertisement for Milwaukee. Are they giving WWE loads of money too? Their basketball team is called the Bucks. Does Vince think they have loads of bucks? 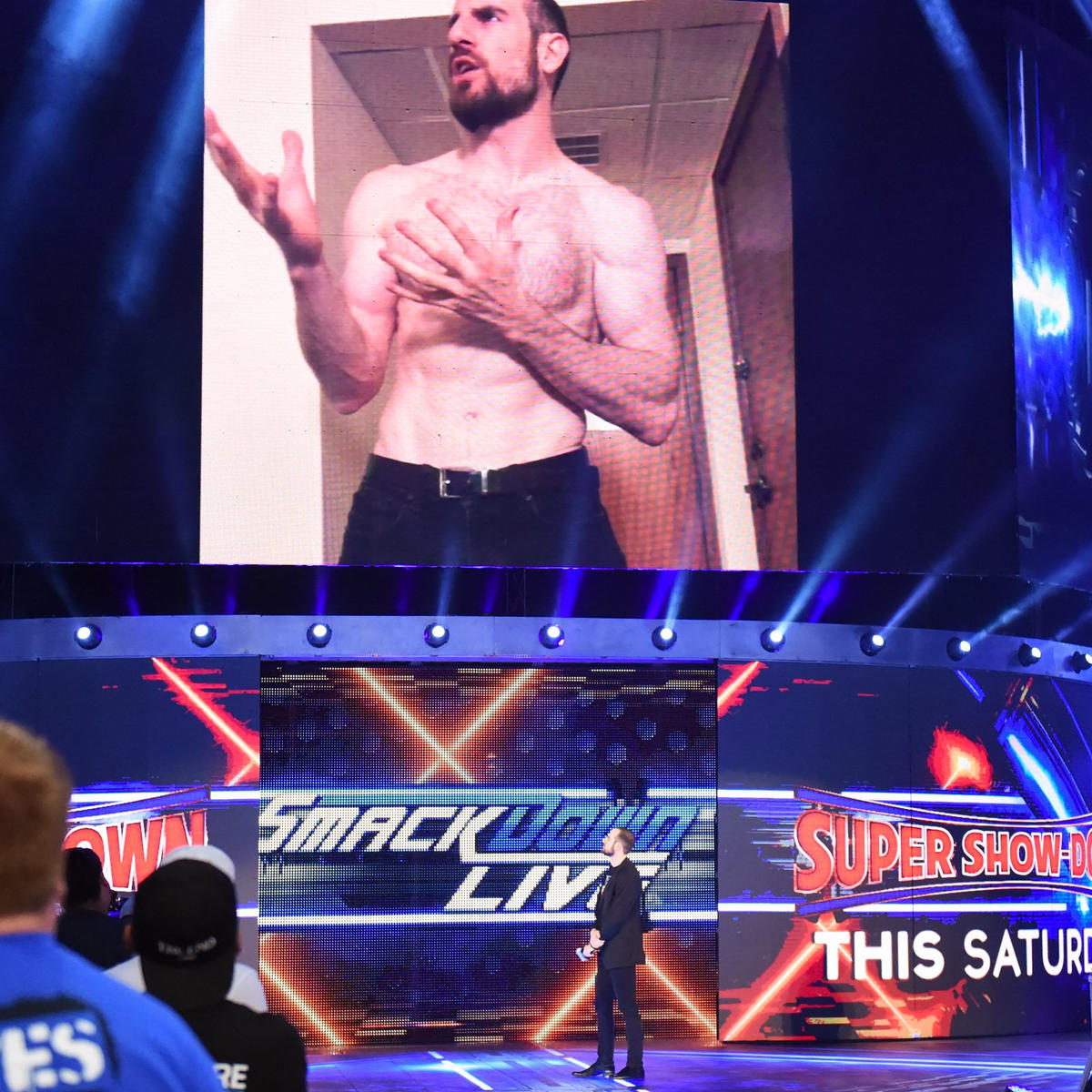 We get to the video and it starts with Aiden practising Milwaukee insults in his hotel room while topless. Lana comes in and says “I Want You” to Aiden. The video cuts off there and Aiden can’t show us the rest due to legal obligations due to an offer from TMZ. Rusev chases after Aiden. Lana tries to explain. Rusev said that they are not doing this here.

Our Women’s Champion Becky Lynch has Super Showdown Surprise for us all.  She says she’s been the best thing about Smackdown since she won the title. No argument from me. She shows a video package of her bettering Charlotte multiple times. We get lots of “Becky” chants. She asks “Where’s my magazine cover?” “Where’s my new figure holding the belt?” All valid questions from the Lasskicker. 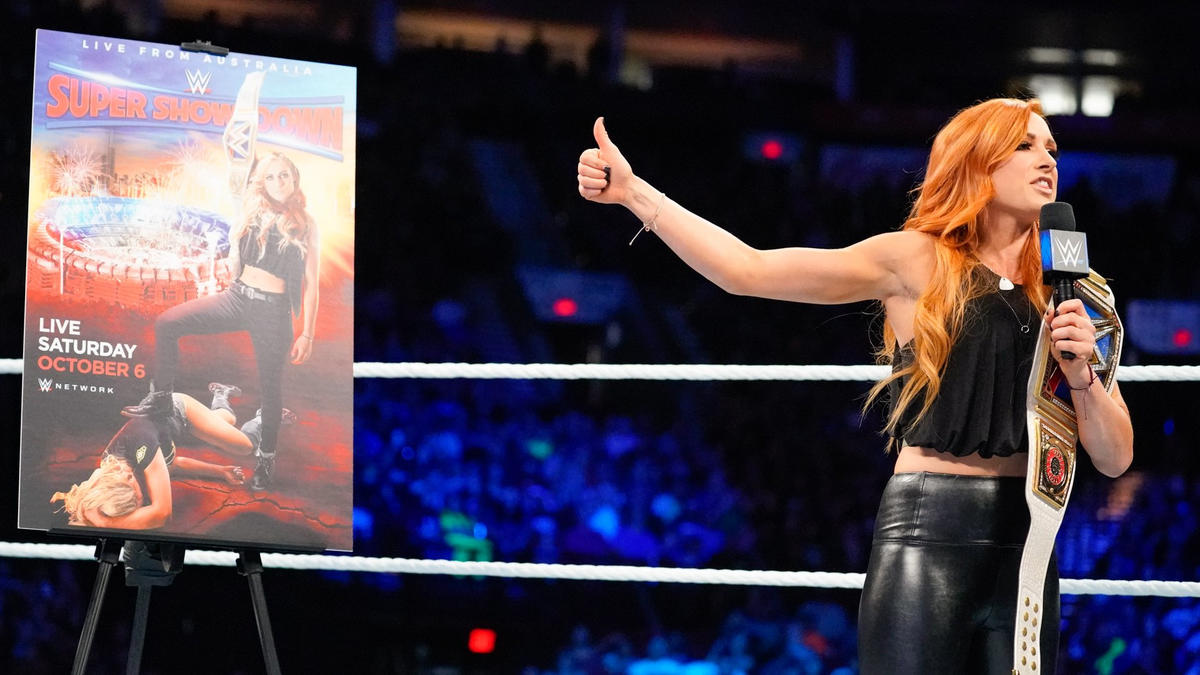 Becky says that she’s gonna prove that it’s the champ’s face that deserves to be on all the covers/posters/etc. She has a new poster for Super Showdown which just has Becky standing over Charlotte with the title held aloft. It’s much better honestly. Charlotte runs down and attacks Becky and the crowd boos. Let’s not forget who is supposed to be the heel here.

Charlotte locks in Figure 4 while hanging out of the ring, hits a Big Boot on Becky and stands tall to close out the show. 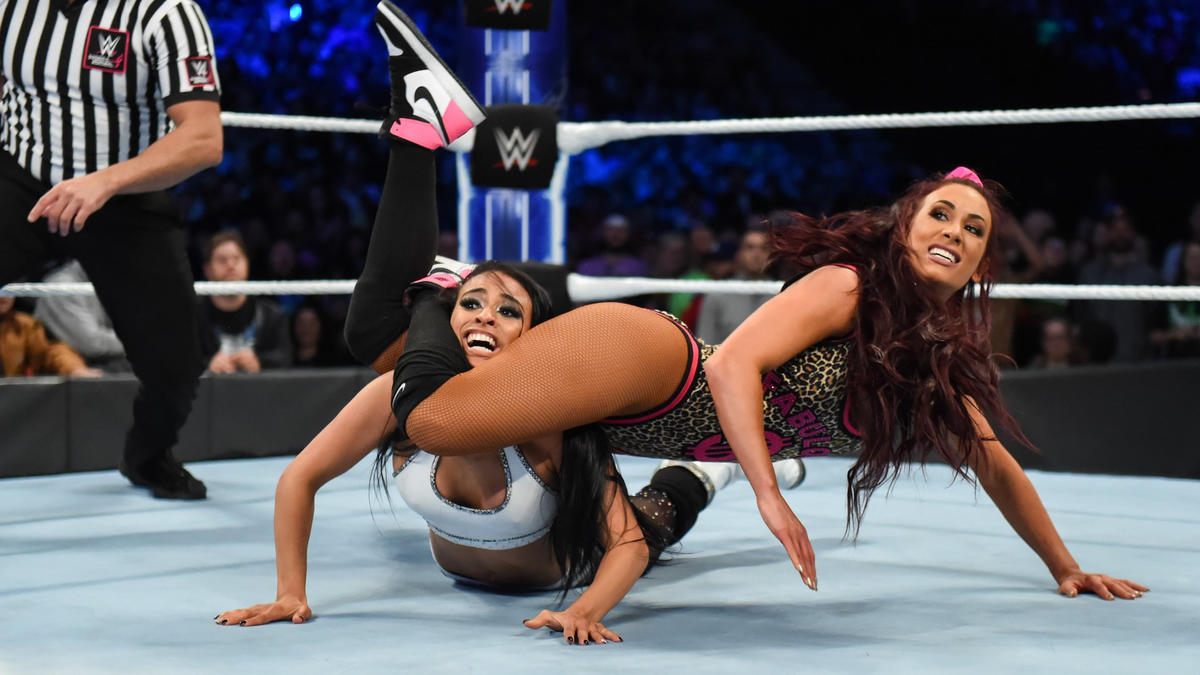 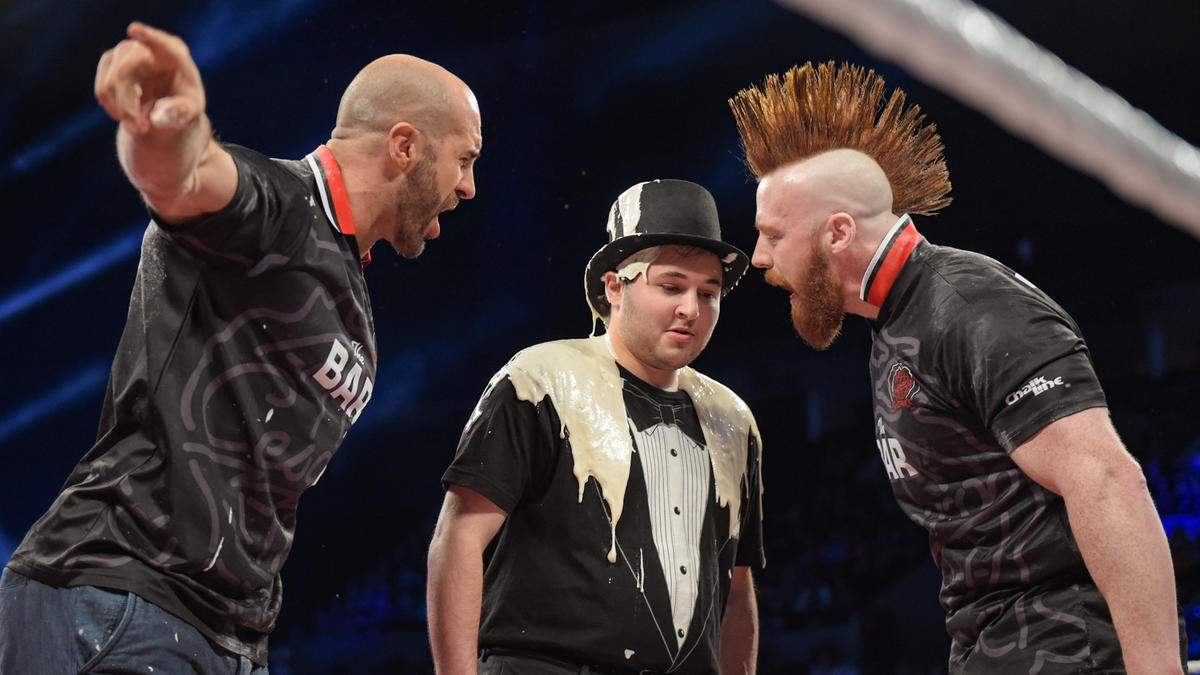 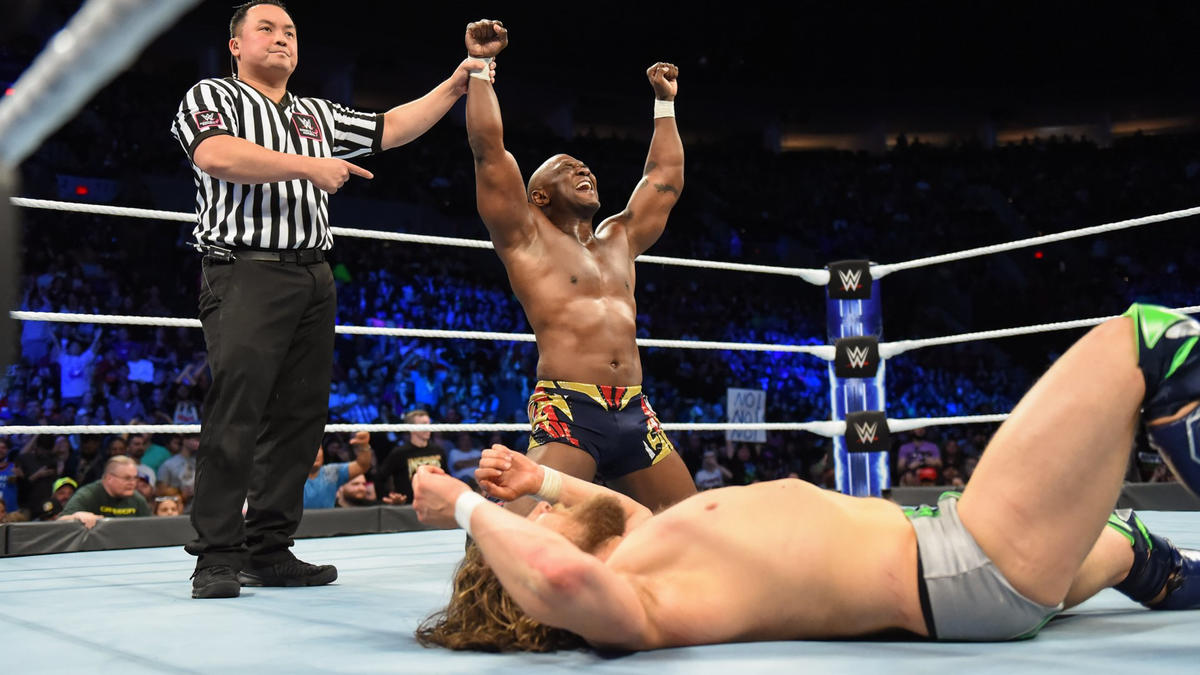 It was grand. Better than Raw. Some stuff actually happened on this. Oddly looking forward to Chazzwazzers even though it’s just going to be a glorified house show. The Cruiserweight Title match is the one I’m looking forward to most though so take that as you will.

About the Author: Nicky Bowe - Junior Executive Vice President of that feeling you get when you are walking alone at night and you're sure there's someone there. Nicky loves Wrestling, Video Games, Batman, General Nerdy Stuff, Pina Coladas and getting caught in the rain. He likes DDP Yoga and having half a brain. Quite fond of making love at midnight, doesn't need to be in the dune of a cape. If he's the author you are looking for, write to him and escape.
Related Items1aiden englishAJ Stylesandrade cien almasasukabecky lynchcarmellacharlottedaniel bryanIIconicslananaomiNew Dayr truthrandy ortonrecapreviewrusevshelton benjaminSmackdownSmackdown LiveThe MizTye Dillingerwrestlingwwezelina vega
← Previous Story Going in Raw – WWE Raw – 1st October 2018
Next Story → Ambrose going lunatic – Leaves Shield? It’s the RAW Recap!