It’s the go home Smackdown before Hell In A Cell this weekend. The Smackdown side of things is definitely better up than the Raw side of things. Can the blue brand finish strong? Well not quite. There was no real standout story from Smackdown this week. Typical go home show affair. People involved in matches at Hell in a Cell attack each other. There’s your show. Happened in pretty much every match. So we’ll start with the one match that it didn’t happen in.

In the match to determine the No. 1 contenders for the Smackdoen Tag Team Titles, The Bar took on a newly revitalised Rusev Day. The New Day once again had their own commentary table at ringside. Before the match, Kofi threw to backstage reporter Kramer Kingsman in the back who talks in front of The Bar. Kramer bears a striking resemblance to someone but I just can’t place who. Big E was also making pancakes from scratch in a big mixing bowl.

On this entrance, Aiden English sang and didn’t insult the crowd or local area or sports team so maybe they are finally embracing them being face. Too little, too late? They do the switching between New Day commentary and regular commentary again. I will say the same thing I have said everything time they have done this. Keep the audio on the New Day. 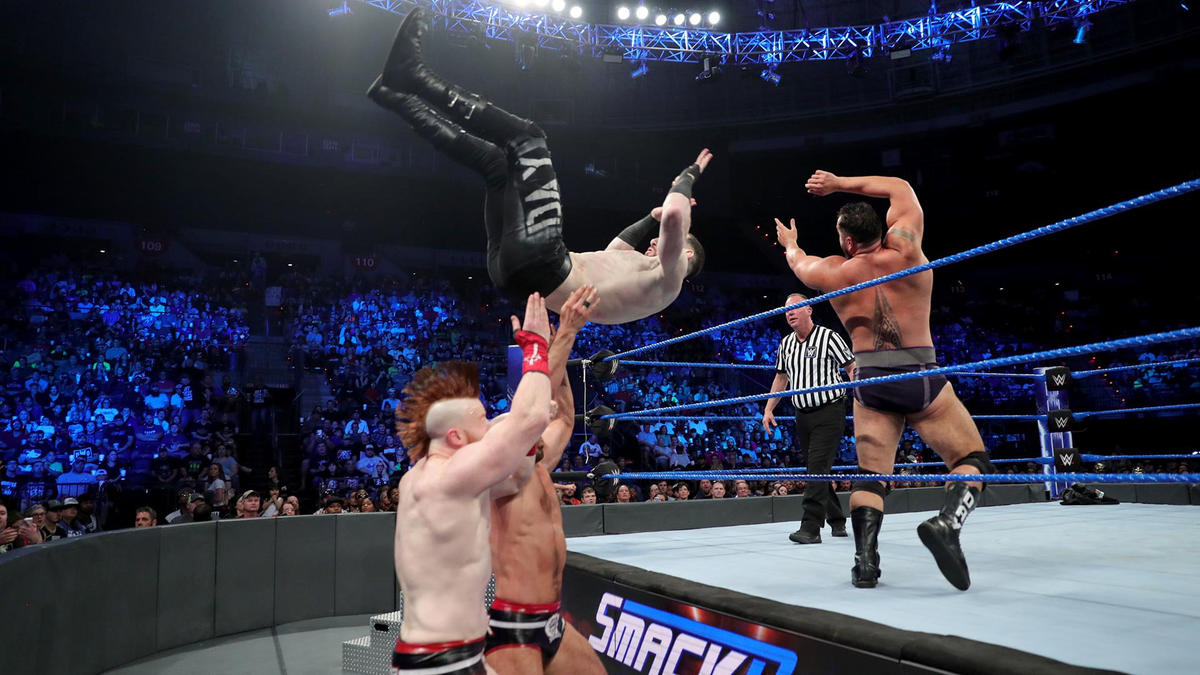 This was a really good match, the Smackdown tag division is on fire right now. Every match is great. The finish came when English jumped in and took a Brogue Kick that was heading for Rusev allowing Rusev to hit a Machka Kick on Sheamus for the win. So it’s going to be Rusev Day vs New Day at Hell in a Cell. Why do I see this getting demoted to the Preshow?

Now onto the attacks against HIAC opponents. The first one came in the form of an actual match…kinda. Brie Bella went against Maryse in the main event. Before the match, Kayla Braxton, who looks to have been called up to Smackdown as backstage interviewer after Renee’s permanent appointment as Raw commentator, had Miz and Maryse with her. They say that the match will be Maryse’s first singles match in 7 years. Kayla asked Maryse if she’s ready. She said that it took Daniel 3 years to get back to the ring, but only took her 5 months after giving birth to get back in the ring. Miz called the Danielson marriage a marriage of convenience. But it’s not convenient for Brie anymore as she has to fight Daniel’s battles for him now. Dem’s Fighting Words. 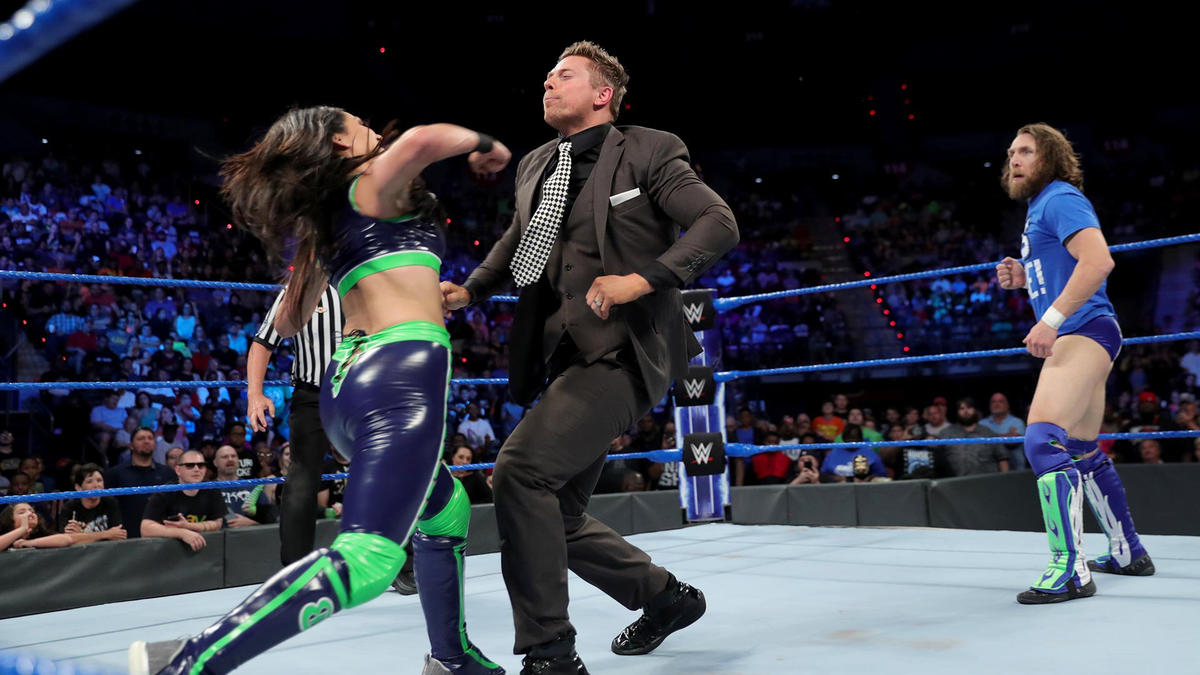 Miz and Maryse  go to walk off, but Brie follows them up the ramp and drags Maryse back to the ring. Brie locks in the Yes lock but Miz pulls Brie out of the ring causing the DQ. Bryan gives chase to Miz, but ends up getting thrown out of the ring and lands on Brie. Miz and Maryse attack the Danielsons some more but Brie gets the upper hand before Miz tries to pull her off. Daniel then attacks Miz and Brie punches Miz in the face before they clear the ring and celebrate to end the show.

This week’s Smackdown opened with Jeff Hardy vs Shinsuke Nakamura. Before the match, Jeff cut a promo where he said that he’s overcome demons but he will be facing the most venomous demon on Sunday. But Jeff’s a daredevil, and has no fear. He then seems to have forgotten his line before saying that he prepared his whole life for this.  He will make Randy Orton fade away and classify himself as obsolete.  Only a small section of the crowd respond to this. That made me sad. He said that he will cleanse a demon of recent past later tonight (he meant right now) and then he’s going straight to hell… enjoy the show everyone. (He said that. That wasn’t something I added.) 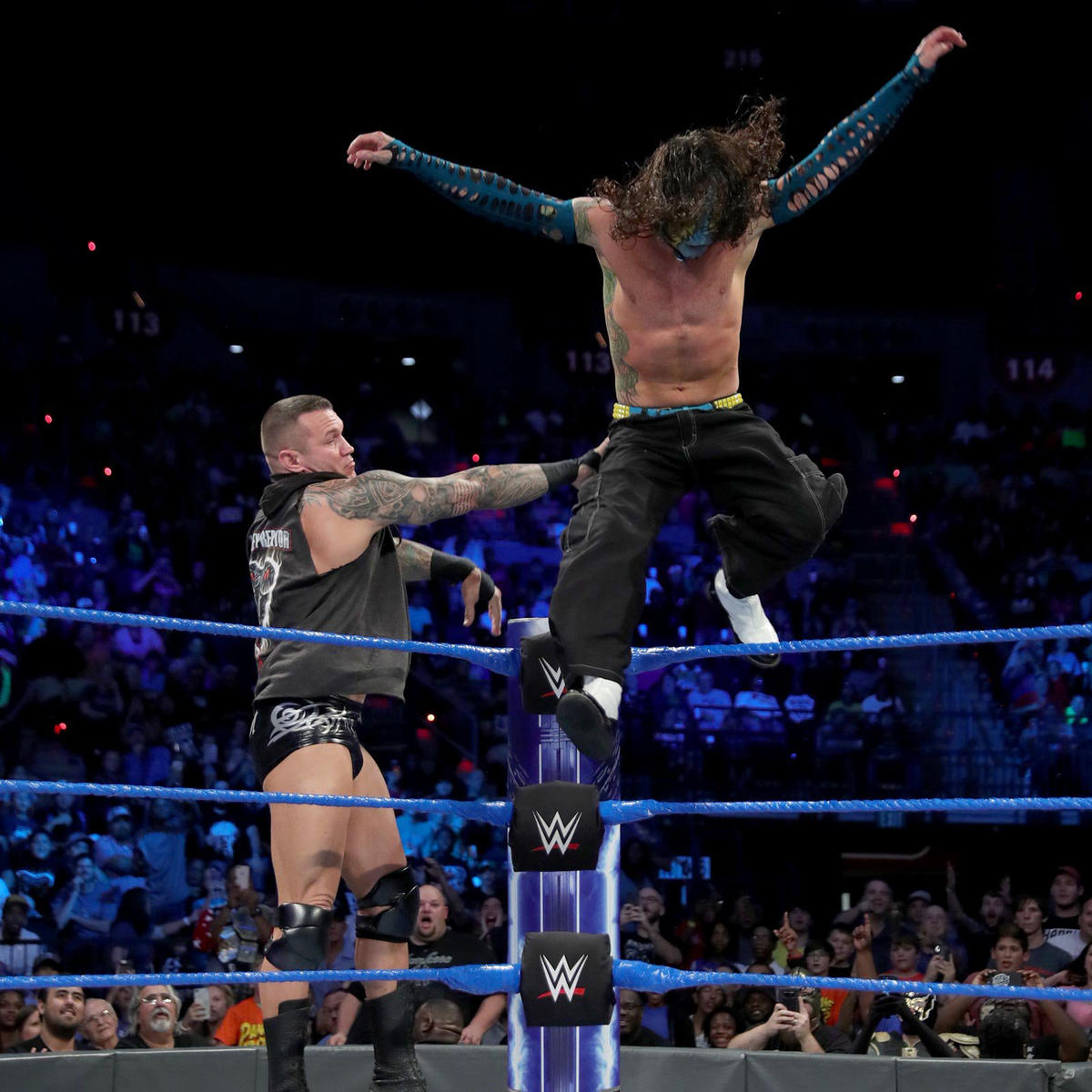 We had a recap of the Becky/Charlotte promo last week. Then Kayla was with Charlotte who said that she asked for competition tonight as she proves it in the ring, not through talking. Becky will learn that it’s easier to talk the talk than walk the walk. In the Charlotte vs Sonya Deville match that followed, it seems Sonya is robing SAnitY’s gimmick of giving people epileptic fits with her entrance. It was a very sloppy match, with most of the sloppiness coming from Charlotte’s side. Mandy Rose who was at ringside tried to get involved at one point but to no avail as Charlotte got the win with a Figure 8. 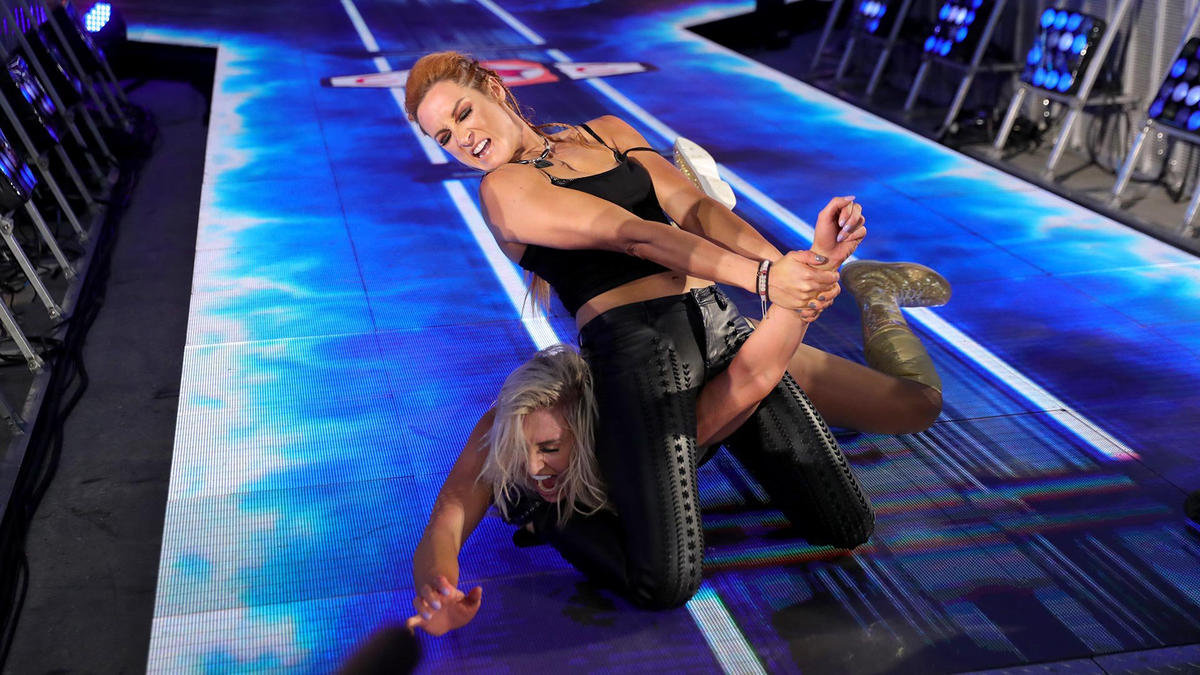 After the match, Charlotte was poses with some fans for a picture when someone attacked her from behind in the crowd. It was some random brunette one with glasses. But wait a minute, she took off her wig and you wouldn’t believe it, it was Becky Lynch. Becky jumped the barrier and locked in the Dis-Arm-Her onto Charlotte on the entrance ramp. During this, there were a lot of Becky chants, but some Charlotte ones thrown in there too. Don’t let creative win people, Becky is bae. Becky is face. Becky better win on Sunday. Afterwards, Kayla (she was everywhere on this show) asked Becky about the attack. Becky says he will break Charlotte’s arm after she takes back her title at HIAC.

For the WWE Title Match buildup, we had a video package from each of the challengers. AJ Styles was in the empty arena earlier today before the show sitting on the ring steps talking into the camers. He said that Joe knows that AJ loses his temper if Joe talks about his family. Joe thinks that if he messes with his heart, that will mess with his head, and give Joe the advantage.  But AJ knows a lot about Joe after 20 years of friendship. Joe has a family too, but AJ wouldn’t mess with that. And he said that is his strength. Joe’s strength is running his mouth, intimidation, and being a piece of …. garbage.

But Joe’s strength will be his weakness. No-one has the upper hand once the bell rings. The talking stops at HIAC. Joe got a dose of what will happen to him at Summerslam, and more last week. AJ will show Joe how phenomenal he really is at HIAC. This is the house that AJ Styles built, it’s not for rent and it’s not for sale.

Joe’s retort was a bedtime story for the Styles family. It was awesome. He had a real fully illustrated book, that had rhyming verses, Dr. Seuss style. It was great. Watch it below. The closing picture in the book showed Joe with AJ’s family and the WWE Title. Shots Fired. 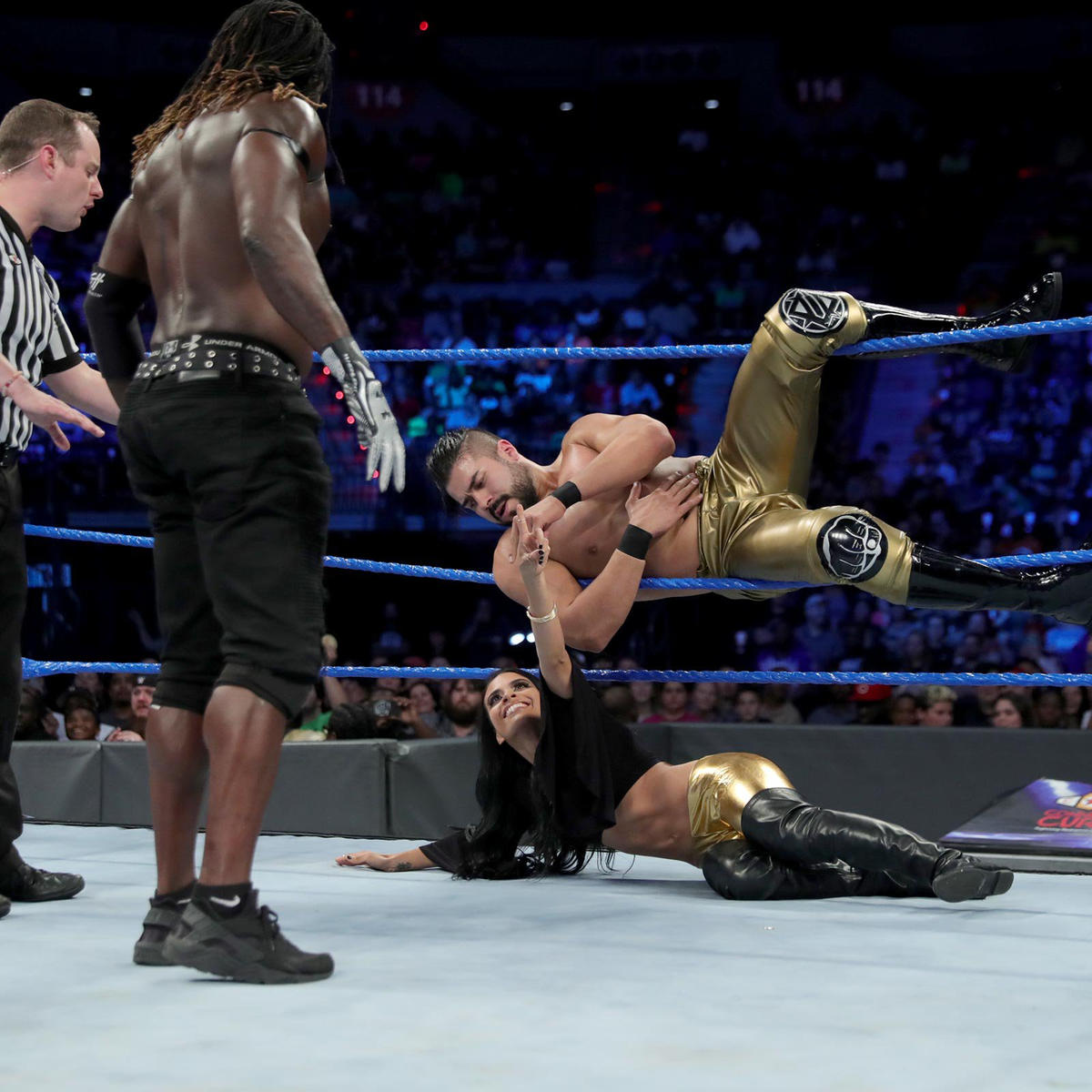 As the article title suggested, this was a pretty standard go home show. It had 2 decent matches and a couple of great promos but no real storyline progression, just a carryover until the PPV on Sunday. Saying that, I’m really looking forward to Smackdown’s contribution to Hell In A Cell. Way moreso than Raw’s contribution. The WWE Title match buildup has been perfect. The Tag Title match should be great. Jeff Hardy is going to go balls out for likely his only ever Hell in a Cell match, Becky better win, so hyped for that one and the Mixed Tag has Miz and Bryan in it so should be great. Bring on Hell In A Cell.

About the Author: Nicky Bowe - Junior Executive Vice President of that feeling you get when you are walking alone at night and you're sure there's someone there. Nicky loves Wrestling, Video Games, Batman, General Nerdy Stuff, Pina Coladas and getting caught in the rain. He likes DDP Yoga and having half a brain. Quite fond of making love at midnight, doesn't need to be in the dune of a cape. If he's the author you are looking for, write to him and escape.
Related Itemsaiden englishAJ Stylesandrade cien almasbecky lynchBrie BellacarmellaCesarocharlottedaniel bryanjeff hardymaryseNew Dayr truthrandy ortonrusevSheamusShinsuke NakamuraSmackdownSmackdown Livesonya devillethe barThe Mizwrestlingwwe
← Previous Story Going in Raw – WWE Raw – 10th September 2018
Next Story → Going in Raw – WWE Raw – 17th September 2018