The big question from last week continues into this week. What’s the story with Becky Lynch? Is she a heel? Is she a badass face? Have they done a 180 due to the crowd reaction? Charlotte defends the Smackdown women’s title against Carmella so lets’ find out.

They showed a video package of Becky’s promo from last week. And it completely skips over all the parts where she blamed the fans. So that’s looking good for them to have switched her to a badass face ala Stone Cold. The promo just showed the giving out about Charlotte and her being a sneaky bitch.

A couple of backstage interviews went down before the Women’s Title match which main evented this week’s Smackdown. Renee asked Carmella about the buzz going off her and onto Charlotte and Becky. Carmella said that the buzz follows the title. Charlotte never pinned Carmella, she pinned Becky, and in case you didn’t know, Carmella beat Charlotte twice. And she said she will do it again tonight. Another interview saw Renee ask Charlotte about all that is going on. Charlotte said that Becky wants to blame Charlotte because Becky can’t win the big one. And Charlotte will not roll over for anyone. 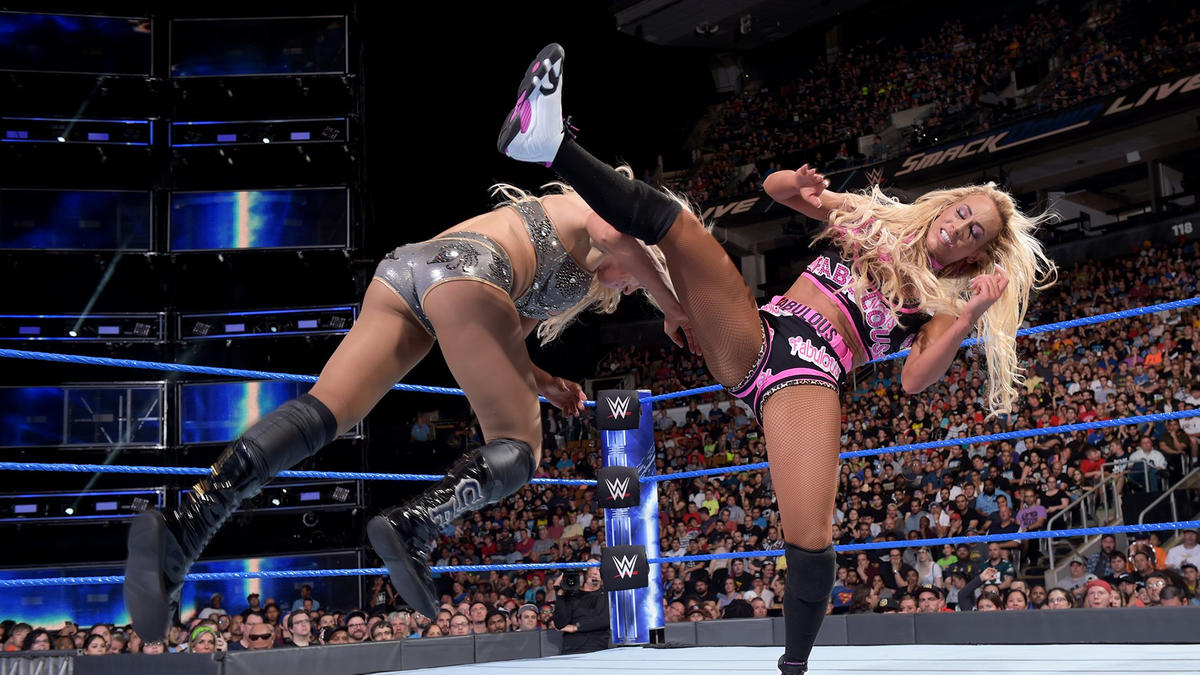 Into the match and there are “Becky, Becky, Becky” and “We Want Becky” chants throughout. So that confirms that it wasn’t just the Brooklyn Crowd. Toronto loves Becky too despite the booking. This was a pretty good match with a couple of sloppy bits. Overall, it was probably Carmella’s best match yet. Charlotte picked up the wins with a Spear, Natural Selection and then a Figure 8. After the match, Becky attacked Charlotte from behind and the crowd went wild. “Lets Go Becky” chants all over the place. Becky got on the mic and said “When I get my way, come Hell in a Cell, I’m taking my title back….you bitch!!” She held up the Women’s title to a load more “Becky, Becky, Becky” chants.

So it’s still a bit up in the air but it looks like they are going to lean into the badass babyface version of the character which is awesome. If they still end up going heel with her, then it is just poor booking so let’s hope that Road Dogg’s “Duly Noted” tweet was accurate.

SMACKDOWN HAS HOW MANY TAG TEAMS?

This week saw the start of a new mini tournament to pick challengers for the New Day’s Tag Team Titles. We are getting 2 triple threat matches with the winners facing each other to determine a new champ. Including The New Day and the Bludgeon Brothers, that means there are 8 tag teams on Smackdown, 8!!!. What is this madness? 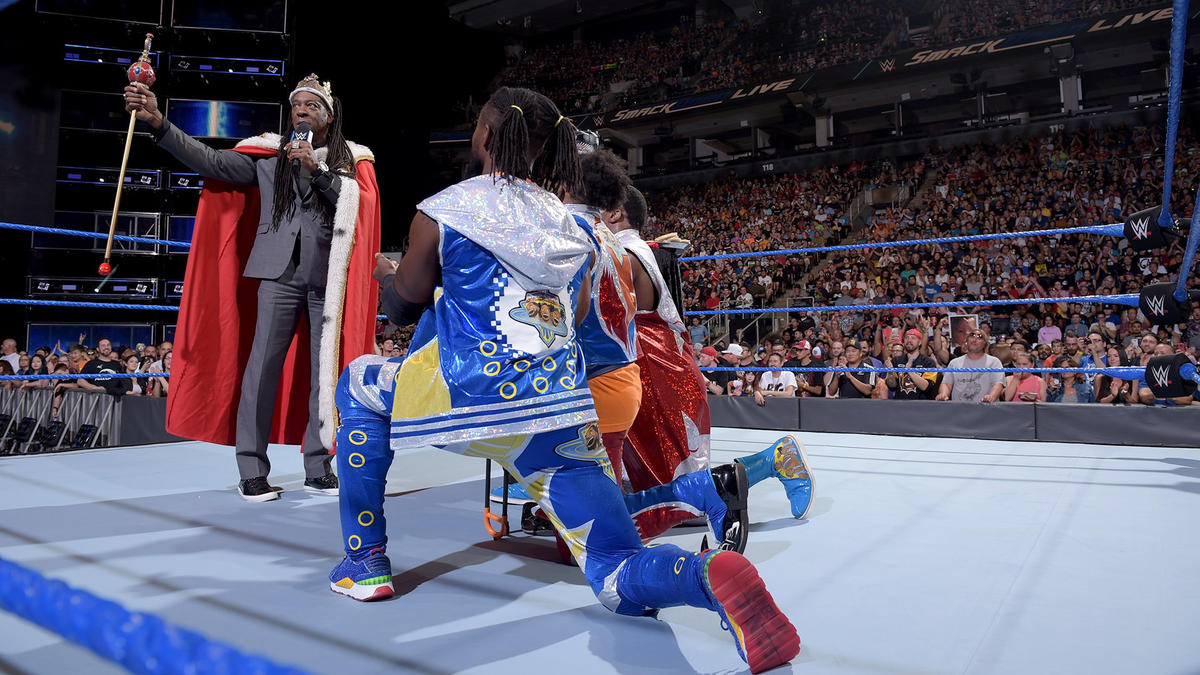 The New Day came out to celebrate their 5th title win last week. 5 time champs sounds weird on Big E’s intro. Big E was about to do the 5 time, 5 time, 5 time, 5 time, 5 time champ thing when Booker T comes out in King Booker garb. The New Day kneel before the King. Booker dubs them Lord Xavier the wise, Sir Kofi the Brave and you there….Big E. Booker welcomes them to the 5 timers championship club of all time. Yep, that’s what he said. Then they all do spinaroonies, well Big E tried anyway, he basically got spun around in a circle by the others. God loves a trier. Good stuff.

The actual qualifying match this week was a triple threat between The Bar, Gallows & Anderson, and The Colons. Remember them? Apparently they are still a thing. The orange New Day announce table complete with trays of pancakes is back for this and they do the same fade in and out of commentary thing they did last time they were there. Just give us the New Day audio dammit. After the New Day threw pancakes behind them into the crowd, The Bar picked up the win in the match. Epico and Primo hit a double backbreaker on Gallows and then Cesaro tagged in, cleared house and got the pin on a still downed Gallows.

The Bar will face off against the winners of next week’s Triple Threat match which will be Rusev Day vs Usos vs SAnitY.

HELL IN A CELL… MATCH 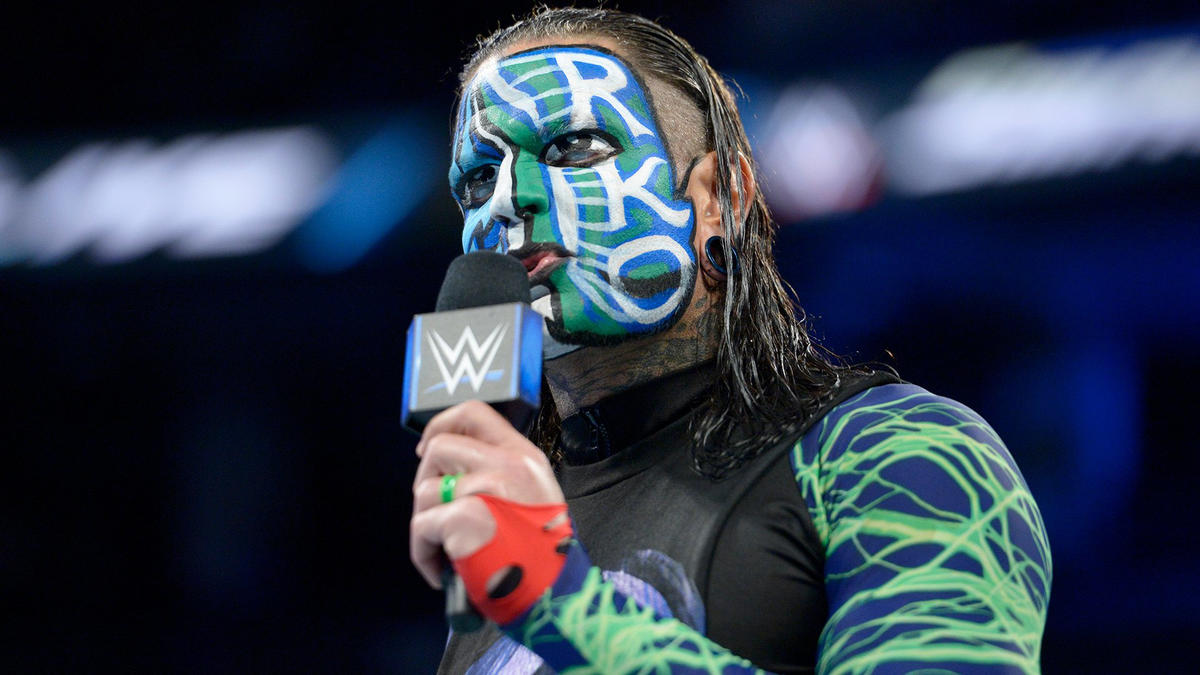 Jeff gets confused about who he is sometimes

The Smackdown Hell In A Cell match has been set and it’s going to be Jeff Hardy vs Randy Orton. Jeff has said on podcasts that one of the things he wanted to do on returning to WWE was a HIAC match. So it looks like he got his wish. This was set up with a promo off between the 2 with Jeff calling out Randy but Randy saying, nah boi, not on ur terms mate. Orr somethign like that. Leading to the HIAC challenge from Jeff.

WHO WANTS A BBQ? 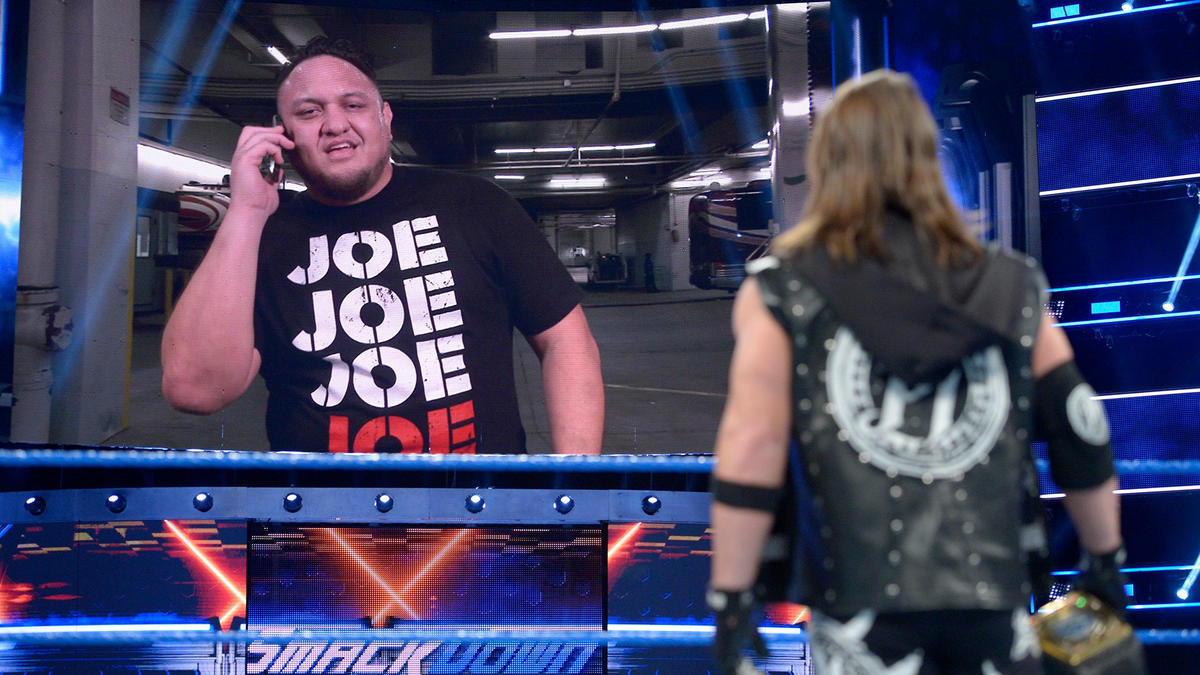 Call Joe the BBQ King, for all your BBQing needs

AJ Styles and Samoa Joe’s feud continued this week too. AJ called Joe out saying that this was not a threat, but a demand from his champion so he can knock his teeth down his throat. Joe appeared on screen and said he wasn’t gonna come down. He called Wendy Styles on the phone and sarcastically asked if they are still on for the back to school BBQ next week, saying that maybe he’ll stop by next Tuesday. So it looks like we’ll be getting a segment from AJ’s house next week. 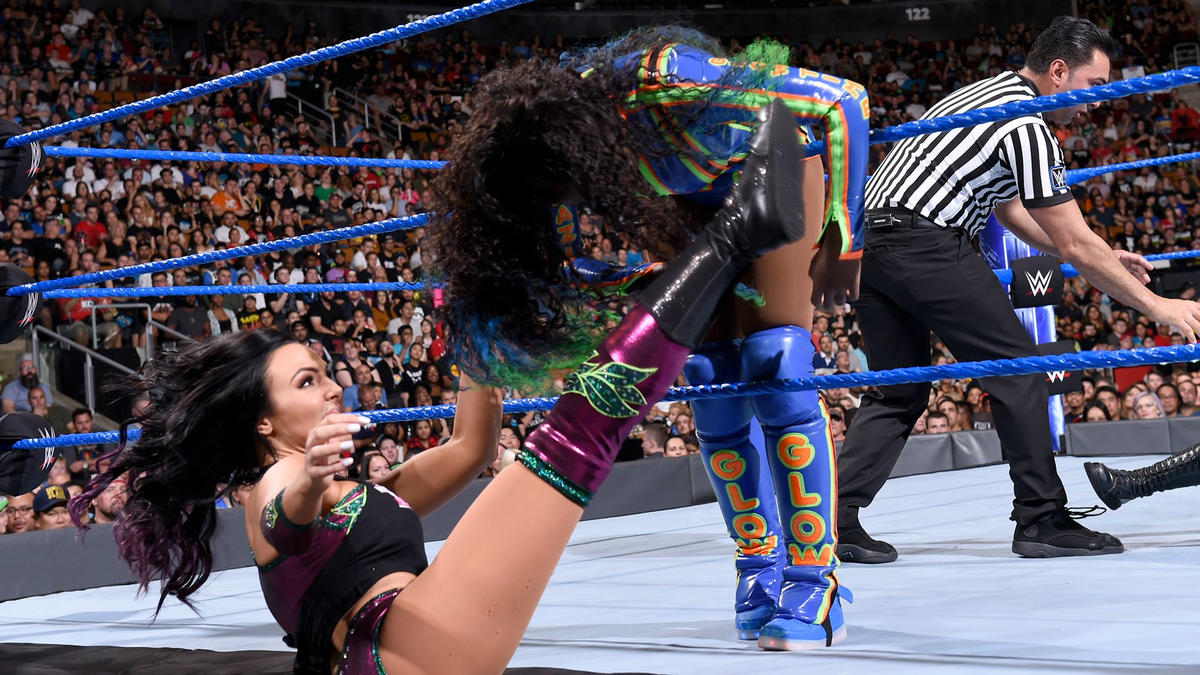 She was able to kick higher in NXT

After Naomi’s loss to Peyton Royce last week, she took on Billie Kay this week. Billie thinks she’s clairvoyant (it’s a big word, and Toronto won’t understand it) because she saw Peyton’s win coming last week, she sees the Toronto Raptors having a dismal season, and she sees Naomi having nightmares about losing again tonight. Billie’s hand gets stuck in Naomi’s hair and green hairspray goes flying everywhere when she eventually gets it loose. Shenanigans abound for the finish as Peyton kicks Naomi from the outside while the ref is distracted and Billie gets the win.

In the ongoing Miz and Daniel Bryan saga, an additional curveball was thrown in this week in the form of Andrade ‘Cien’ Almas. Daniel and Brie came out to the ring to address stuff. Brie is on both brands apparenty, must have that sweet John Cena free agent contract. Daniel says that Miz was just acting last week. Because that’s what he does. But Miz is a very poor actor. Brie says it felt good to punch Miz in the face. Daniel says it was also really hot. Keep it in the bedroom guys. They say that at HIAC, Miz won’t be able to hide behind Maryse and vice versa. 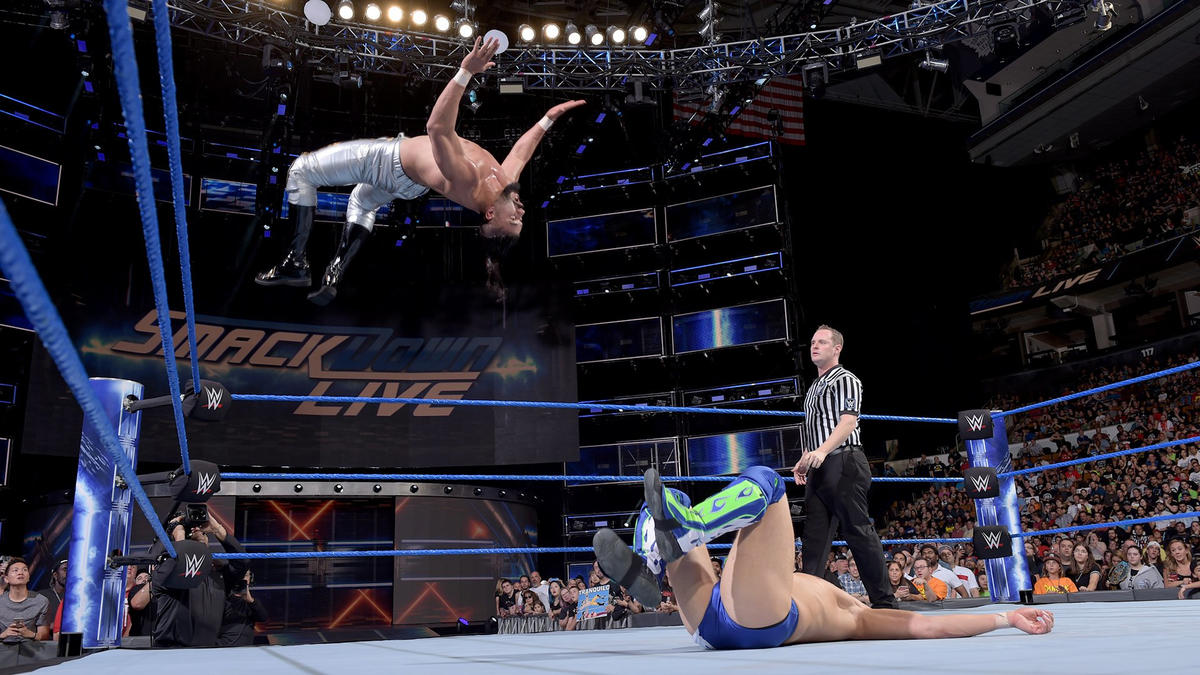 This drew Andrade Cien Almas and Zelina Vega down for some reason. Zelina with the sick burn of “What an honor to be standing next to 2 legends, Brie Bella and Andrade ‘Cien’ Almas.” She issues a challenge for a match between Almas and Bryan. Paige eventually makes the match after running from the back (realism, I like it). Miz and Maryse are watching the match backstage but Maryse whispers something to Miz and they walk off. Miz comes out on the ramp and distracts Bryan, but ends up getting a tope for his troubles. Daniel gets the Yes Lock, Almas taps but Vega is distracting the ref. Brie stops her and then Maryse attacks Brie while Miz attacks Daniel. They then make Brie watch Daniel get attacked and then make Daniel watch Brie get attacked. All round family fun.

R Truth was still looking for Carmella this week on Smackdown. He still believes he needs to pin her to get a US Title match. I’m loving this story. I really hope he ends up doing it at some stage. He lets us know that “When the time is right, the Truth shall set her free.”

Another good week for Smackdown. A nice mix of comedy and action this week with a couple of good matches thrown in too. Now that they seem to have possibly sorted out the Becky situation, I’m happy again. The Smackdown side of Hell In A Cell is starting to build up well plus they only seem to be really building to one PPV on Smackdown so it makes sense. Unlike the 3 PPVs they seem to be building to simultaneously on Raw. That didn’t work earlier in the year. It won’t work now. Do them one at a time. Make them all special. It’s all about Smackdown once again.

About the Author: Nicky Bowe - Junior Executive Vice President of that feeling you get when you are walking alone at night and you're sure there's someone there. Nicky loves Wrestling, Video Games, Batman, General Nerdy Stuff, Pina Coladas and getting caught in the rain. He likes DDP Yoga and having half a brain. Quite fond of making love at midnight, doesn't need to be in the dune of a cape. If he's the author you are looking for, write to him and escape.
Related Items1AJ Stylesandrade cien almasbecky lynchbillie kaycarmellaCesarocharlottedaniel bryanGood BrothersIIconicskarl andersonluke gallowsnaomiNew Dayrandy ortonrecapreviewSheamusSmackdownSmackdown Livethe barThe ColonsThe Mizwrestlingwwe
← Previous Story Going In Raw – WWE Raw – 27th August 2018
Next Story → Going In Raw – WWE Raw – 3rd September 2018