Last week’s Smackdown was great. Last night’s Raw was bad. Is Smackdown Live back to being the A Show again? It sure looks like it’s heading that way.

This week’s show opened up with The Viper, The Legend Killer, The Ear Pulling Aficionado, Randal Keith Orton. He says that he heard theories of why he did what he did but he was here to set the record straight. He did it for The Rock…. no, he did it because of the people. Randy asks who is still around from when he debuted. He said nobody but I gathered a list. Ahem… Big Show, Goldust, Matt Hardy, Rhyno, Kane and you know, the guy he beat up, Jeff Hardy. He said that even though he’s been around so long, he doesn’t get the respect from the fans. Is this because he doesn’t do dives? Or because he doesn’t change his merch every week to rob the fans? Some shots fired here. More to come. 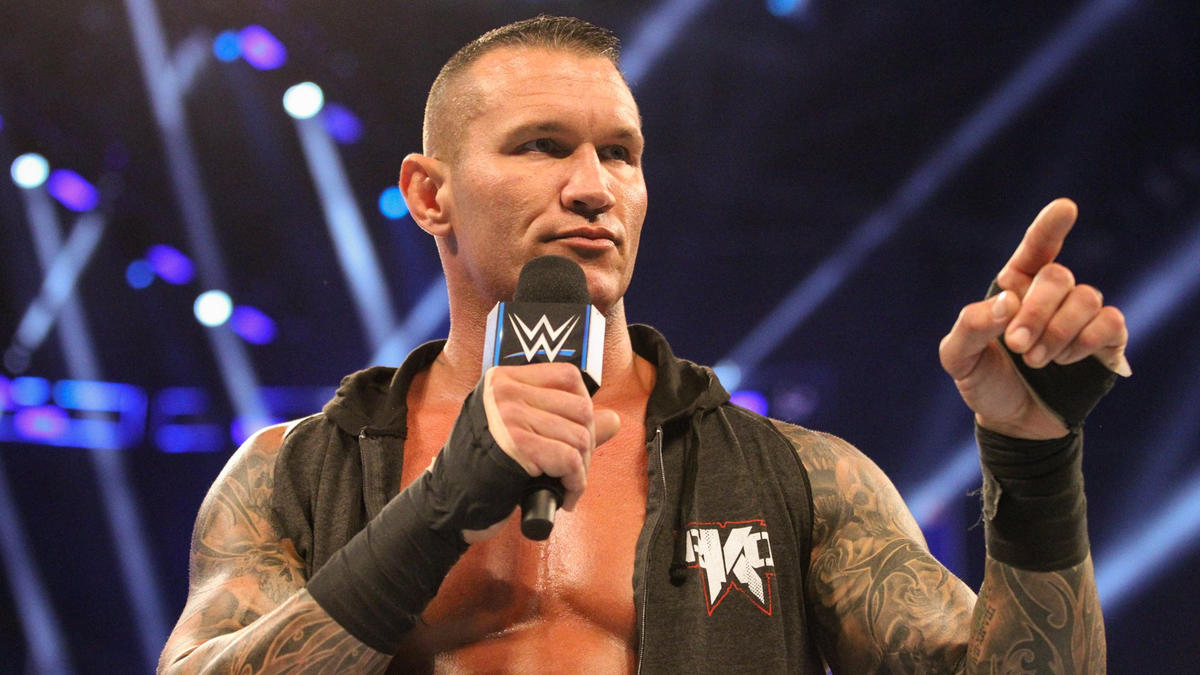 Randy says he didn’t steal hand gestures, he didn’t work in bingo halls. He started as a Legend Killer and now realises that it is the people who are the real legend killers. So he’s going after the wrestlers that they like. Randy says that he’s going to end Jeff Hardy’s career. And all we don’t need to refer to Randy by any of his nicknames. All we need to call him is 3 letters. R. K. The fans say the O and he drops the mic and walks off.

Killer promo from Randy here to open the show. I’m loving this new (old) Randy Orton. Heel Randy is Happy Randy. Happy Randy is a Randy who actually gives a shit. It’s nice when Randy gives a shit. He does great things. Bring back the Punt now too. And I’m not talking about the old Irish currency.

No Jeff on tonight’s show. He must be out rebuilding his ear. But we did get a selfie promo from Shinsuke Nakamaura who said asked Jeff if he can ‘ear him. Wonderful. He then said that Jeff’d been biten by the Viper, but be careful Randy, Shinsuke bites back. I’m guessing a Triple Threat at Summerslam between these three.

This is actually the section for the WWE Title match at Summerslam but that isn’t the biggest story here. Paige was in the ring with a contract for the title match at Summerslam and called out AJ Styles. Sidenote: AJ has a new shirt. It says Run The P1ace. That’s smart. I like it. AJ says that he can’t wait to defend the biggest title in the world, not just the WWE. Shots fired at Kenny Omega there. Paige says that his opponent will be… 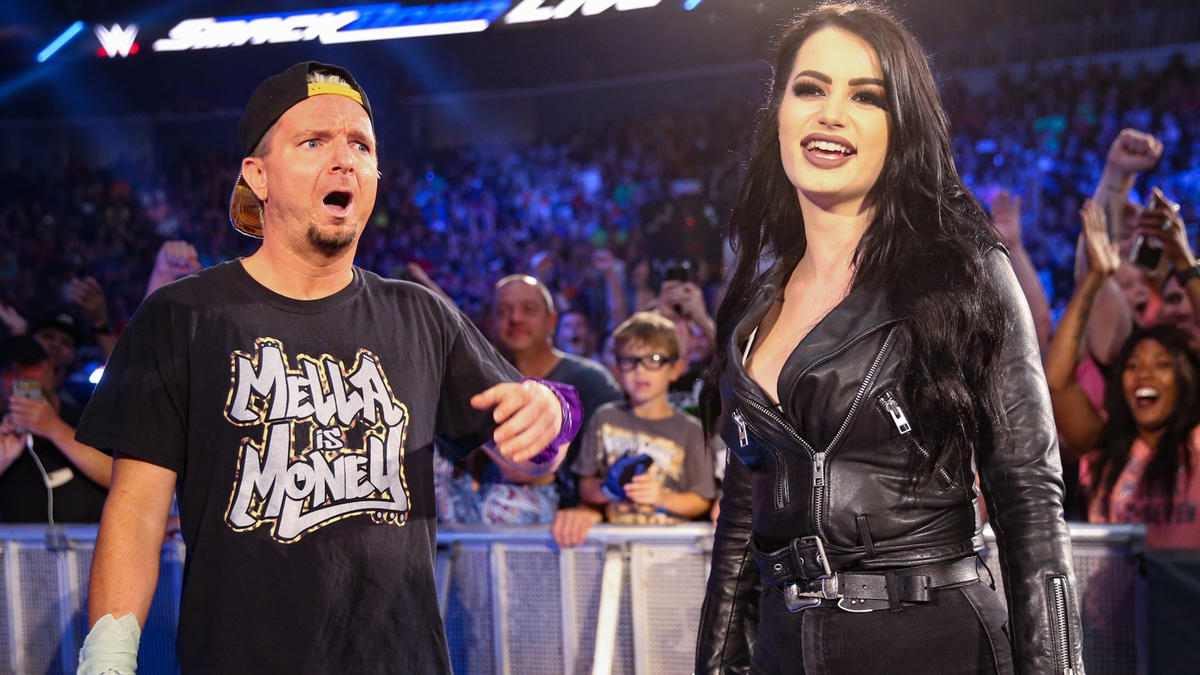 No Sweetie, I’m the one that opens my mouth like that

James Ellsworth’s music hits and he says that he’s already beaten AJ 3 times so the 4th time will be the charm. Paige tells him to shut up and that he’s a joke. Ellsworth then starts making fun of Paige’s appearance for being pale. Ah now Ellsworth, there is some much worse things you could be making fun of Paige about. Paige tells Jimmy Dream that she has 2 words for him. “You’re Fired!!!” All of Jimmy’s dreams shattered in an instant. Paige has security drag Ellsworth out and kicks him out the door herself. And Ellsworth is no more. There is a Twitter hashtag of #RehireEllsworth. I suggest you all get on board.

While all of this is going on AJ gets attacked in the ring from behind by Samoa Joe who then signs the contract for the title match. So we are getting AJ Styles vs Samoa Joe for the WWE Title at Summerslam. That should be a cracker of a match. Now let’s hope they don’t ruin it by overdoing it like they did with AJ and Shinsuke.

EVOLUTION IS NO LONGER A MYSTERY

After the announcement of Evolution, the stable of HHH, Randy Orton, Batista and Ric Flair getting back together, last night on Raw, we had a couple of women’s segments and matches on this week’s Smackdown. Asuka was first interviewed about Evolution in which she got a little excited and needs to CALM THE FUCK DOWN. She also said that Billie Kay is not ready for Asuka. They then had a match which Asuka won pretty handily with a Spinning Kick to the head after Peyton tried and failed to get involved.  Asuka also had a fancy new mask. 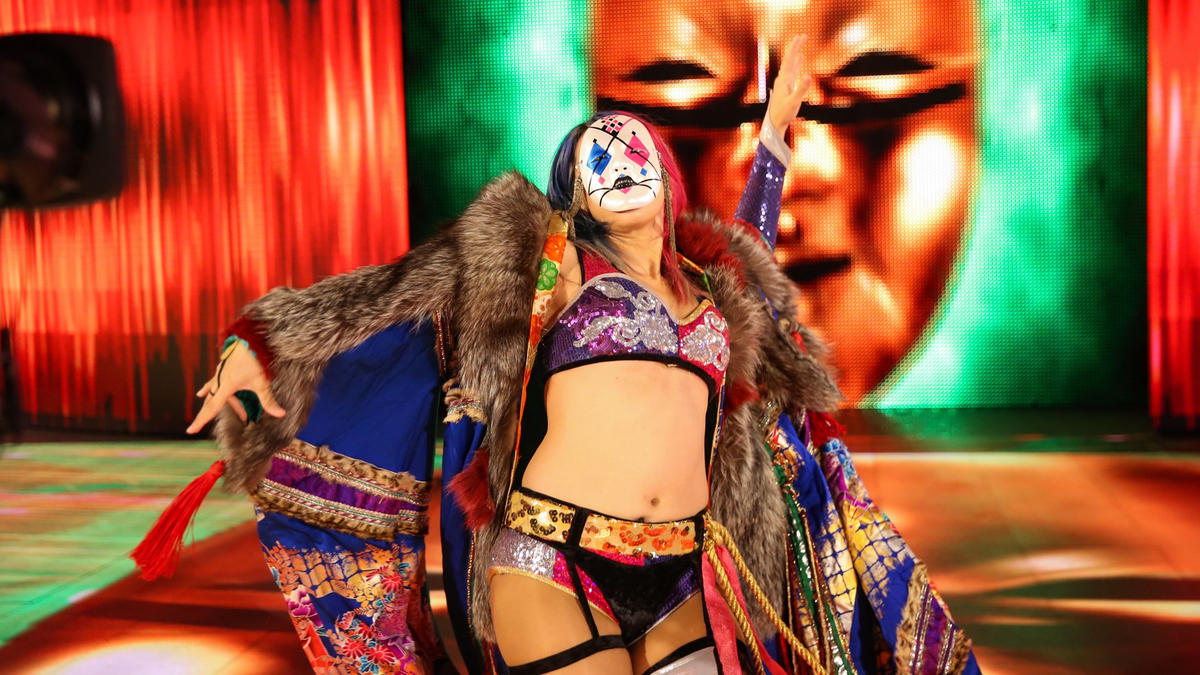 Asuka coming to Purge some bitches

The 2nd ladies bit of the night was Becky Lynch’s match against the champ in which if she beat the champ, she could face the champ. Before the match, Carmella ran into Paige. Carmella was of course notably distraught at the firing of poor Jimmy Dream. Paige told her that since ‘Mella is money, she can go buy herself a new boyfriend. Carmella says she’s gonna stay champ until the first ever women’s PPV Evolution because she beat Charlotte twice, she beat Asuka twice, and now she’s gonna beat Becky.

Announcer voice: “But she did not beat Becky”. Carmella tapped out to the Dis-Arm-Her to lose the match. This means we have Becky Lynch vs Carmella for the Smackdown Women’s Title at Summerslam and god I hope Becky wins. This isn’t just the Irish in me. She deserves it. She’s been killing it lately. In regards the match, if you want to check out a super pun filled description of it, I’d recommend checking out Becky Lynch’s Instagram Story. 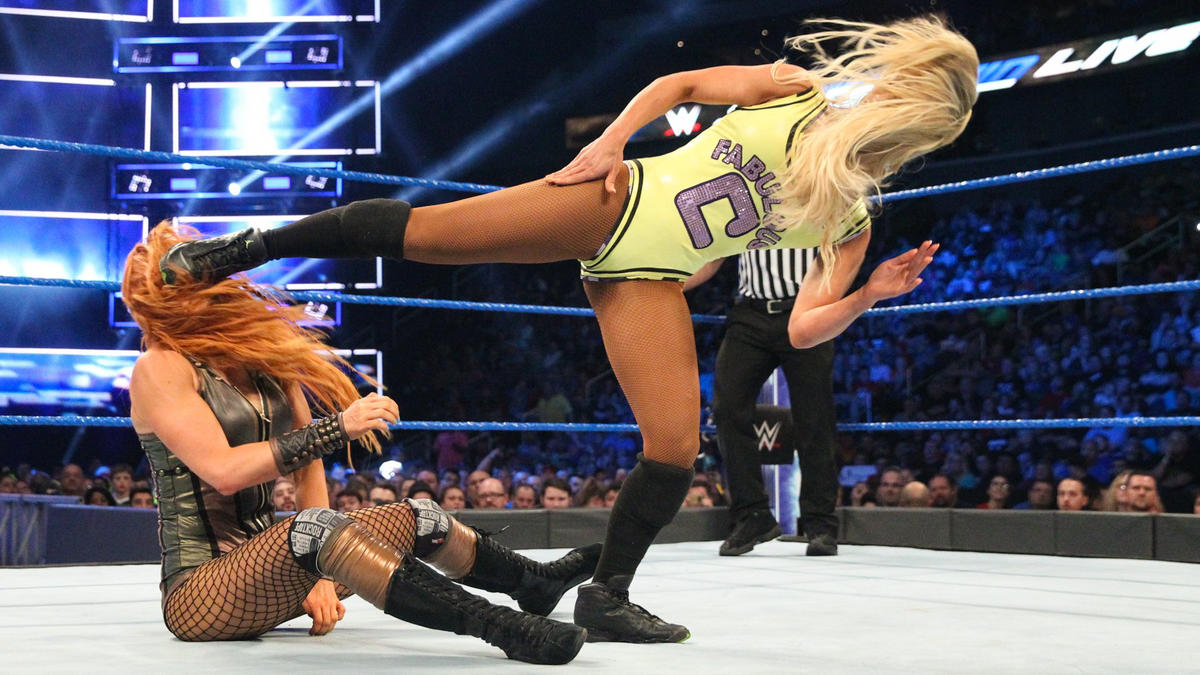 The Battle of the Cousin ITs went really well

It was the big night. Miz and Mrs debuts immediately following Smackdown Live and Miz is having Premiere Party to close out Smackdown heading into it. He, Maryse and baby Monroe Sky arrive in a limo at the start of the show. Note that the baby does not have a tan. It’s clearly whiter than them both. My wife pointed that out. I just thought I’d bring it up. Paige tried to find the Mizanins a babysitter for Monroe Sky for when they had to go out to the ring but they weren’t impressed with the choice of Sin Cara so they brought the baby out with them to the ring instead. Completely safe environment for the baby here. 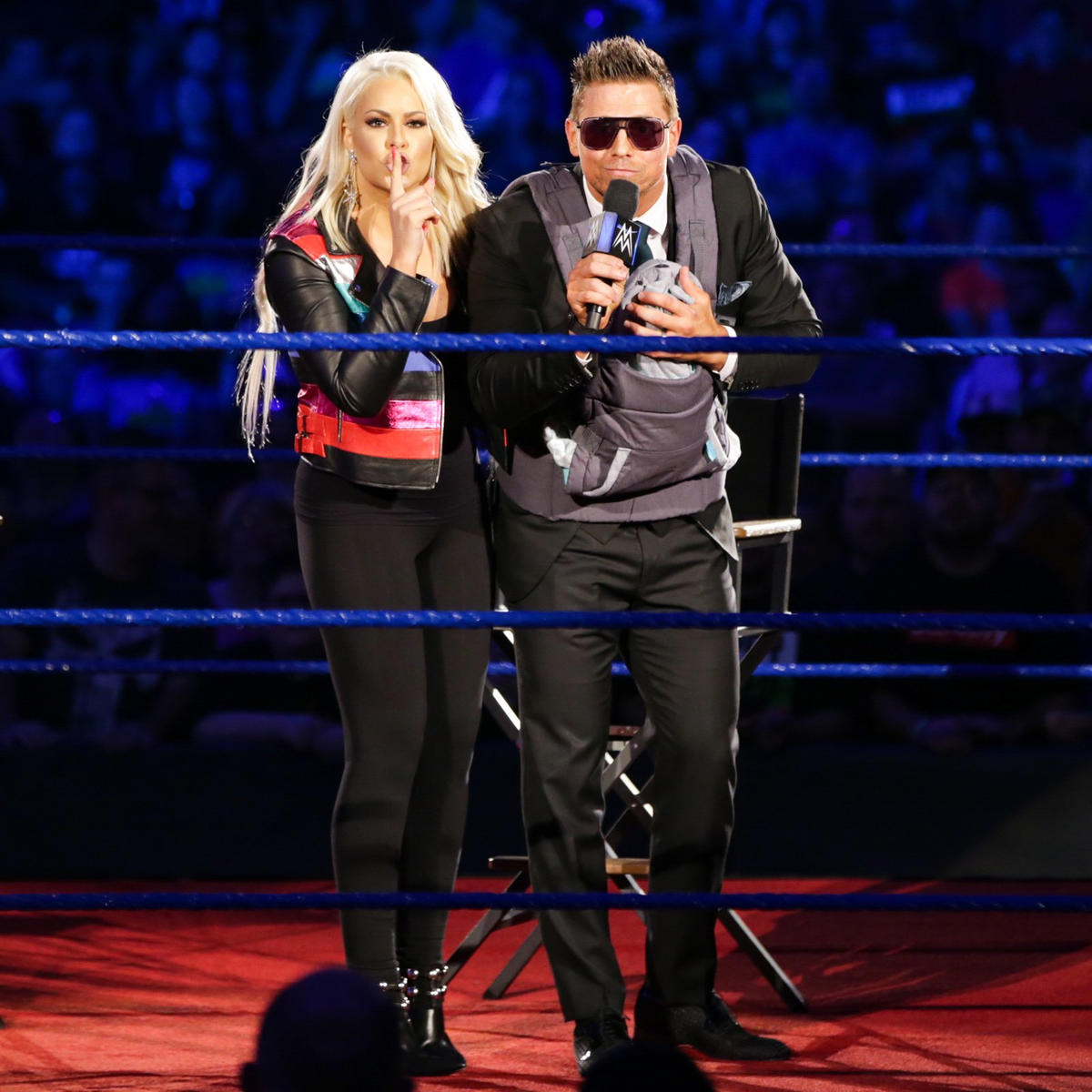 The quietest baby in the world sat in a baby carrier facing The Miz so all we can see is the back of the carrier and some static legs hanging out of it. Apparently she’s “asleep”. Miz has an exclusive  preview of Miz and Mrs for us all right now and a clip is played of embarrassing Miz moments from throughout his career. Mike ain’t happy about this and Daniel Bryan appears on the screen. He said that was his doing and he’s going to join the party and apologise to Miz in person. He makes his way down to the ring but gets stopped at a velvet rope by security who he promptly beats up.

Once Bryan gets in the ring, Miz throws “Monroe Sky” at him, kicks him and then hits the Skull Crushing Finale barely missing the baby lying on the floor beside him. How cruel. The baby has gone catatonic with shock from all this. Miz then shocks us all by revealing that it was a doll all along and the baby backstage was an actor. He wouldn’t bring his daughter to a city like this (we’re in Evansville, Indiana for those wondering). If you want to see Monroe Sky, you can tune into Miz and Mrs on the USA network and it will be AWESOME!!!. 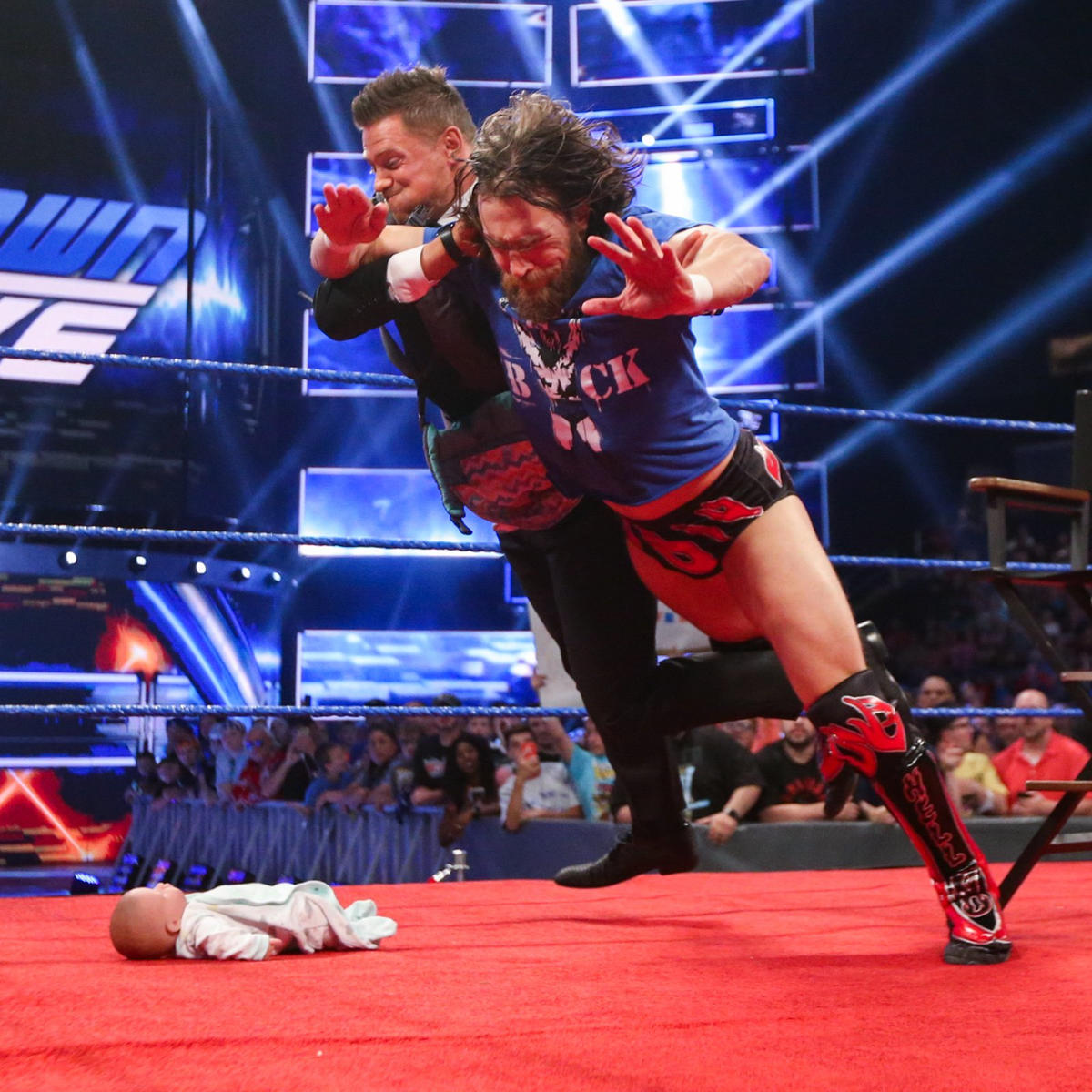 Great heel work by Miz here despite the obvious doll baby. And hey, at least Snitksy didn’t show up to punt the baby. That’s good, right? Note: I did not watch Miz and Mrs. I watched 205 Live. I feel I made the better choice. 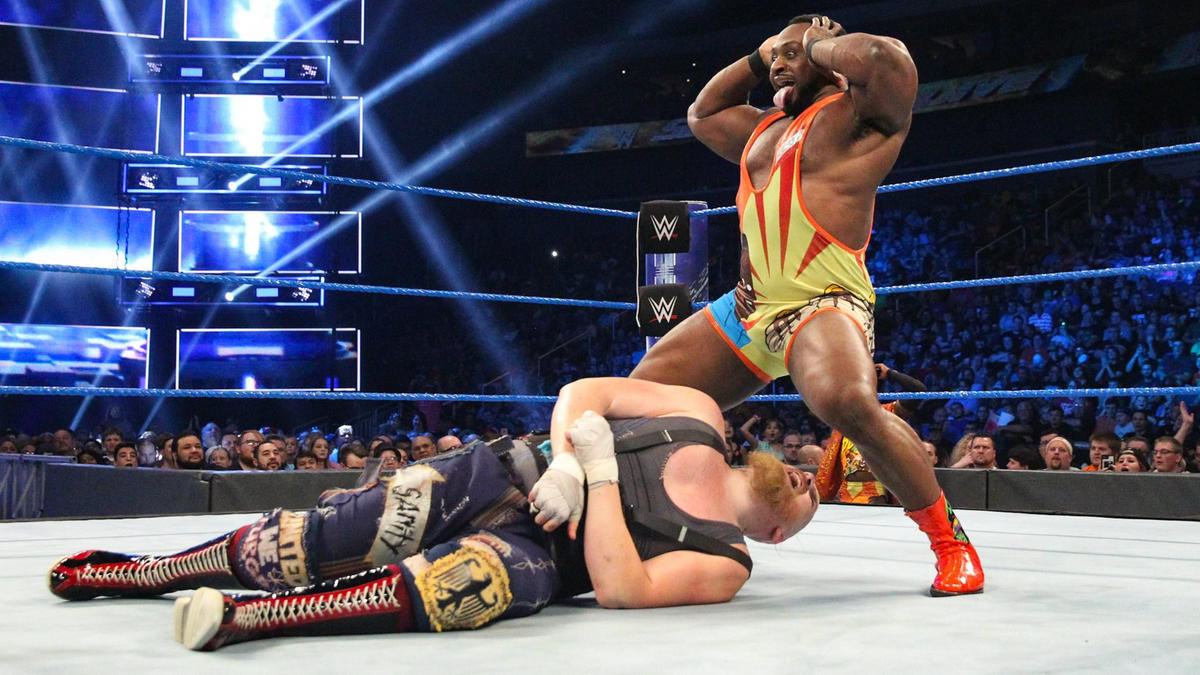 Wolfe looking right at the eye of the storm 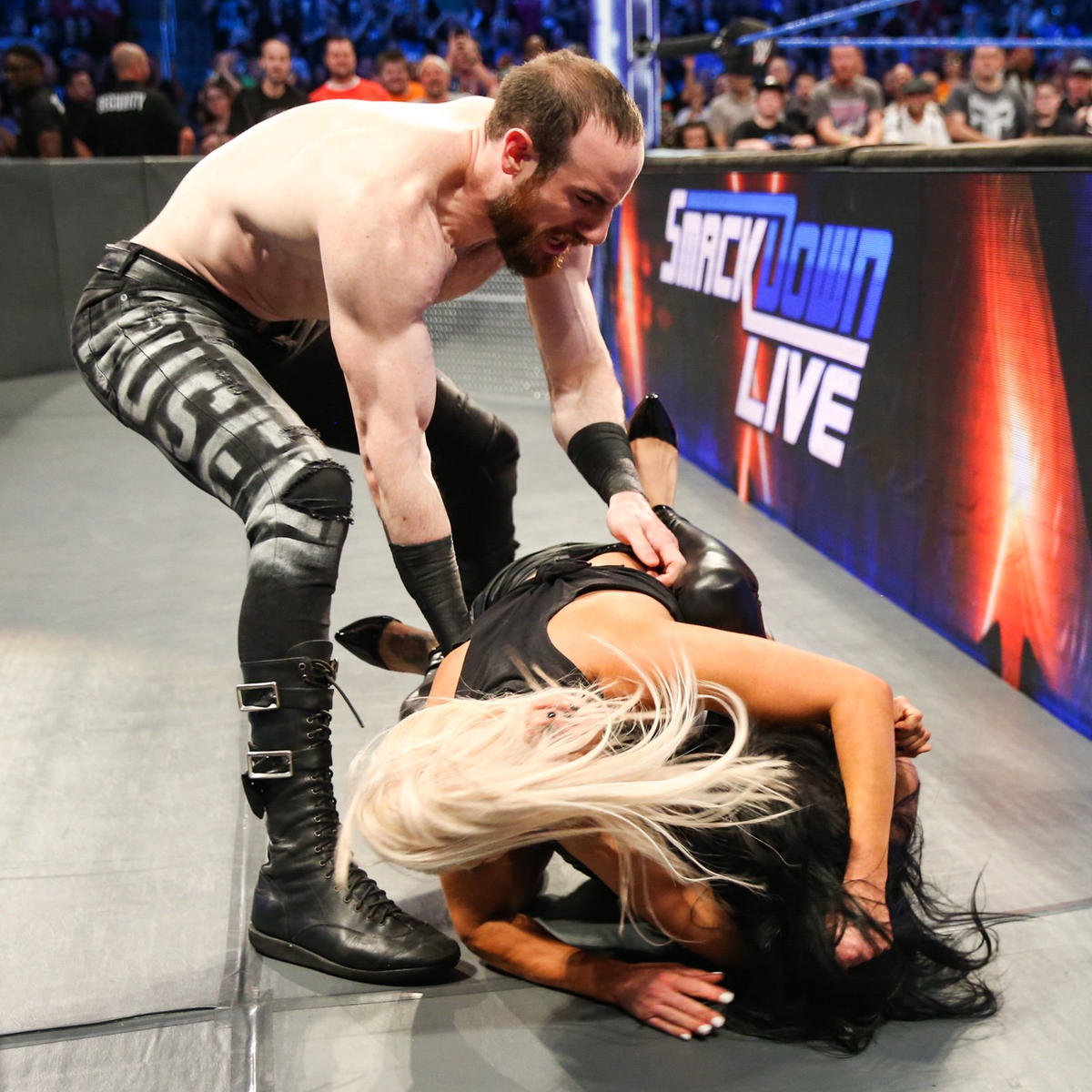 Another really good Smackdown Live this week. All the Smackdown side of Summerslam is shaping up nicely. AJ vs Joe, Miz vs Bryan, Becky vs Carmella, all the Randy Orton stuff, it’s all good. The pacing of the show was perfect too. As much as I love a good long wrestling match, sometimes the stories are more important. Of the 5 matches on the show tonight, I put 3 of them in the other stuff happened section of this article. They weren’t bad matches but the matches weren’t the star of the show here. The storylines were. The big long entertaining matches should be at PPVs. This is what weekly TV is for. This is weekly TV done right.

They seem to have kicked things into another gear the last couple of weeks. Maybe it’s due to the new TV deals and the fact that Smackdown will be on network TV so they want to get the quality up. But that’s over a year away. Can they keep the quality up for that long? They are off to a good start anyway.

About the Author: Nicky Bowe - Junior Executive Vice President of that feeling you get when you are walking alone at night and you're sure there's someone there. Nicky loves Wrestling, Video Games, Batman, General Nerdy Stuff, Pina Coladas and getting caught in the rain. He likes DDP Yoga and having half a brain. Quite fond of making love at midnight, doesn't need to be in the dune of a cape. If he's the author you are looking for, write to him and escape.
Related ItemsAJ Stylesandrade cien almasasukabecky lynchbillie kaycarmelladaniel bryanJames EllsworthNew Daypaiger truthrandy ortonrecapreviewrusevSamoa JoesANitYSmackdownSmackdown LiveThe Mizwrestlingwwe
← Previous Story Going In Raw – WWE Raw- 23rd July 2018
Next Story → Going In Raw – WWE RAW – 30th July 2018