With Extreme Rules happening this Sunday, Raw this week had the lowest viewership ever. There was a reason for that. It was not good. Not good at all. Smackdown has decided to counter this by giving us yet another AJ Styles vs Shinsuke Nakamura match. Will the Dick Assassin return to his cockpunching ways? Or is this bound to be a cluskerfuck of interferences? I’m gonna go with the latter. But let’s find out.

Even though it wasn’t the main story on the show, since I did the whole intro on it, let’s start out with the AJ/Shinsuke match. Earlier in the day on Twitter, we posted this.

We know how this goes…

So let’s see how we did in our predictions of how this was gonna go.

We are told that this Sunday is Shinsuke’s first opportunity since MITB to win a championship here in WWE. So his first opportunity since the last PPV. Poor Shinsuke not getting any opportunities. Before the match starts, Rusev and English come out. Good omen for our predictions. Rusev is now planning on destroying AJ’s house now. Would he not move in like he said last week? You can’t live in a destroyed house. Rusev ends up on commentary for the match and has some fantastic lines such as:

“I came out in a tank. How many people come out on a tank?”

“It is I, Rusev from Rusev Day. And this is Aiden.”

“He’s like an open book to me. And I go to the library quite often”

Rusev also said that he will buy Shin some flowers later for weakening AJ. And that he has 4 escapes for the Calf Crusher because he has big quads. The match was going on during all of this golden commentary and made it’s way to the outside where Aiden gets in AJ’s face and then gets cold clocked. Shinsuke went for the Kinshasa but misses AJ and hit English instead.  This prompts Rusev to pull AJ off the apron causing a DQ. Ok, so that’s 1 down. Rusev and Shinsuke double team AJ. 2 down. Jeff comes out and makes the save. That’s 3 out of 6 now. Just 3 more to go. 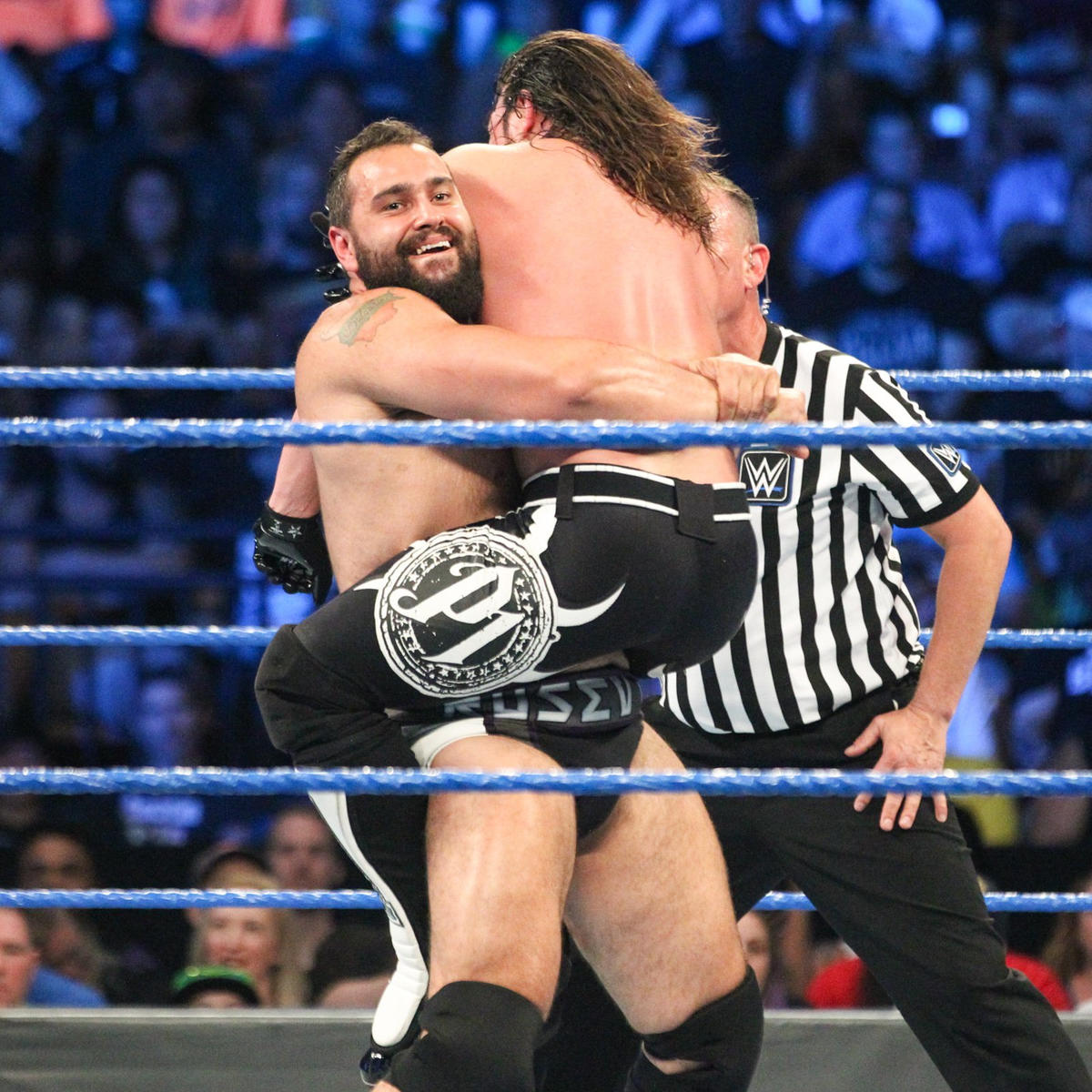 Amidst all the commotion, out comes Paige and surprise, surprise, the match is restarted RIGHT NOW as a Tag Team Match playa, holla holla, thuggin n’ buggin, and so on and so forth. So that’s now 5 out of the 6. How will the match end? Why it’s a champion being pinned on TV 5 days before a PPV title defense. It was the US Champ that got pinned as Rusev pinned Jeff after hitting a Machka Kick but the point still stands. That’s 6 for 6 for 2Bit predictions for this segment. Gotta love the unpredictable nature of a Live WWE show, eh?

The main story of the show was around the tag team division who had the opening and closing segments of Smackdown this week. We opened up with Miz TV where the guests were Daniel Bryan and Kane. Miz started addressing eliminating Daniel last month and Kane stops Daniel from punching Miz in the face. Miz informs Team Hell No that they were Tag Team Championship. They sure were Miz, sure they were. I now give you, without context, an exact quote from the devil’s favorite demon Kane during this exchange “N-Sync will never reunite, JT is just too big a star now”. 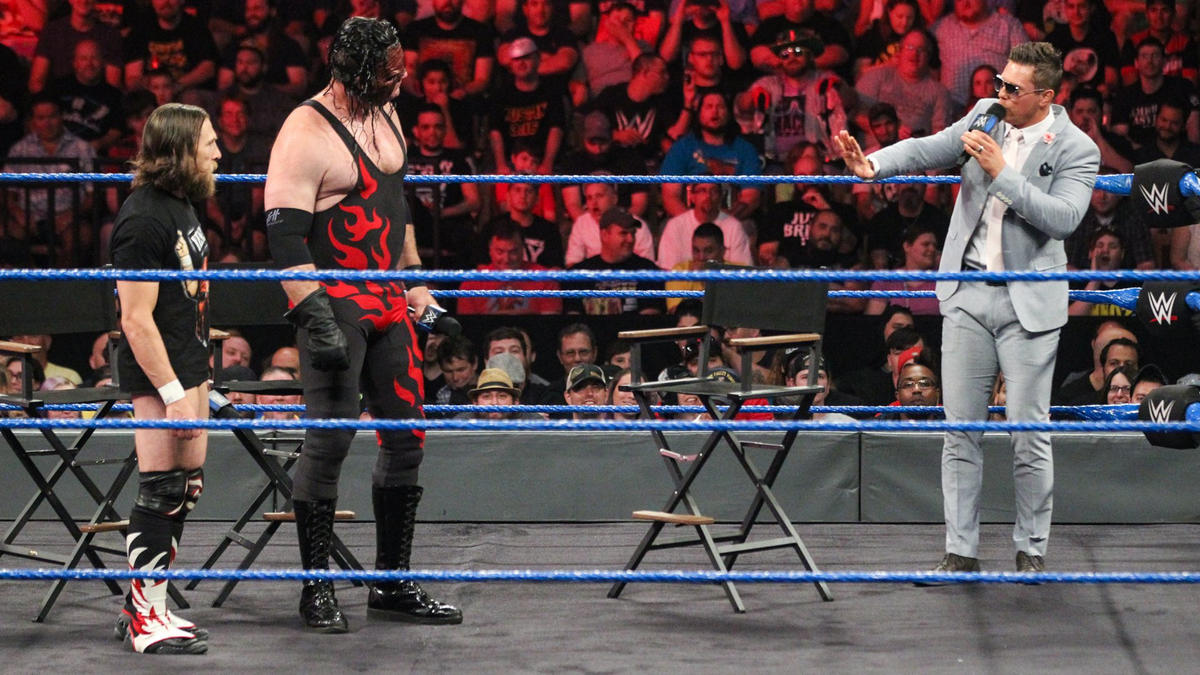 Why does nobody ever use the chairs dammit? We used the pyro budget on them.

After they all agree that N Sync won’t reunite, Miz then starts stirring shit. He “accidentally” shows footage of the arguments and the attacks a few years ago between kane and Daniel Bryan. Daniel and Miz then have a nice back and forth:

Daniel: “You’re The Miz and you’re terrible at everything. The only thing you’re worse at that stirring the pot is wrestling.”

Miz: “Ever since you came back from injury, all I have thought about is being the man responsible for ending your career for good.”

WE’LL GET THAT MIZ/BRYAN MATCH EVENTUALLY

Kane keeps Daniel calm with breathing exercises and Miz says that Daniel is hiding behind his broken down demon. Kane is not best pleased about this and grabs Miz for a Chokeslam but the Bludgeon Bros music hits and they make their way down the ramp. Before they can get there though, SAnitY’s music hits and they appear kin the ring attacking Daniel while BB attack Kane. The New Day come out to make the save but the heels end up getting the upper hand destroying the others.

If you, like me, know how WWE like to do things, you may know what’s coming next. In the main event, it’s gonna be a 10 Man Tag Team Match. And Teddy Long is somewhere having a stroke at the excitement. Or that could be the epileptic fit he’s having from SAnitY’s entrance. Hard to tell. Building up to the main even match, Team Hell No and New Day talk strategy. D Bry thinks they should take their opponents out at the knees. Kane wants to set them on fire and drag them to hell. Big E rallies the troops. Kane quotes NSync lyrics. Seems to be a theme of the night. 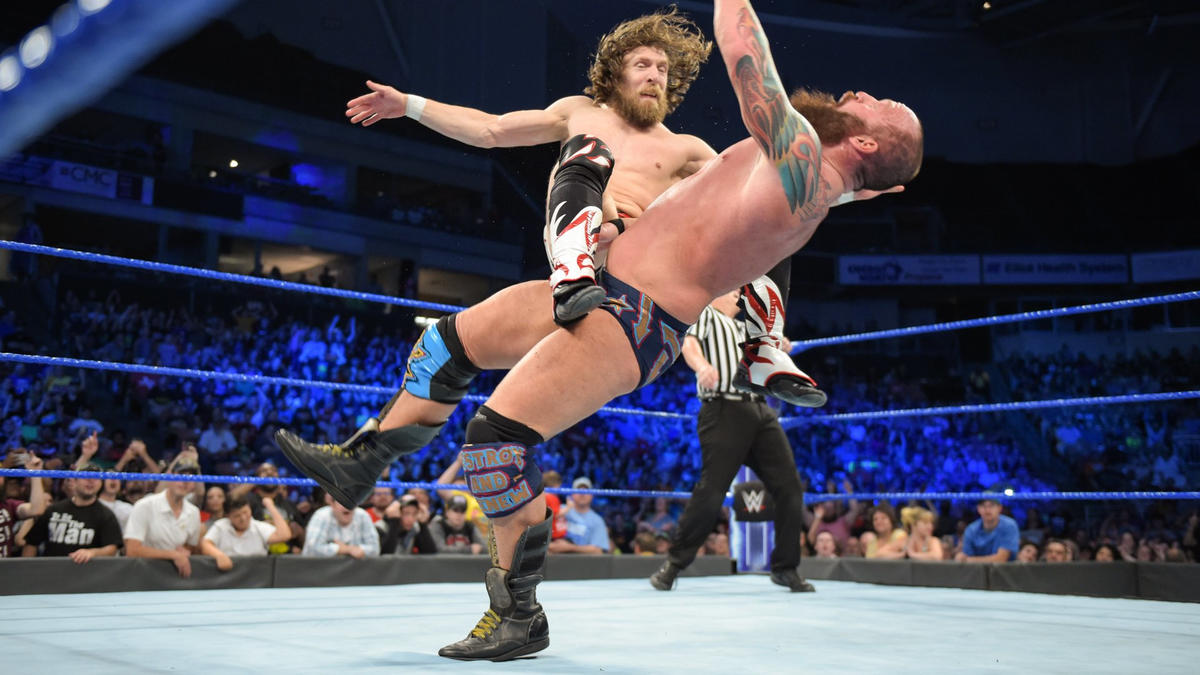 SAnitY and BB also had a backstage promo where they talked about Chaos and Bludgeoning. You know, nice cheery stuff. The match came around anyway and everyone else joined Teddy Long in epilepsy induced seizures during SAnitY’s entrance. It was a pretty decent match with a lot of moving parts. The majority of the match saw the heel team work over Woods. After a flurry of finishers from all involved, Daniel Bryan picked up the win on Eric Young after a Running Knee. Kane then tried Daniel’s Yes chants before Daniel managed to make fire pyro happen much to Kane’s shock and awe.

Asuka and James Ellsworth had another go at a match this week. This time however, we had the entire Smackdown women’s roster at ringside to make sure that everything stayed in the ring. This one was a Lumberjack match. Or if you believe Byron, Carmella is a Lumberjack match. In a shock to nobody in attendance, all the women at ringside ended up brawling with each other. In the mayhem, Ellsworth tried to escape but was carried back to the ring by Becky and Naomi. 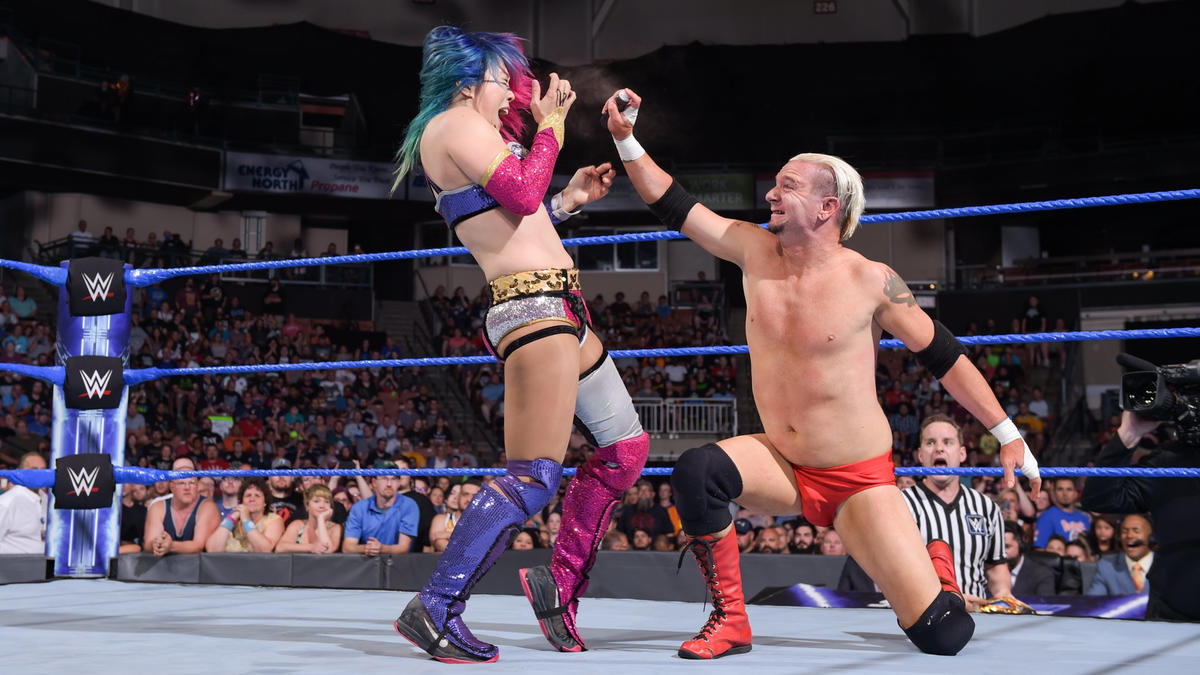 This is how I get all my dates

Asuka then dived on everyone except Ellsworth who was given some spray by Carmella. Asuka stopped him before he could use it and he ended up tapping out to the Asukalock. After the match, Ellsworth did manage to get Asuka with the Spray and Carmella hit her with a Superkick to stand tall over her. Backstage later, Paige runs into the celebrating Carmella and Ellsworth and after James tries to get Paige to “Kiss these lips” (expect a tshirt soon), Paige informs them that Ellsworth will be suspended in a Shark Cage above the ring for the Title match on Sunday. Still trying to shift those Shark Cage playsets, I see.

We finally got the long awaited Sin Cara vs Andrade ‘Cien’ Almas this week. And it didn’t disappoint. It was a quick enough match but it was really good. Probably the best I have ever seen Sin Cara (who I just found is nearly 41, WTF?). This was also Andrade’s first main roster TV match that wasn’t a squash match against a jobber so he got to finally show what he can do. 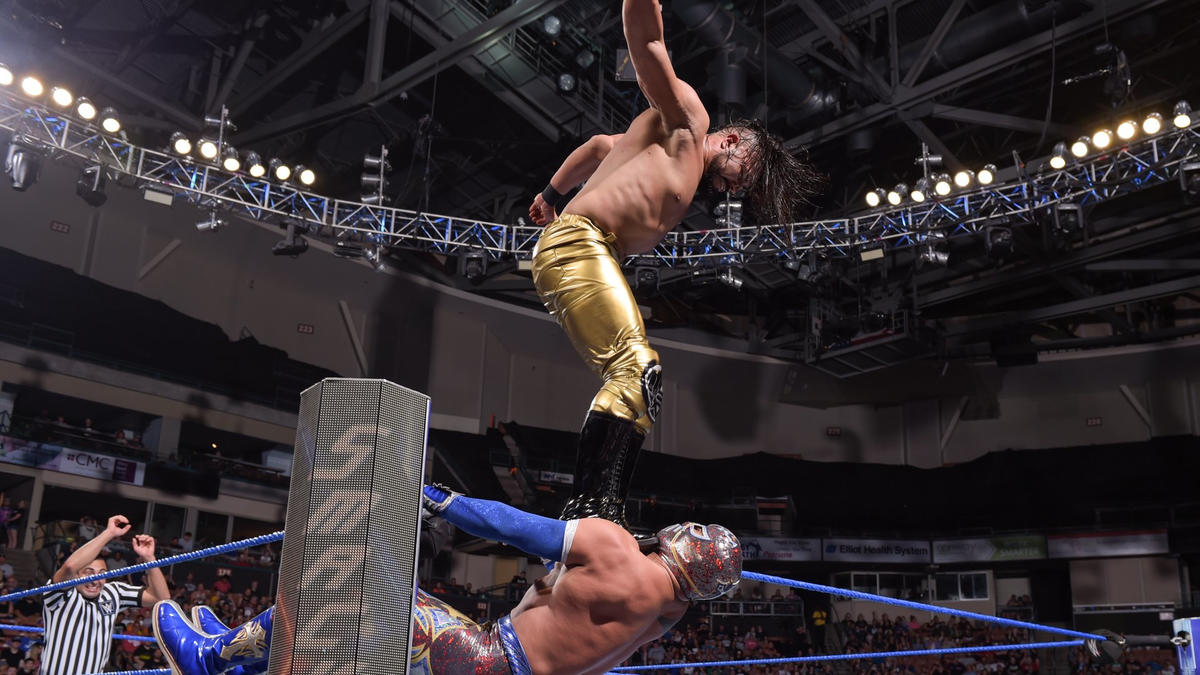 I don’t have a funny caption for this one. I just thought it was a great shot.

They may also be dropping the Andrade part of Almas’s name as the titantron just said Cien Almas on his entrance. Everything else still had Andrade but they do love cutting parts of names so I wouldn’t be surprised to see Cien Almas going forward. Almas picked up the win anyway with a Double Knees in the corner after a Diving Double Foot Stomp to a hanging Cara on the outside.

It definitely wasn’t as bad as Raw. It was still very predictable and by the numbers which is what go home shows tend to be nowadays which is a shame. Both of the first 2 segments on Smackdown ended the exact same way, a brawl which was then made into a tag match. At least space them out a bit.

We also had one of my pet peeves which is ads for the upcoming PPV in the middle of matches. This happened during both tag matches on the show and it completely takes you out of the match. You have plenty of time to advertise these things. You show all the promos a million times anyway. you don’t need to do it during matches too.

So that’s all for now folks. Baby bye, bye, bye.

About the Author: Nicky Bowe - Junior Executive Vice President of that feeling you get when you are walking alone at night and you're sure there's someone there. Nicky loves Wrestling, Video Games, Batman, General Nerdy Stuff, Pina Coladas and getting caught in the rain. He likes DDP Yoga and having half a brain. Quite fond of making love at midnight, doesn't need to be in the dune of a cape. If he's the author you are looking for, write to him and escape.
Related Items1AJ StylesasukaBludgeon Brotherscarmelladaniel bryanJames Ellsworthjeff hardykaneNew DayrecapreviewrusevsANitYShinsuke NakamuraSmackdownSmackdown Liveteam hell noThe Mizwrestlingwwe
← Previous Story Going In Raw – WWE Raw – 9th July 2018
Next Story → Going In Raw – WWE Raw – 16th July 2018