Ladies and Gentlemen, it’s Smackdown Live time of the week again. Team Hell No are back together, we’re getting Asuka vs Ellsworth, and I’m sleepy as fuck, the European way to watch WWE. So let’s do this thing.

The main story on Smackdown this week was all about Team Hell No. We started out the show with Renee Young in the ring interviewing Kane and Daniel Bryan. She questioned their differences in the past. Daniel: “Sometimes we fight, sometimes we hug, but we always deliver.” Kane said that Daniel can have a bit of a temper and he was going to get hurt with BB so he is always the demon watching his back. Daniel decided that Kane was not actually always looking over him bringing up Kane tombstoning him everywhere when it wasn’t even a match and trying to abduct his wife. Kane: “Let’s not dig up the past, this is a fresh start.” They get in a YES, NO off which ends with the Uso’s music hitting. 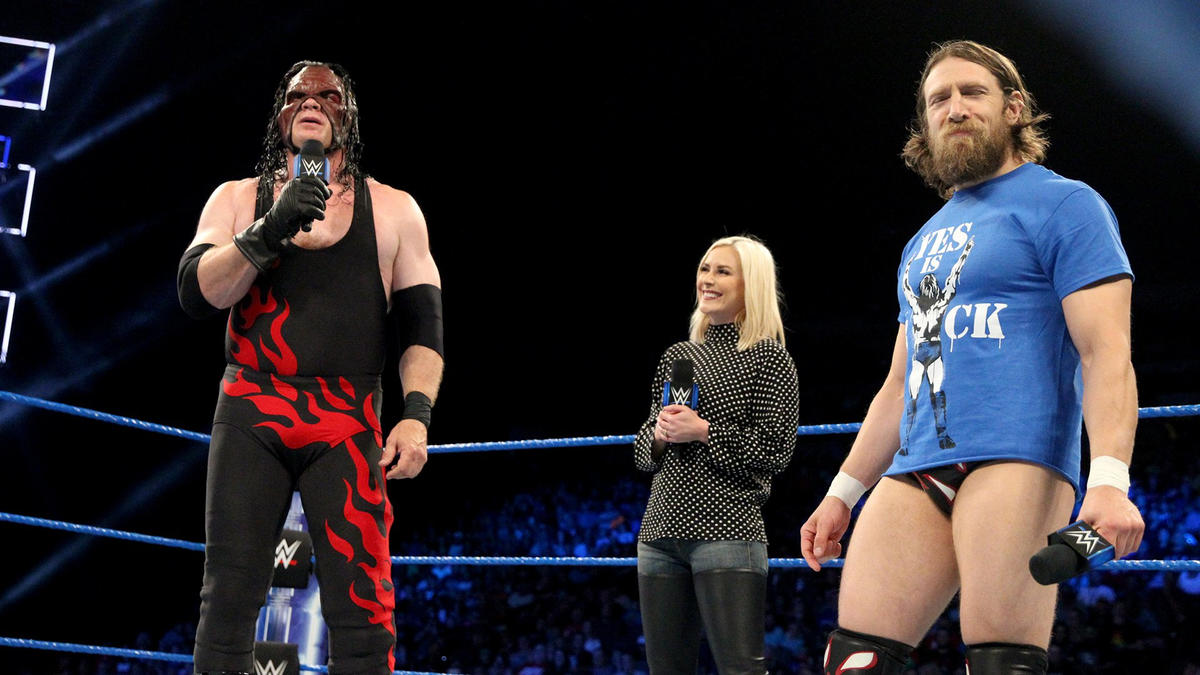 Kane’s attempts at Standup comedy were getting less filled with descriptions of graphic dismemberings….progress?

The Usos said that Team Hell No don’t deserve an opportunity for tag team titles just because they hugged. The Usos then hug it out 4 times so now they get 4 title shots. D Bry issues a challenge but Kane says they need to discuss it as a team. Paige comes out and says that the match is still on for Extreme Rules for the, and I quote, “Smackteam tag team championships.” She makes Team Hell No vs The Usos for the main event and if the Usos win, they will be added to the title match. Later on before the match, we had some more Kane and D-Bry shenanigans in the Boiler room with Kane saying that Daniel was like a brother to him which was retorted with “You set your brother on fire”. Lovely stuff. 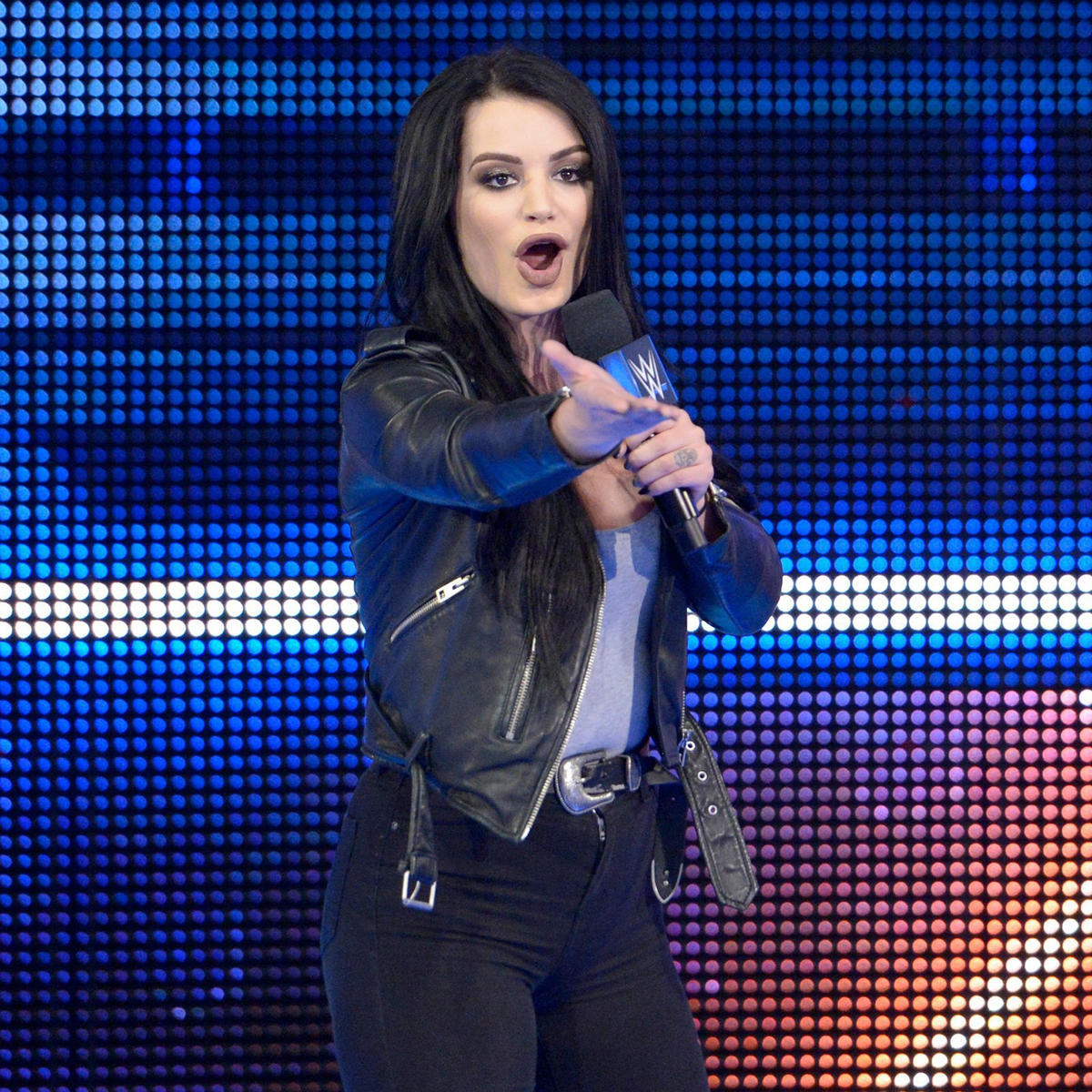 The match itself was pretty good. The announcers were bigging up Hell No having a lot of ring rust. The match finished up with the Usos hitting 3 Double Superkicks, then going for the Double Splash. Kane catching both of them by the throat from the Slash before a Running Knee and Chokeslam put the Usos away. After the match, the Bludgeon Brothers came out on the ramp and stared them down awkwardly to end the show.

It’s the 3rd of July, just one day away from Independence Day so that’s good enough for WWE. It’s time for the Independence Day US Title Open Challenge. Jeff is talking about Bald Eagles instead of brains this week. He is painted up like America in the red white and blue (it looks like a Union Jack). 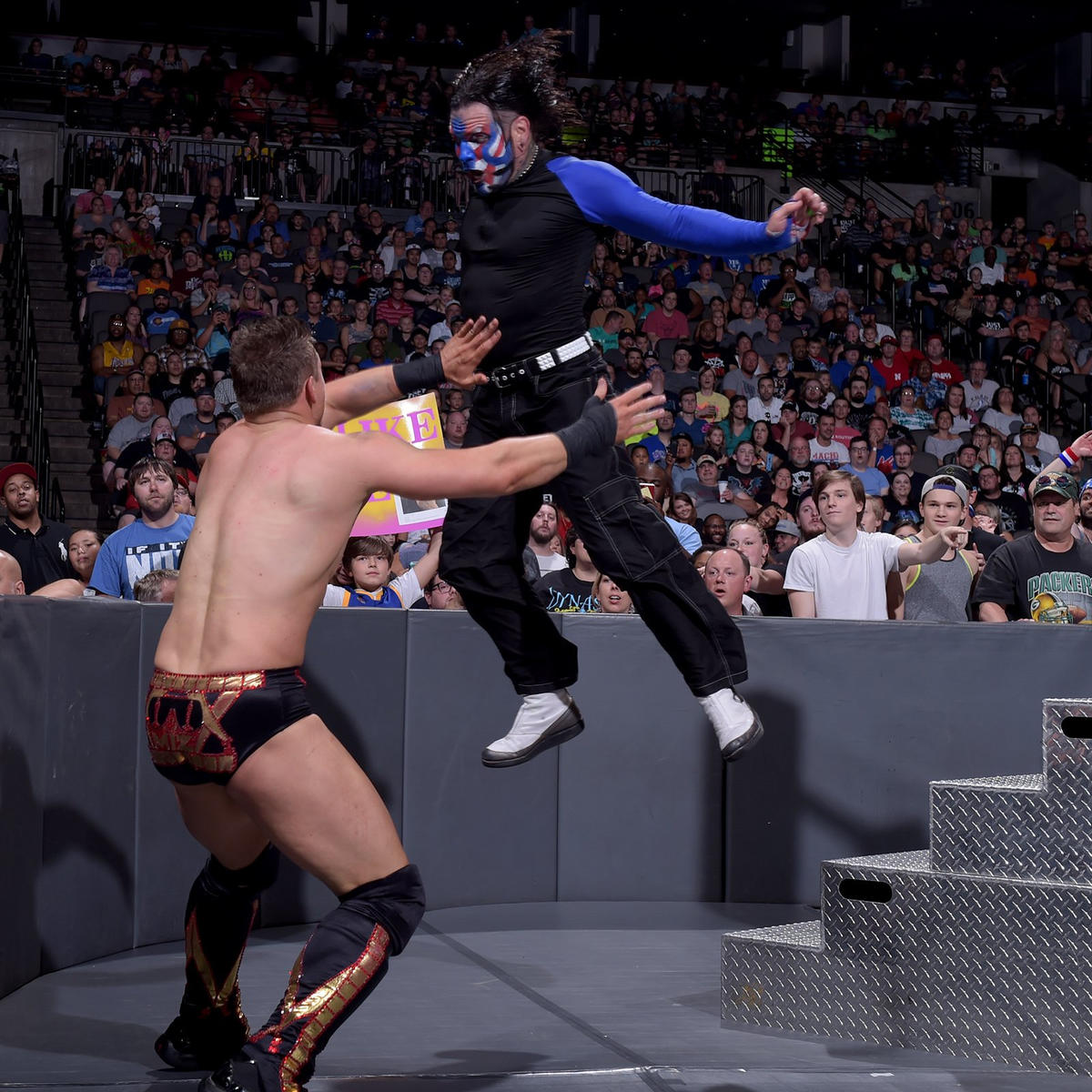 Miz accepts the challenge this week and they have their match. I feel like Jeff hasn’t looked great in this US Title run. He just seems to be a step off. No real botches here but just not his usual self. Maybe it’s just because of all the shit he’s put his body through over the years. The finish comes when Jeff hits a Whisper in the Wind, Miz then rolls Jeff up and puts his feet on the ropes. The ref notices and stops the count. Jeff then hits a Twist of Fate and a Swanton to pick up the win.

In sticking with the 3rd of July theme, the New Day had a 3rd of July Pancake eating contest. In hearing this news, Corey says “ugh”. It’s like he is channeling everyone. In fairness, it wasn’t as bad as the last pancake eating contest they did which had a grand total of zero pancakes eaten at the end. They didn’t even get a chance this time around. Byron Saxton hosted it wearing a stupid hat. Each of The New Day had 5 minutes to eat as many of the red, white and blue pancakes as they could. 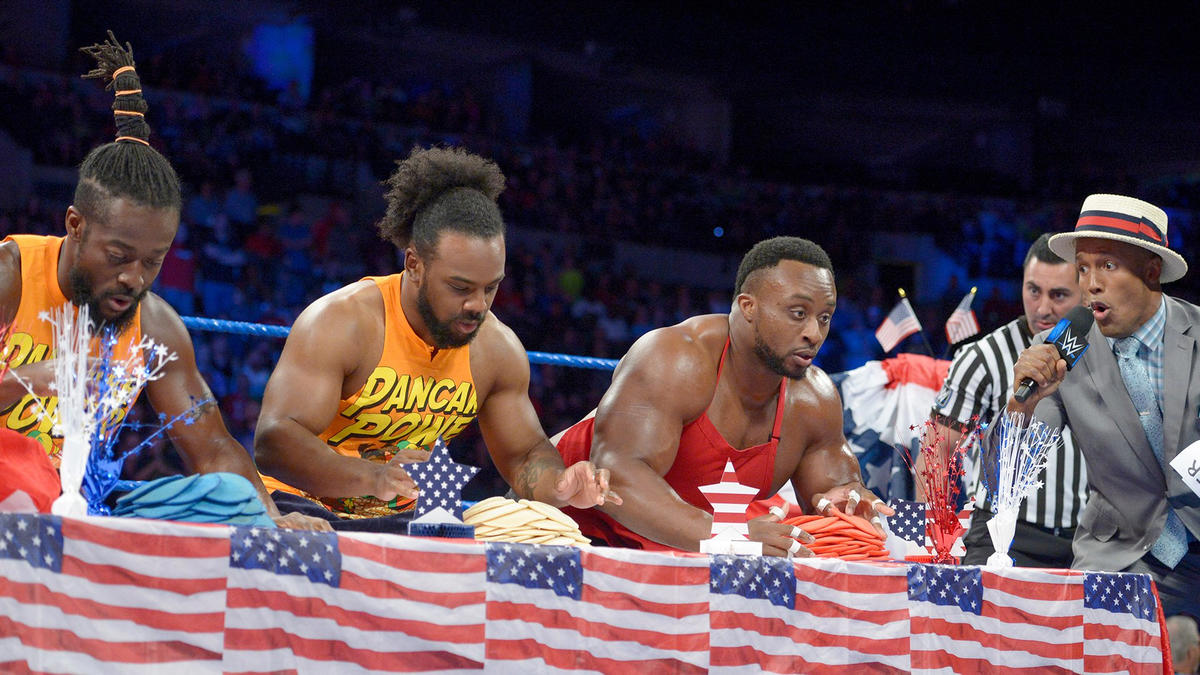 The first bites were being taken when SAnitY attacked. It seems that their beef with the Usos is done and with it probably the chance of Nikki Cross coming up to join them. SAnitY proceeded to destroy all the members of the New day. They threw Kofi over the top rope, threw Big E into the ring steps and over the announce table, and put Woods through a table.

BATTLE OF THE SEXES

In the biggest Battle of the Sexes since the tennis match between Billie Jean King and Bobby Riggs (as WWE told us), Asuka and James Ellsworth faced off in the ring. Before the match, Asuka cut a promo saying that “Men, women, sexist pigs, it doesn’t matter who I face. They all feel the pain. James Ellsworth is not ready for Asuka.”  Ellsworth retorted by saying that men are the superior specimen and that “Some women aren’t ready for Asuka. I’m no woman, I’m all man. Mella is money, Ellsworth is exquisite.”

In the epic battle, Carmella came out before the bell rings and joined commentary. Ellsworth started warming up, then kept leaving the ring and going over to Carmella. He eventually stay in the ring for a couple of seconds and gets slapped. He then runs off through the crowd with Asuka in pursuit. We get a Double Countout and then they make it back to the ringside area just in time for Carmella to attack Asuka from behind. 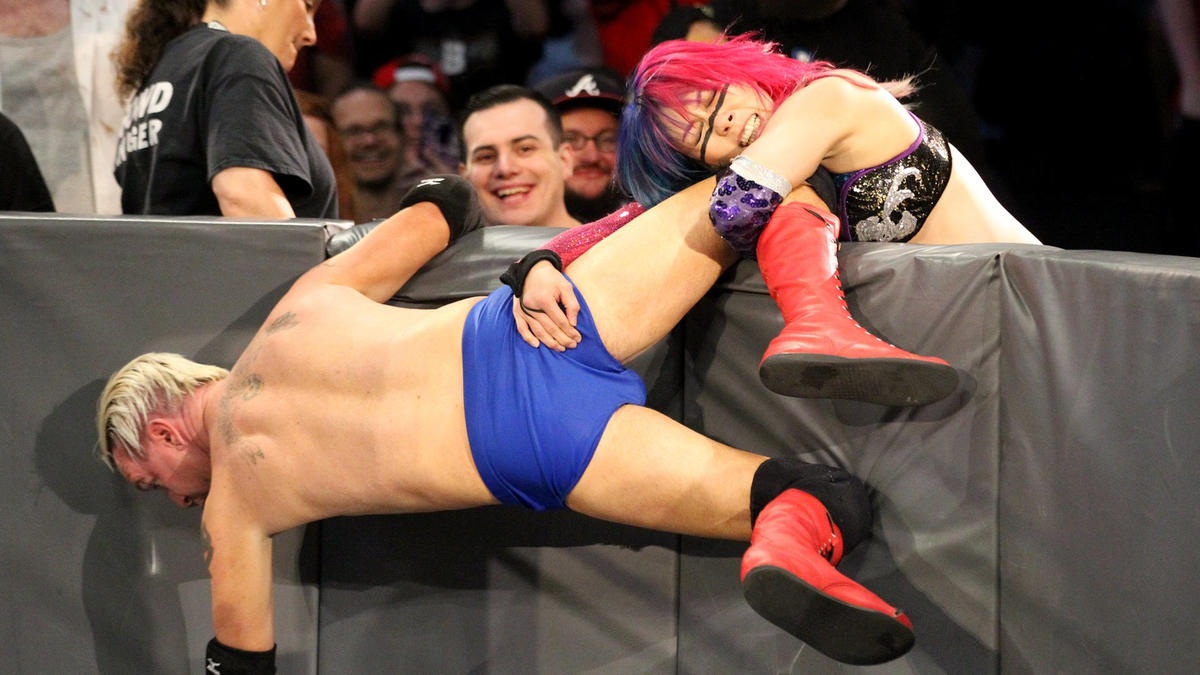 Later on, we catch up with Carmella and Ellsworth who run into Paige. Paige makes Asuka vs Ellsworth II in a Lumberjack match next week. I can’t fucking wait lads.

THE CHAMP IS HERE… THIS WEEK

After an absence last week, we get the WWE champ on Smackdown Live this week. AJ Styles met Aiden English in competition. Before the match, we had some short promos from AJ and Rusev where AJ was met with dueling AJ Styles / Rusev Day chants. It will be interesting to see who the crowd go for in Pittburgh Sunday week. AJ sais that Rusev is bigger, stronger, and is a super athlete but is not phenomenal. Rusev had his own Rusev Day mic and said that he’s gonna evict AJ and move in to the house that AJ Styles built….. On Rusev Day. 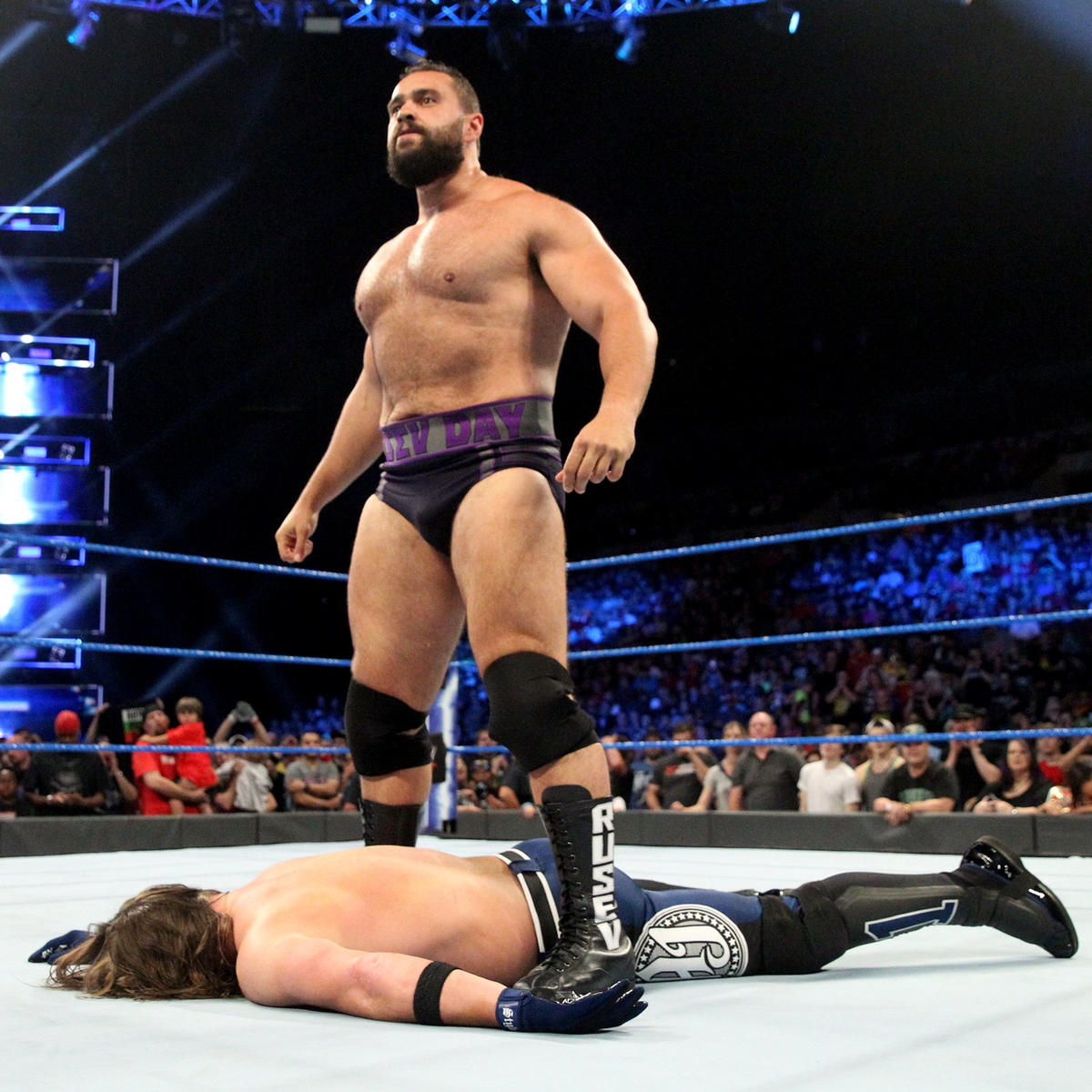 That House had Shoddy Workmanship…SHODDY.

For the start of the match, Rusev distracts AJ, by telling him “Oh, AJ, I forgot to tell you about… (Aiden attacks)… nevermind.” It was perfect. AJ won the match handily enough with a Calf Crusher. Rusev then attacked AJ after the match with a Machka Kick and an Accolade. 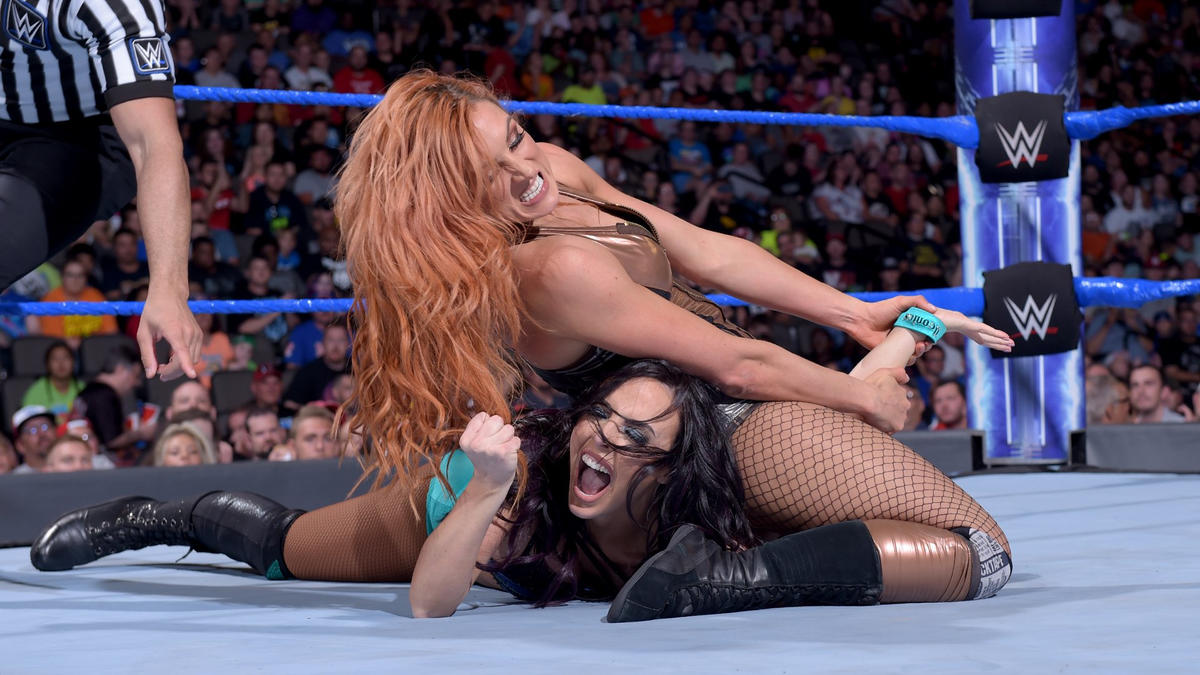 And I would have gotten away with it too, if it wasn’t for those pesky kids

Not a fantastic Smackdown this week but solid enough. They managed to cover a lot of the stories they have coming into Extreme Rules. It’s just all the dodgy finishes WWE have been doing lately across all of their shows that is annoying me. And while we only had one official dodgy finish this week on Smackdown, when you have pretty much every match end with a beatdown, it still feels that way. Still better than this week’s Raw though.

About the Author: Nicky Bowe - Junior Executive Vice President of that feeling you get when you are walking alone at night and you're sure there's someone there. Nicky loves Wrestling, Video Games, Batman, General Nerdy Stuff, Pina Coladas and getting caught in the rain. He likes DDP Yoga and having half a brain. Quite fond of making love at midnight, doesn't need to be in the dune of a cape. If he's the author you are looking for, write to him and escape.
Related Itemsaiden englishAJ Stylesasukabecky lynchBludgeon Brotherscarmelladaniel bryanIIconicsJames Ellsworthjeff hardykaneNew Daypeyton roycerecapreviewrusevsANitYShinsuke NakamuraSmackdownSmackdown LiveThe Mizusoswrestlingwwe
← Previous Story Going in Raw – WWE Raw – 2nd July 2018
Next Story → Going In Raw – WWE Raw – 9th July 2018