We opened Smackdown and people weren’t on ladders. It’s a Rusev Day miracle. All the Smackdown participants in the women’s Money in the Bank match were standing around in the ring with Paige in the middle. This is a Smackdown Women’s Money In The Bank Summit and after watching it, I’m still not sure what it was meant to be.  Paige hosted proceedings and doesn’t care who wins as long as one of them brings it back to “her house”. Then the competitors all started arguing and saying their piece to one up the other. Lana really didn’t have anything to say except it’s Lana Day. Naomi won the Wrestlemania Wwomen’s Battle Royal (don’t mention the pimping). But she only won because Charlotte wasn’t in the match. Charlotte hass won everything, Only thing she hasn’t done is win contract. Becky was the first female draft pick for Smackdown, first ever Smackdown champ. She’s sick of “was”, now she’s gonna have “I Am’s”. Becky is willing to go through anything and anyone even her best friend. “How’s your arm Charlotte?” Becky was great here. More Becky please. 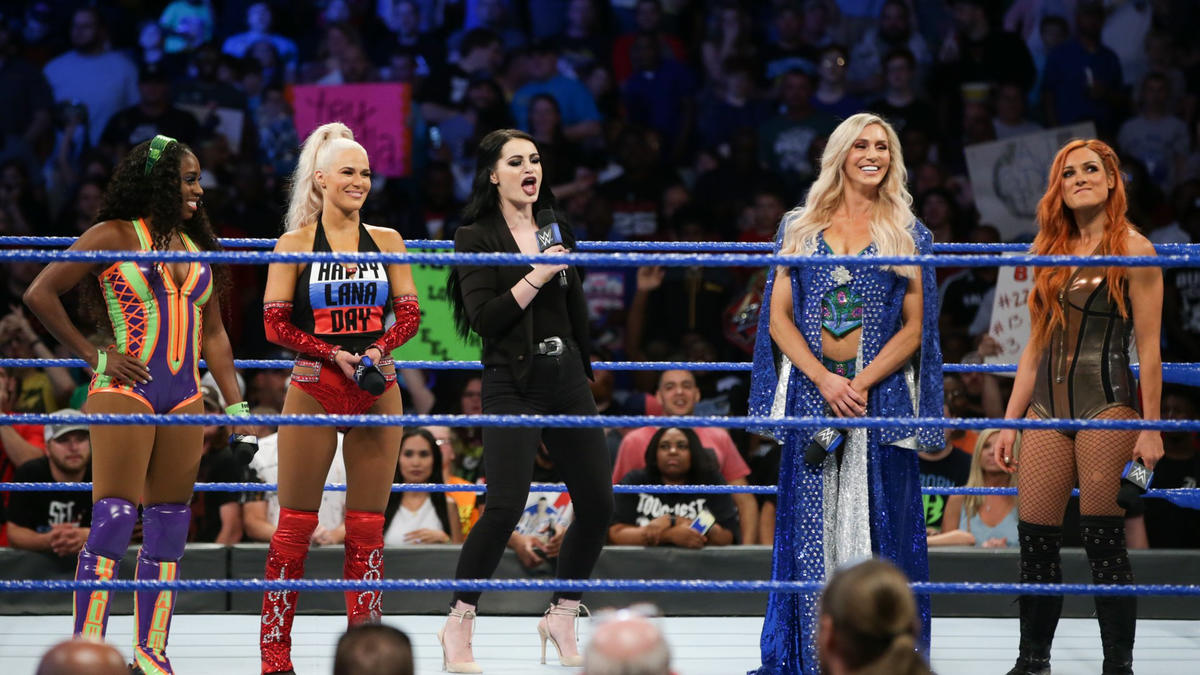 It’s not the first time Paige was in the middle of multiple women…..i assume…..allegedly

The IIconics the came out and said that it would be a miracle for any of them to take the briefcase back to Smackdown. Peyton does bad Irish impression. The crowd boo. Billie does Charlotte impression, which was a little better. They then do a combo dance impression of Naomi and Lana. They didn’t go for the racist thing in impersonating Naomi. I’m genuinely shocked. Mandy Rose and Sonya Deville came out next and Mandy said that the talent outside the ring are better than the talent in the ring. They all brawl.  Do I smell a Tag Team Match, playa?

In a shock twist, we don’t get an 8 woman tag team match out of this, we get a 10 women tag team match instead. Paige ran into Asuka in the back who wanted a match against Carmella as she couldn’t wait until MITB. Paige being sensible and not wanting to give away a PPV match on TV (what a novelty) instead put both of them into the tag match. This match was our main even of the evening. We had a Special Olympics ad during the entrances and an ad for the Rousey/Jax match during the match. The finish saw, a countered Moonsault and a broken up Asukalock before we got a completed Moonsault to the outide and a successful Asukalock with Asuka making the Smackdown Women’s champ Carmella tap out to get the win. 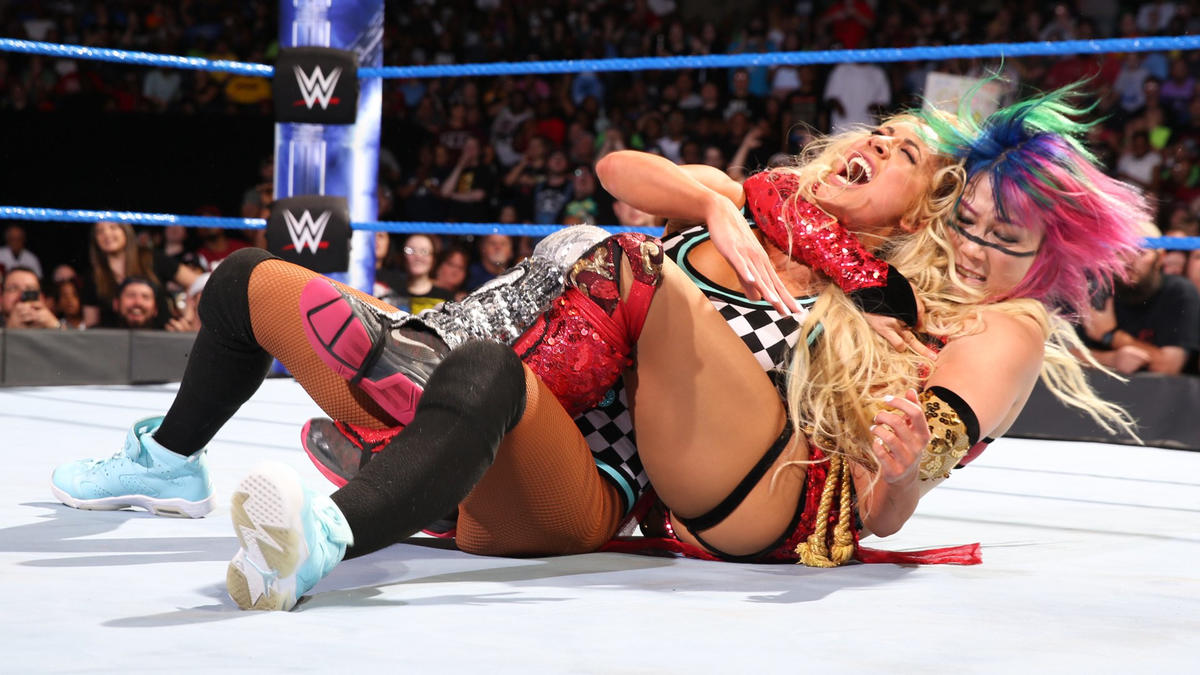 Mella is Money. But that money is Yen. And she doesn’t understand Exchange rates

After the match, the 4 women in the MITB match stood in the ring staring at each other, Asuka and the briefcase. Decent way to hype all the women’s stuff all together and they had the opening and closing segment of the show so were a nice sandwich for the rest of the show. No onto the fillings.

The big thing they were hyping for this show was 3 first time ever matches happening. None of the 3 really went all out or blew everything away but they were decent. 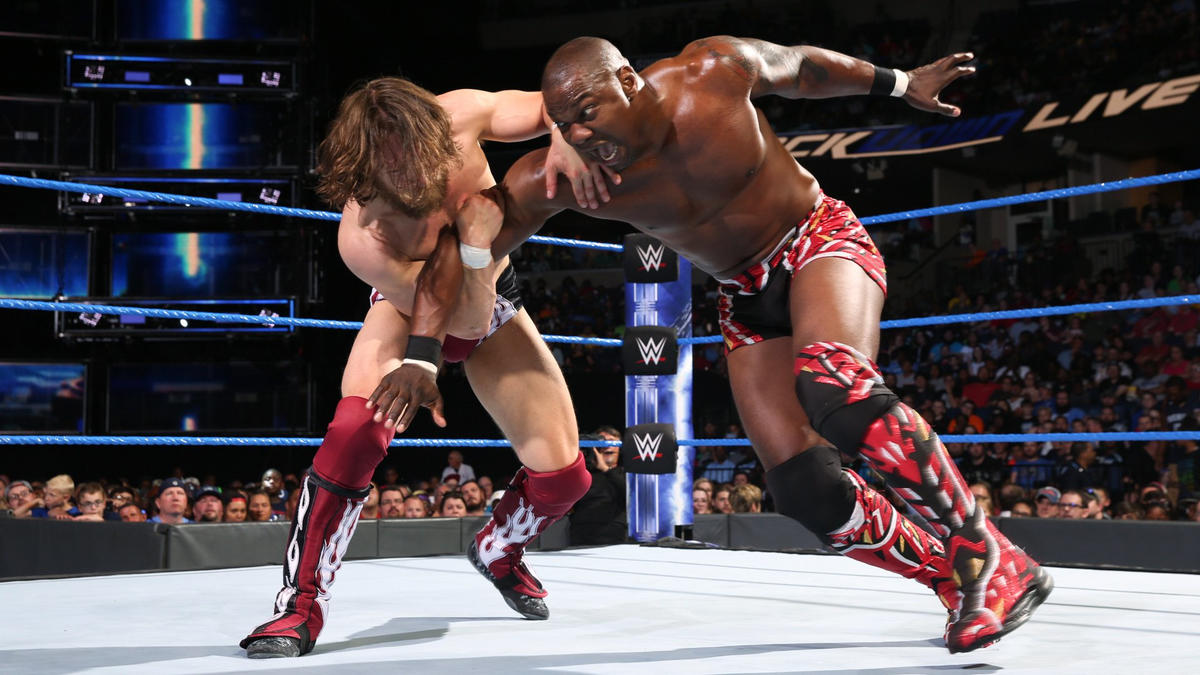 Not that arm. That’s my wanking arm.

First up we had Daniel Bryan vs Shelton Benjamin. To hype this up, they showed a recap of Daniel Bryan occupying Raw which was in the same building a few years ago. We also got a recap of 2 months ago when Shelton got a win over Randy Orton (they are grasping at straws now). They also showed footage of Daniel’s great Youtube promo on Cass from last week. The match itself was pretty good as you would expect from these two. Shelton worked Bryan’s knee for a lot of the match and it ended when Daniel made Shelton tap out to the Heel Hook.

Next up for the first time ever was Samoa Joe vs Rusev. This match took place on Rusev Day. Before the match, Paige ean into The Miz backstage who was in a ref shirt doing Karate stuff. Miz said that he was preparing for awards season as he is in a new movie called “Ruff Ruff Ref”, a film about a dog who referees the main event of Wrestemania. Since he is a method actor, he asks to be special guest ref for the Joe/Rusev match since he is a method actor. Paige sees through his bullshit and uses the Miz’s own line of “hand goes up, mouth goes shut” against him. But then makes the match anyway. Because reasons.

Another decent match here. English rapped Rusev to the ring like Hip Hop artist Jon Meyer. We came back from a break just to go to an in box ad for MITB. The finish came when Rusev was locked in a submission, but English distracted Miz. Joe then ended up accidentally running into Miz, and took out Aiden too. After this, Miz refused to count Joe’s pin. Rusev hit the Machka kick and picked up the win. 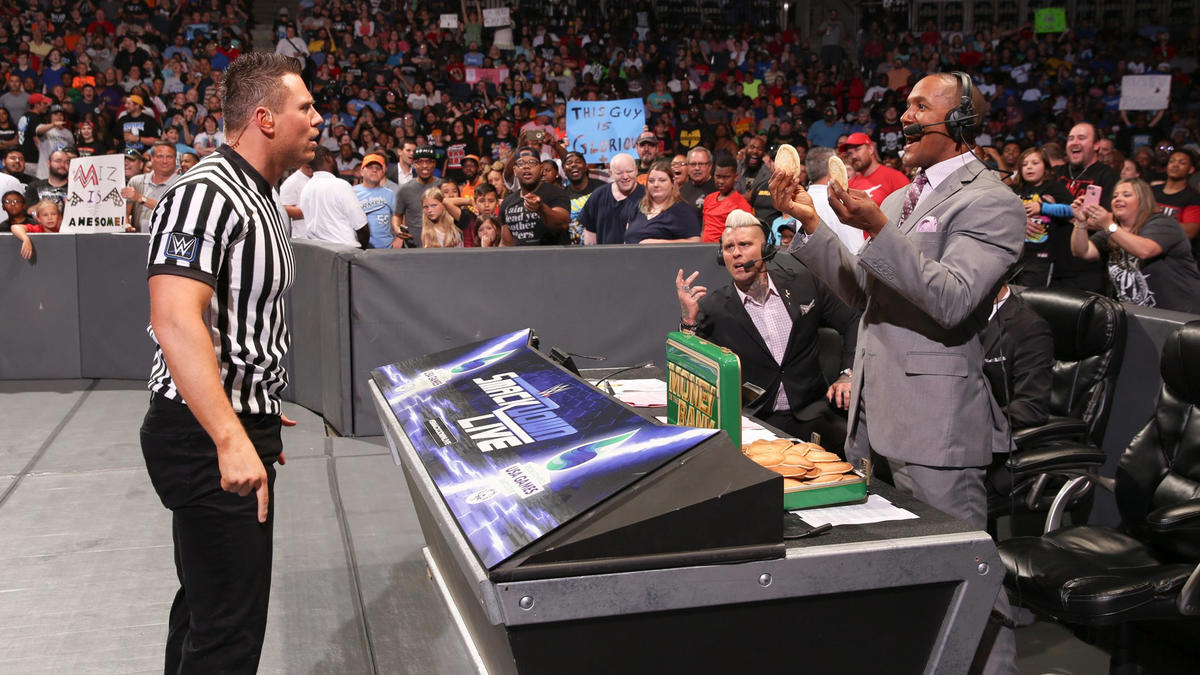 After the match, English handed Rusev a ladder. Rusev hit Joe with it and then set it up to climb. Before Rusev was able to ascend, Miz took him out with a Skull Crushing Finale, climbed the ladder himself and took the briefcase. He left the briefcase down on the announce table and opened it up. It was filled with pancakes. Miz does a Captain Kirk in Wrath of Khan style NEW DAYYYYYYYY!!!!!. Cut to the New Day backstage laughing at Miz. Kofi and Woods are sharing one tshirt.

In the final first time match this week, Jeff came up against Shinsuke Nakamura. There is going to be a 24 Special on the Network for the Hardys after MITB this Sunday and it looks really good. This match is apparently over a Twitter conversation that they don’t bother showing, just mention casually halfway through the match. They usually love throwing up Twitter conversations on screen so I’m not sure why they didn’t do it here. Maybe Corey just wanted to avoid mentioning Twitter in the hope that everyone would forget what happened at the weekend. 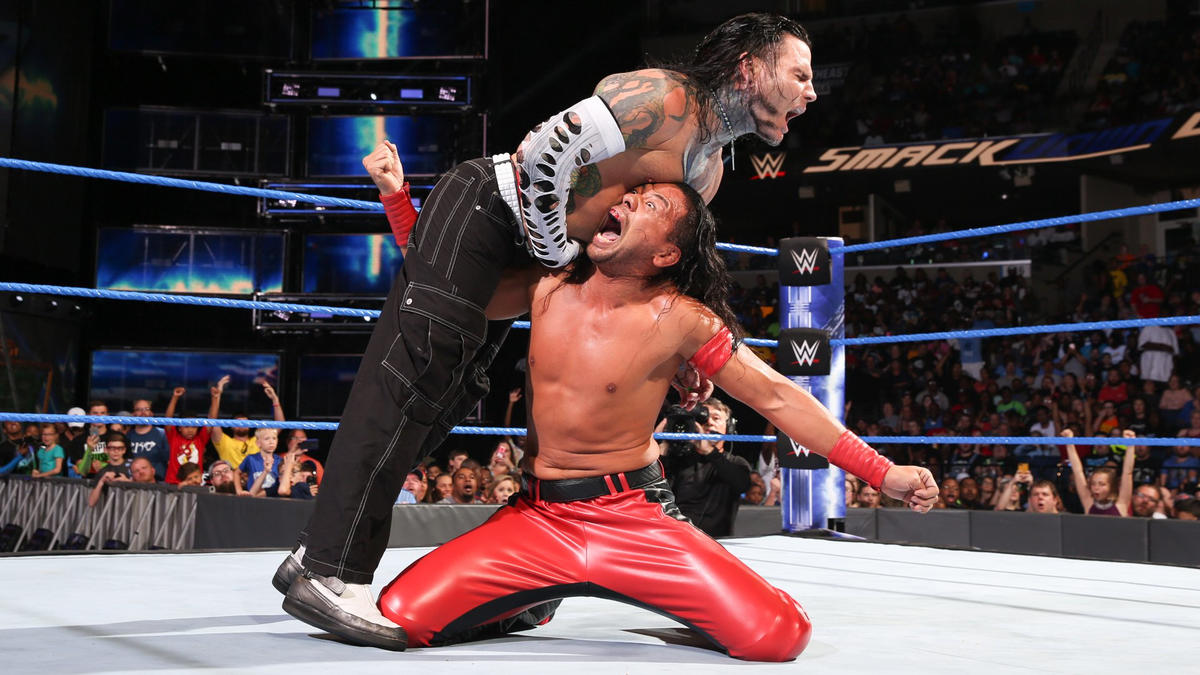 The more penises he pummels, the more powerful he becomes

Match ended when Jeff hit a Twist of Fate and then a Swanton but wasn’t able to make the cover quickly so Nakamura managed to get his foot on the ropes. Shinsuke followed this rope break up with a swift Forearm directly into the penial shoft of Jeff Hardy who got a DQ win. The Tallywacker Terminator then hit a Kinshasa before counting to 10 to show that he can still keep people down for a count of 10. 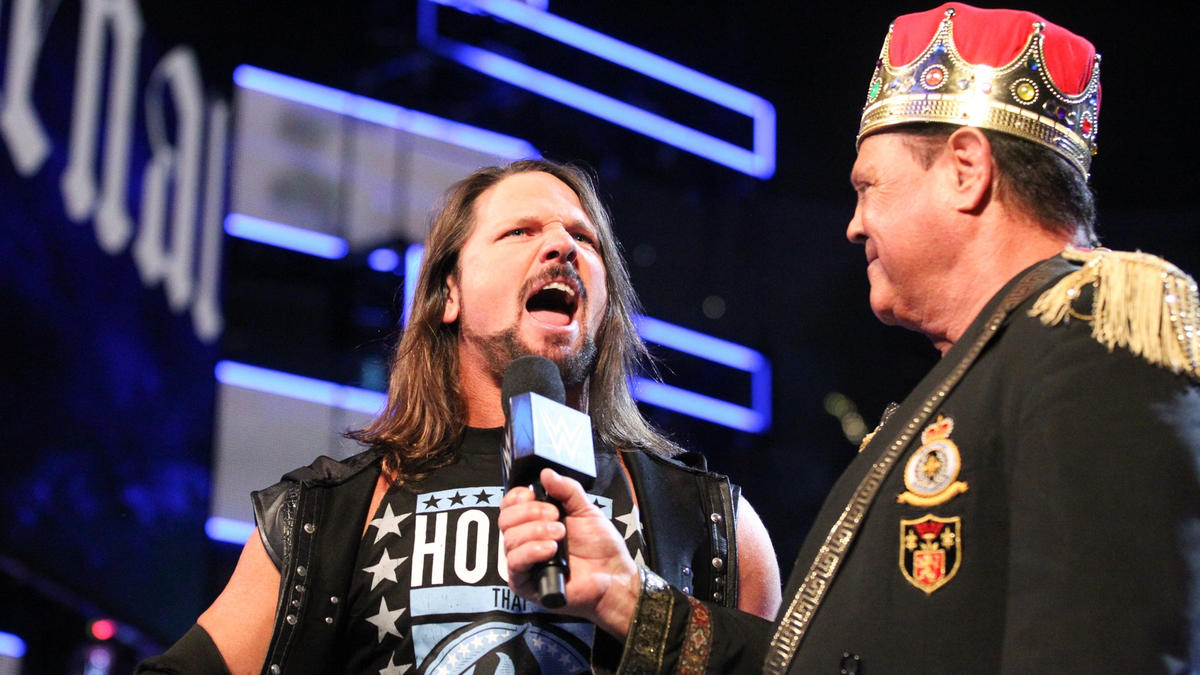 Not a bad Smackdown. The last couple of weeks were probably better overall. As this is a go home show and WWE seem to now just use these as giant ads for the PPV, this was no different. A lot of recaps of all the matches at the weekend and even ads mid match about other matches. Oh and did you know that new subscribers get a free month of the WWE Network. Completely brand new information to me.

Despite all this, I am really looking forward to the Smackdown side of Money in the Bank. The 2 MITB matches themselves will be great, they always are. Asuka and Carmella could be fun. Carmella being the overwhelmed heel to a dominant Asuka has to be the way to go there. BB vs GB will be a hardhitting contest too. But it all really lies on the WWE Title match. They really have to let this be the match the one we wanted at Wrestlemania. I’m sure they aren’t blind to the fact that New Japan just put on one of if not the best match of all time last weekend and they need to have some sort of a response. While I’m not expecting an over an hour match, AJ Styles and Shinsuke Nakamura can surely be let put on a possible Match of the Year contender here.  Just cut time from Reigns/Jinder and Sami/Lashley. Please. Really, nobody cares about those matches. Maybe just forget to put them on the show?

Click here to subscribe to the 2Bit Sports YouTube Channel
Here you will find clips from our weekly Wrestling Podcast, the one we mentioned above. If you want to listen to the full episode, you check out our most recent one here. There is a new one every Friday Night.

About the Author: Nicky Bowe - Junior Executive Vice President of that feeling you get when you are walking alone at night and you're sure there's someone there. Nicky loves Wrestling, Video Games, Batman, General Nerdy Stuff, Pina Coladas and getting caught in the rain. He likes DDP Yoga and having half a brain. Quite fond of making love at midnight, doesn't need to be in the dune of a cape. If he's the author you are looking for, write to him and escape.
Related Items1AJ Stylesasukabecky lynchcarmellacharlottedaniel bryanIIconicsjeff hardylanamandy rosenaomiNew DayrecapreviewrusevSamoa Joeshelton benjaminShinsuke NakamuraSmackdownSmackdown Livesonya devilleThe Mizwrestlingwwe
← Previous Story Going in Raw – WWE Raw – 11th June 2018
Next Story → Ronda Rousey Is The Most Interesting Thing About The WWE Main Roster