After a couple of weeks of pretty good Smackdowns paired with terrible Raws, can the trend continue? Raw wasn’t great this week so here’s hoping for a good Smackdown.

We opened the show with Carmella this week. She asked the crowd to shower her with the praise she deserves. After they did not oblige, she said that tonight was not about her, it was about Asuka. Everyone deserves to know the truth, Asuka is not who we think she is. Oh god, this is the Sami/Lashley thing all over again. lease god no. She played a video package of the Asuka we know where Asuka wins all the things.  She then played a video of Asuka losing at Mania and on Smackdown and being beaten up by Mandy Rose (she won that match btw so bad example. Carmella claims this is the “real” Asuka. The loss shattered her. Oh good, at least she doesn’t have brothers that we need to meet. 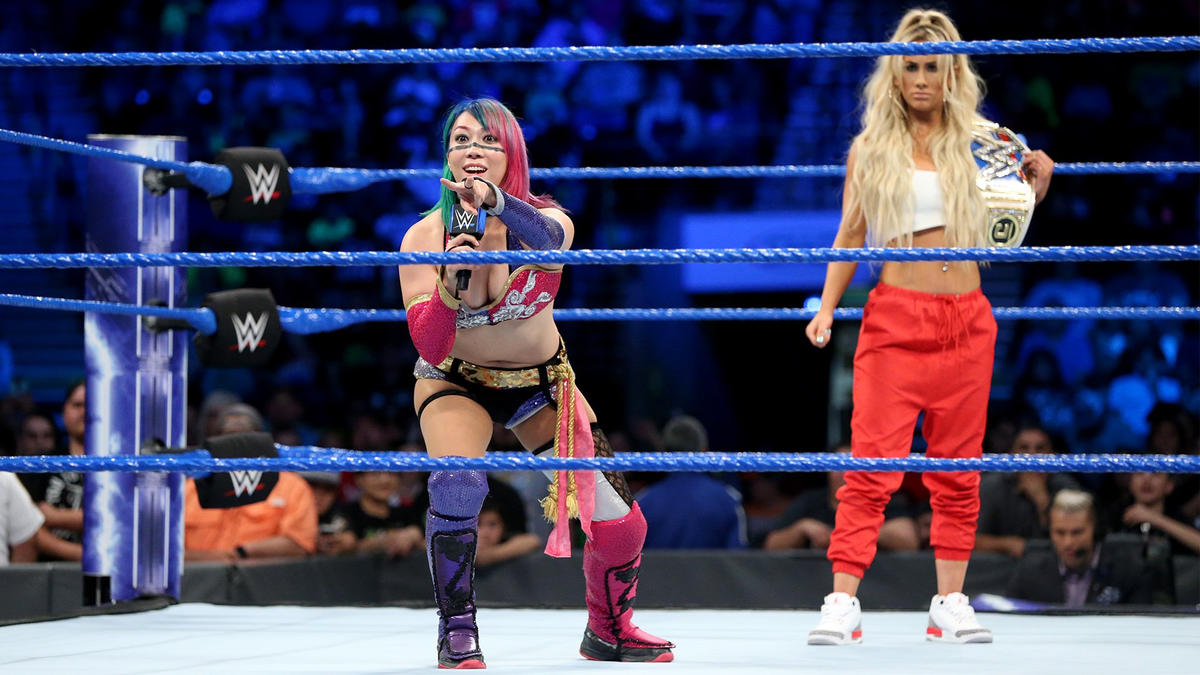 Asuka learns how to do half of the Shocker

Asuka came down and faced off against Carmella. Sonya Deville and Mandy Rose then come out for some reason. Mandy agrees that Asuka is a shadow of her former self (yet again, she beat you last week Mandy). Mandy said that she was a second away from winning last week so she knows she can win tonight.  Ya, that’s not how 2 counts work. Sonya said that it’s her turn and she wants a one on one match with Asuka. Carmella said that the old Asuka would have taken them both on but since she’s not that Asuka anymore, she asks Asuka to make a choice on who she wants to face or does she want to get an Uber home. 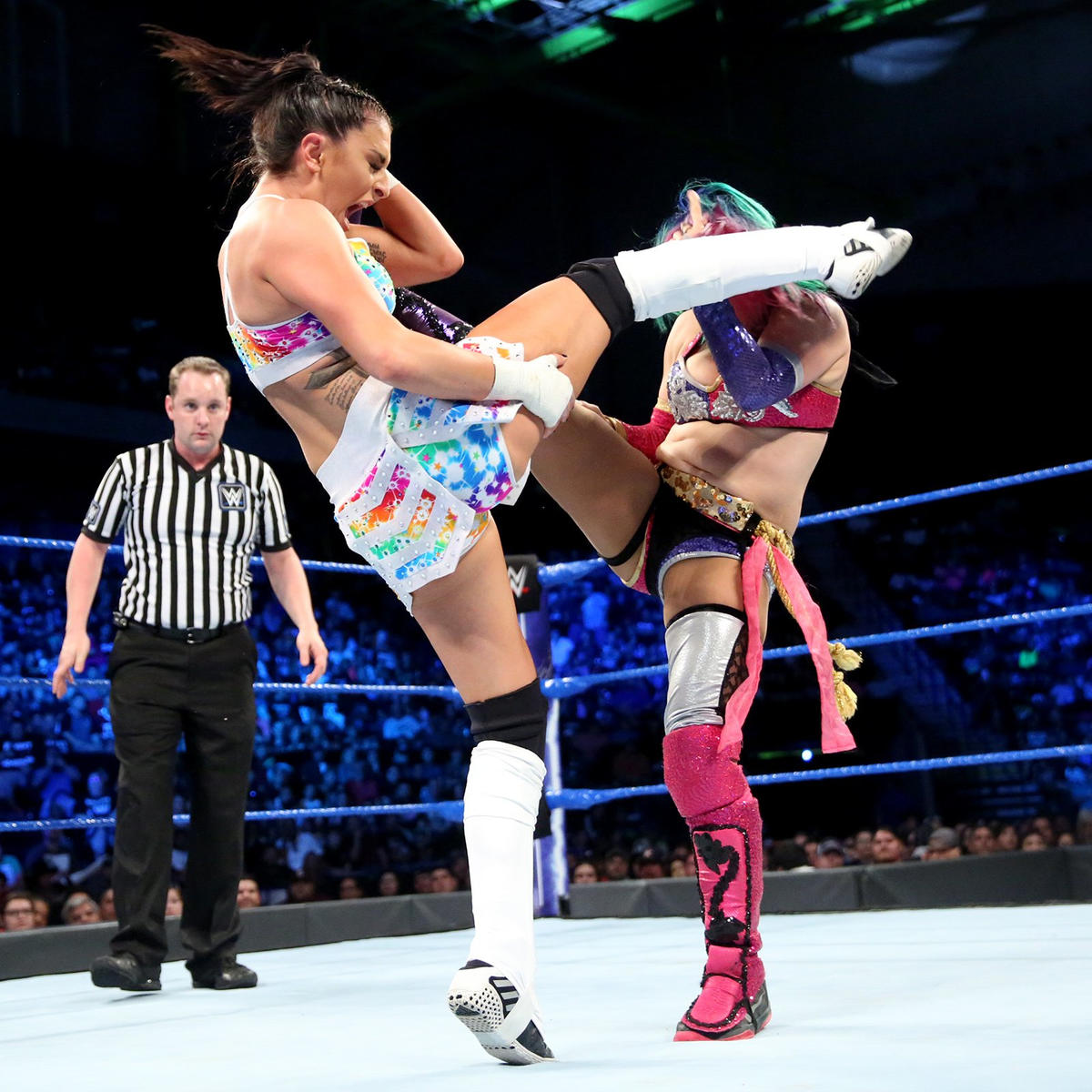 Line Dancing has evolved a lot over time

Smackdown Live General Manager Paige TM came out next, claimed that no-one speaks for her because she makes the matches. She then gives Asuka the exact same choice Carmella was giving her (minus the Uber part, company can’t spring for that). Asuka opts for a Handicap match against both of them and it starts after the break. Carmella is on commentary. Did you know that she beat Charlotte twice? The heels dominate Asuka for a lot of the match. Carmella does some distractions to help with this. Asuka ends up picking up the win by tapping Deville out with the Asukalock. Afterwards, Carmella gets in the ring. Mandy attacks Asuka but Asuka fights her off. While doing this, Carmella hits Asuka with the title and then a kick to the face and stands tall.

Our main event of the evening was a 6 man tag team match between The New Day and the team of The Miz, Rusev & Samoa Joe. Before the match itself, we had a couple of backstage promos throughout the show with some of the participants.

First up Miz was still doing his Karate Kid impression in the back (Miz Jitzu). He almost hit Mr Bootyworth. The New Day comes up and apologise to Miz for dicking him around the last couple of weeks. They say that they are taking this seriously now, and they are going to get Miz to help them reveal their member to the WWE universe (giggedy), They have their names in Mr Bootyworth’s hat and Miz has to pick one out. There can be no peeking though so Miz has to pull down his bandana over his eyes. As he does this, they switch hats and Miz ends up putting his hand in pancake batter. Big E breaks down completely. That man has the best facial expressions of anyone. Miz needless to say, isn’t best pleased and after wagging his finger at ya boys, he wipes his hands in Mr Bootyworth.

Next up, we had the Dashabot 5008 in the back with Samoa Joe. Joe asks Dasha what she sees when she looks at him. She doesn’t actually answer, must not be in her programming. But he goes on to say that she sees that he’s a rapid dog, and all that sort of stuff.  But what he actually is, is a man who keeps his promise. He promised he would make Daniel Bryan go to sleep and that’s exactly what happened. What you see is what you get and soon, everyone will get it (#phrasing). 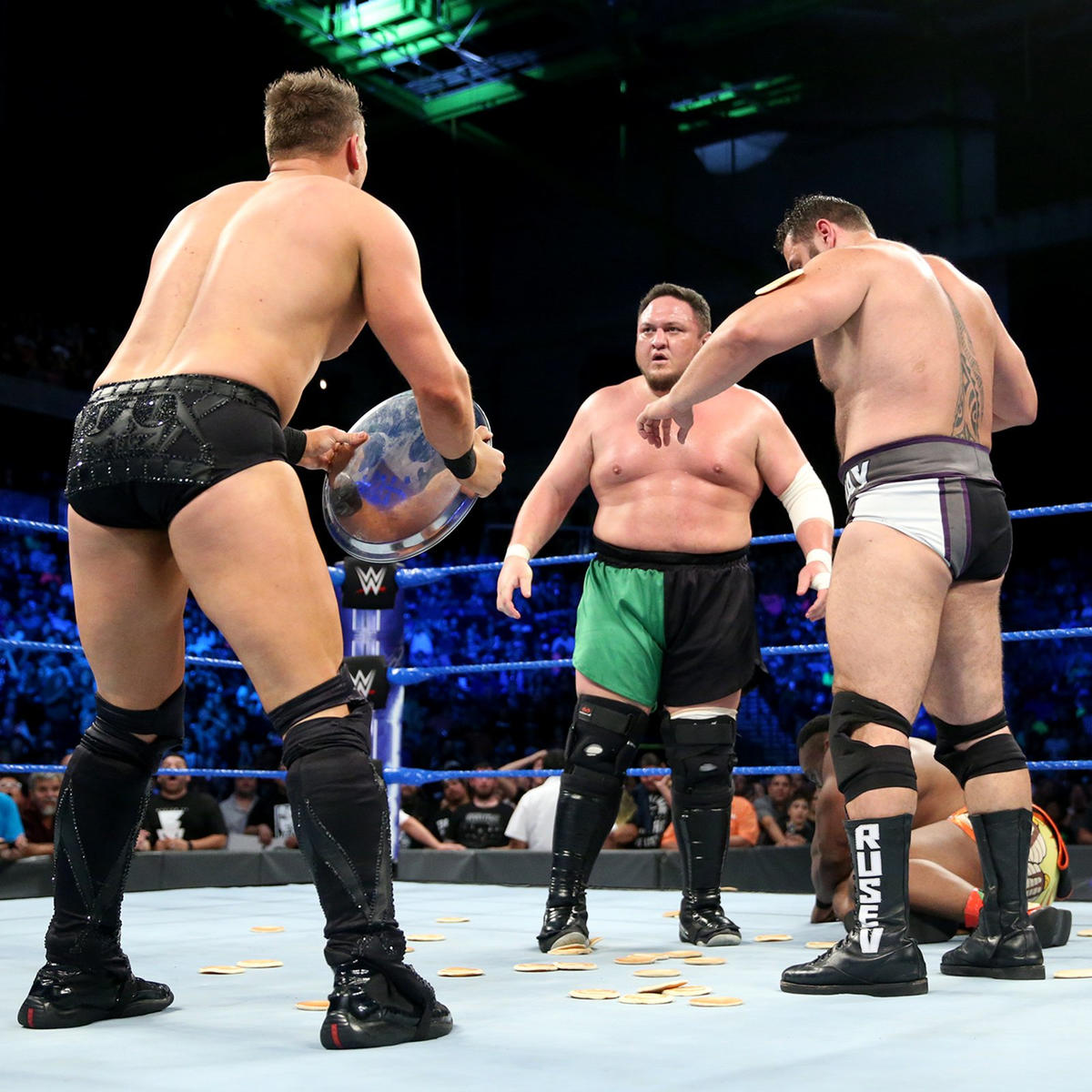 Joe is really more of a Waffle type of guy

As for the match, it was a fun match. The end sequence went as follows: The New Day dove on everyone individually with Kofi managing to bend space and time with his dive. Joe then puts Woods in the Coquita Clutch and Kofi gets Machka Kicked in midair by Rusev. This leaves Big E in the ring with his 3 opponents. The Miz gets the other 2 to hold E up while he goes to get a tray of pancakes. After a little distraction, Miz accidentally throws the pancakes on his teammates. He then gets a Machka Kick and Senton Bomb before being left on his own. One Midnight Hour later and Big E pins Miz for the win. And we still don’t know who will be representing The New Day in the Money In The Bank match.

AJ Styles and Shinsuke Nakamura had a contract signing for their Last Man Standing Match at MITB. But in a shock twist, it didn’t happen in the ring. It happened backstage. Smackdown Live General Manager Paige TM was the host/mediator of the segment. They also had Dean Malenko and Adam Pierce at the table for some reason. Paige assures us there will be a winner at Money In The Bank (but what if neither man can get up for a count of 10?. Then it’s a draw. And there’s no winner). 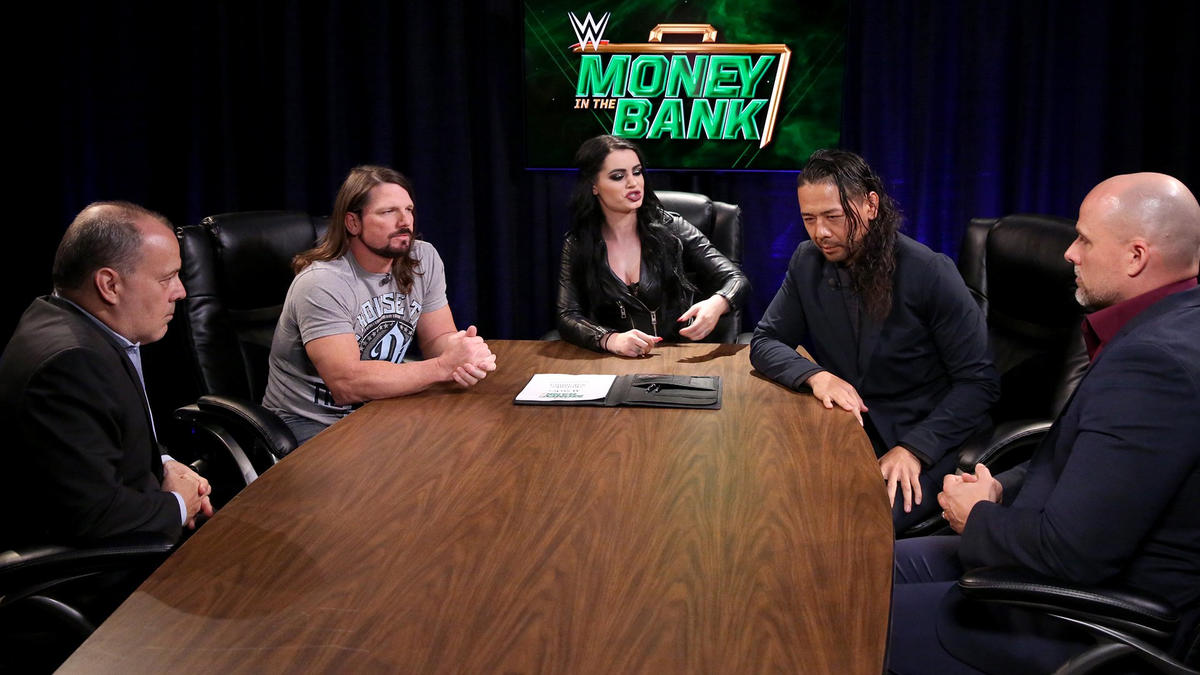 AJ says that straight up, Shinsuke can’t beat him. That’s why he has resorted to low blows, etc. AJ then signs the contract. Shinsuke says his pen is out of ink, asks to borrow AJ’s pen instead. AJ hands it over and Nakamura then says that this pen is broken and throws it away. Styles gets hot at this and says he’s tired of these games, gets held back by the Malenko and Pierce (I guess that’s why they were there). AJ slaps Shinsuke and gets dragged away by the lads. Shinsuke takes a pen out of his pocket and signs the contract saying Last Man Standing. I liked this backstage contract signing. It was different to the norm. Different is (usually) good.

Renee Young interviewed Big Cass on the stage. The only reason I can think of why they were on the stage is so they can get the camera angle from below Cass to make him seem taller. They mention that it’s been confirmed that Daniel Bryan will take on Big Cass at MITB. Cass has a little story for us. He was backstage at Mania 30, walking behind D Bry as he was heading back after his title win. And all Cass could think was “seriously?”. Cass said that Bryan’s win then was a fluke just like his win at Backlash. He says a good big man will always beat a good little man. Shows footage of D Bry passing out last week and Cass picking up the pieces. 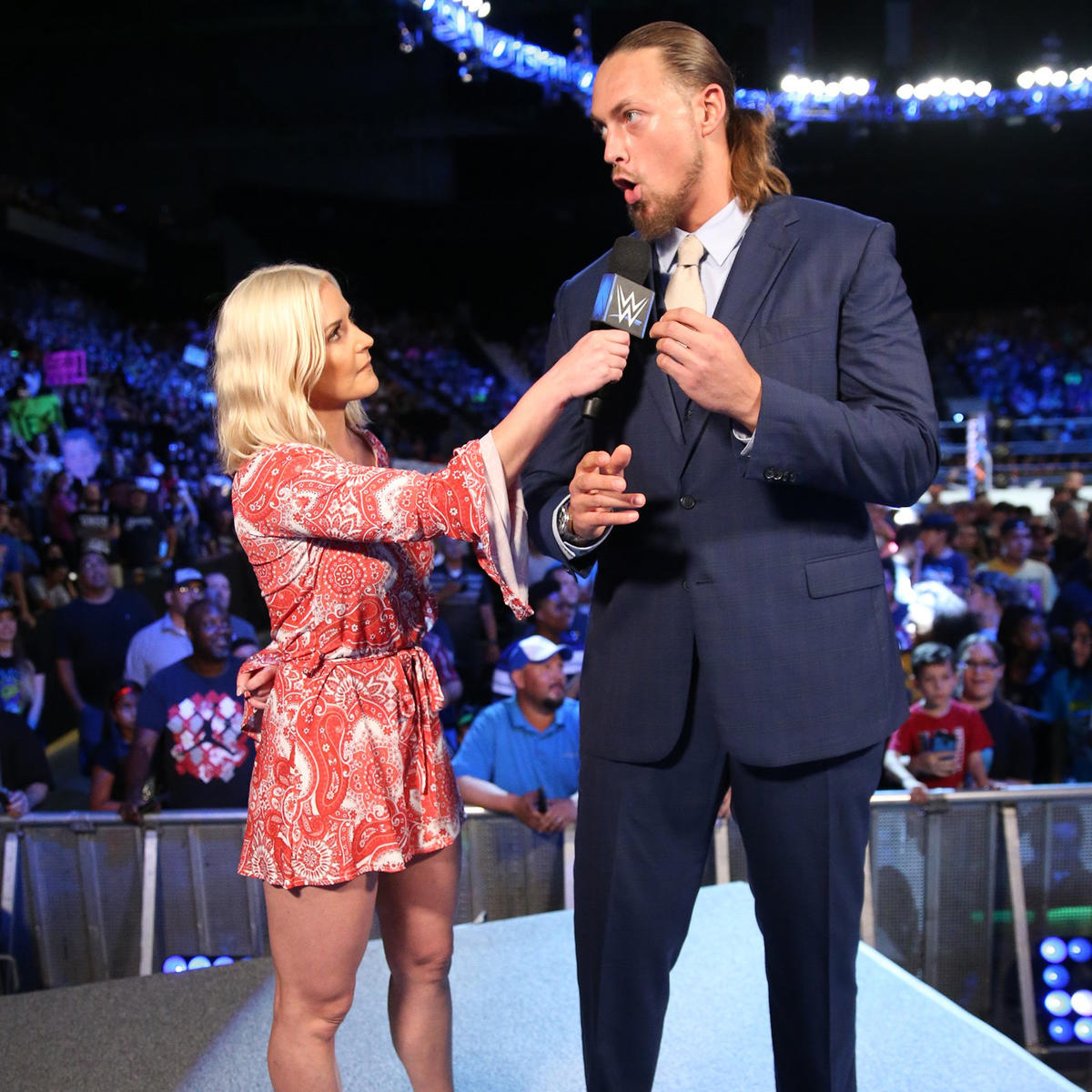 He’s 7 foot tall you know. I wonder if you can teach that?

Cass said he’s gonna rip off Daniel’s skinny arms and beat him over the head with him. He’s gonna snap his skinny legs like twigs. A lot of mentions of skinny. D Bry is far from skinny. He might be a little on the short side but far from skinny. He says that Daniel will have to come to the realisation that a small man like him will never survive in this big man’s world. Despite the fact that Bryan has been world champion multiple times along with tag, US and IC title reigns. Cass has won………… 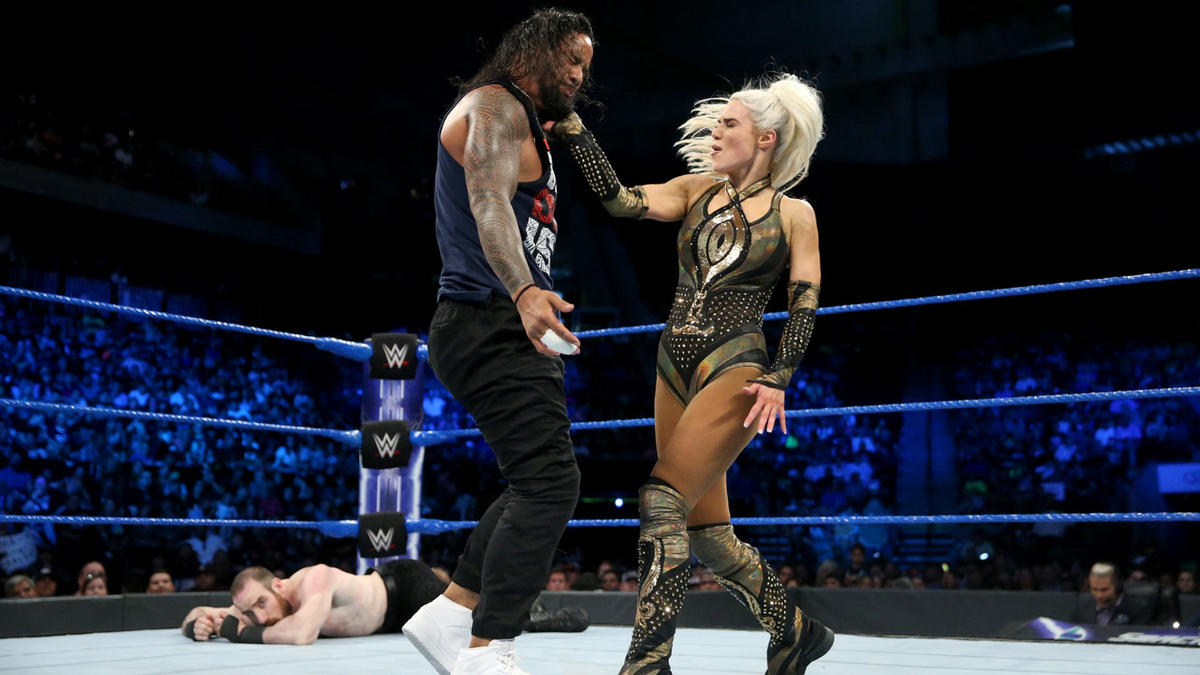 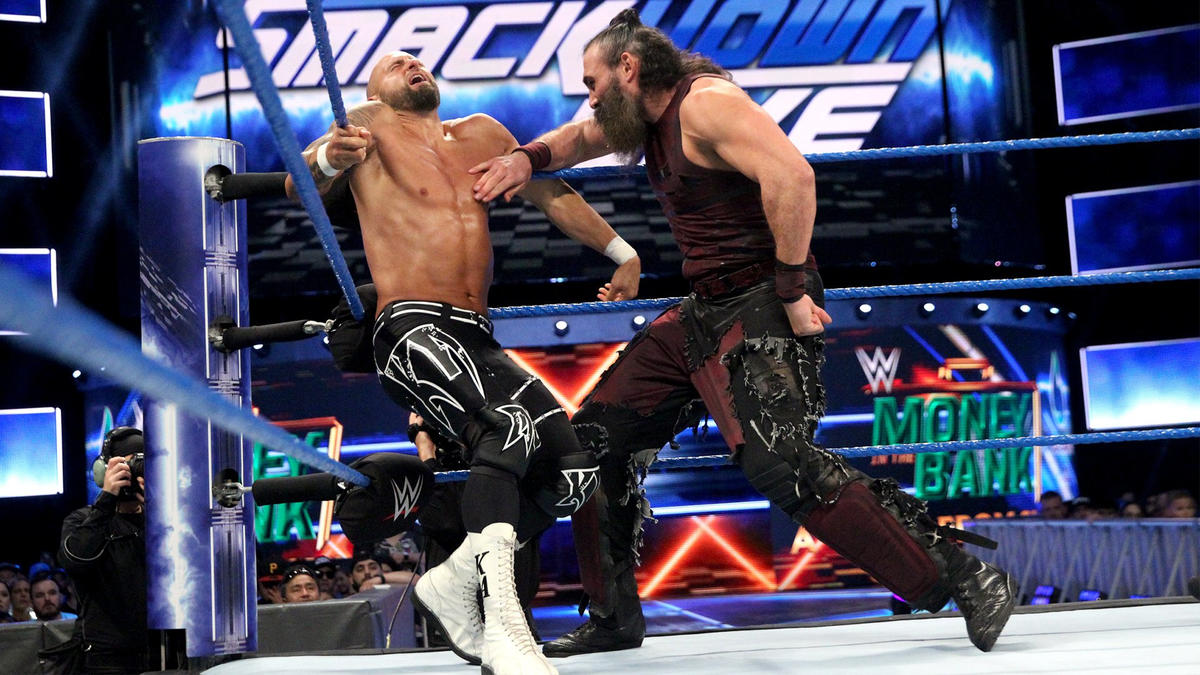 A Bludgeoning of the Nipple 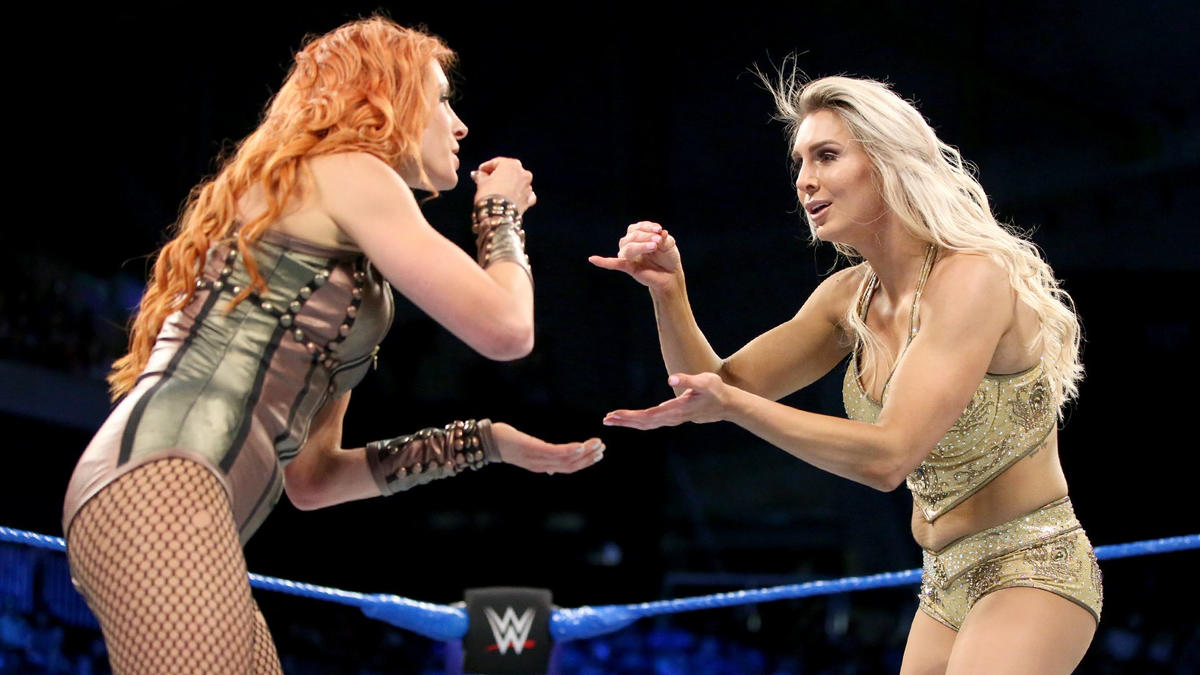 Charlotte learns the final part of the Shocker

It was a pretty decent Smackdown. Not as good as the last couple of weeks but definitely not as bad as Raw. Now that most of the matches are set for Money In The Bank, it seems we are on holdover until then so I’m not expecting too much for next week but give me a couple of decent matches and I’ll be happy anyway.

Click here to subscribe to the 2Bit Sports YouTube Channel
Here you will find clips from our weekly Wrestling Podcast, the one we mentioned above. If you want to listen to the full episode, you check out our most recent one here. There is a new one every Friday/Saturday.

About the Author: Nicky Bowe - Junior Executive Vice President of that feeling you get when you are walking alone at night and you're sure there's someone there. Nicky loves Wrestling, Video Games, Batman, General Nerdy Stuff, Pina Coladas and getting caught in the rain. He likes DDP Yoga and having half a brain. Quite fond of making love at midnight, doesn't need to be in the dune of a cape. If he's the author you are looking for, write to him and escape.
Related Items1aiden englishAJ Stylesasukabecky lynchbig cassBludgeon Brotherscarmellacharlottejimmy usokarl andersonlanamandy rosenaomiNew DayrecapreviewrusevSamoa JoeShinsuke NakamuraSmackdownSmackdown Livesonya devilleThe Mizusoswrestlingwwe
← Previous Story Going in Raw – WWE Raw – 4th June 2018
Next Story → Going in Raw – WWE Raw – 11th June 2018