The highly anticipated NXT Takeover New Orleans happened last night. It was a great show and our own Steve Fitzpatrick was at the show too. We went live on Youtube after the show with Fitz where we got all the stories and opinions of the live crowd and ran through the show. You can check that out below. It’s also available on all our usual Alleged Wrestling Podcast feeds. For those that don’t like listening to stuff, I’ve also written out a short recap below.

The Podcast motto is “Fuck The Preshow” but I always watch them personally. On this one, we had Charly Caruso joined by Sam Roberts and former NFL Punter Pat McAfee. McAfee was just off a Twitter and Live event feud with Adam Cole (BAYBAY) and they furthered that a bit with a interview during the show. Pat did call the NXT Women’s Title a strap however so he’s probably not gonna be invited back. With Fitz being live at the show, we also found out that the preshow for Takeover is actually recorded in advance and they air it while the matches for next week’s NXT are being taped. You learn something new everyday

We start out with a live performance of “It Follows” from Cane Hill with a mini preview of the show inter sliced into it. I mentioned in my Top 10 Wrestlemania Video Packages article how I loved when they did this at Wrestlemania 18 and I loved it here too. http://2bitsports.com/2018/04/06/top-10-wrestlemania-video-packages-time/

Adam Cole vs. EC3 vs. Killian Dain vs. Lars Sullivan vs. Ricochet vs. Velveteen Dream

This was a cracking match. Fantastic way to introduce EC3 and Ricochet to NXT. The first move Ricochet ever did on WWE TV was a springboard shooting star press to the outside. Start as you mean to go on, I suppose. All the men in the match put on a fantastic display here with dives from everyone. Highlights include Dream doing an elbow drop from the top of a ladder, Ricochet getting tipped off a ladder and moonsaulting to the outside, Dream doing a cartwheeling Death Valley Driver to Ricochet onto a suspended ladder, and an Urinagi from Lars to EC3 through Dream through a ladder. After all the mayhem, Adam Cole (BAYBAY) came out on top and walked away as the first ever NXT North American Champion. 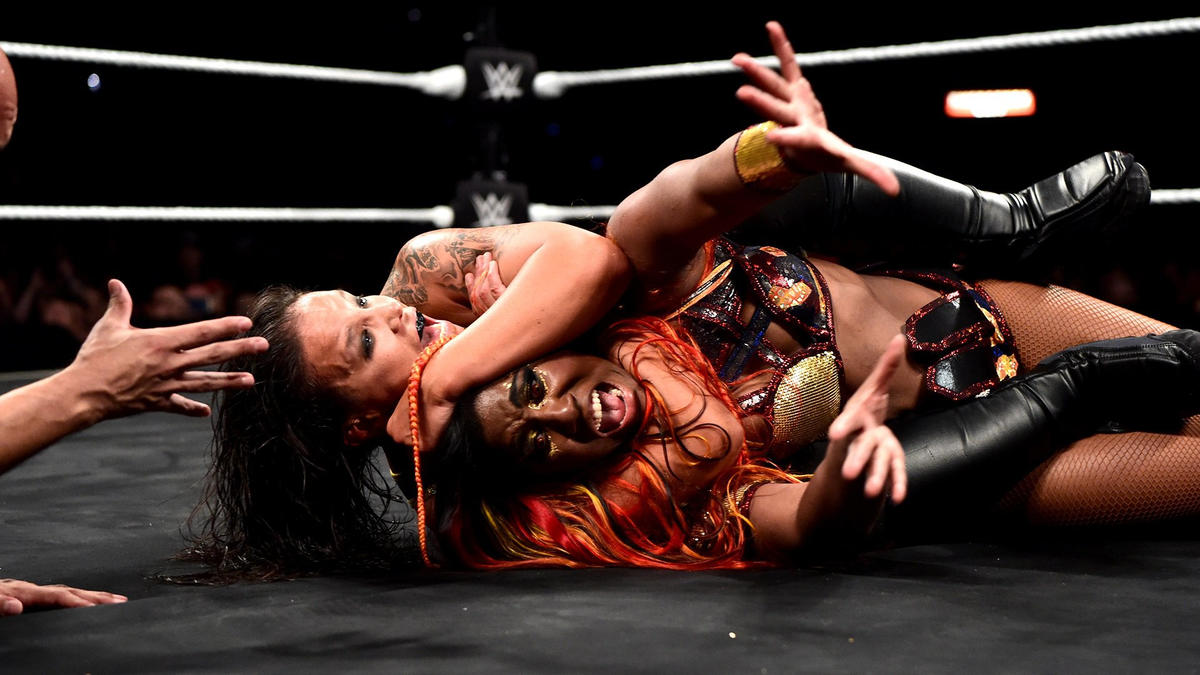 Ember got played to the ring by Cane Hill playing her entrance music with Halestorm singer Lzzy Hale doing the vocals. Ronda Rousey and Jessamyn Duke were in the crowd cheering on Baszler. It took a while for the match to get going, likely because the crowd were so burnt out after the match before. It picked up when Ember avoided the stomp to the elbow and his Shayna with one of her own. Shayna then had to pop her shoulder back in by ramming it repeatedly into the ring post which was nice. The finish came when Shayna countered the Eclipse into a Kirifuda Clutch and Ember passed out. So we have a NEW NXT Women’s champion in Shayna Baszler. Assuming we will see Ember make an appearance on Monday or Tuesday.

The Undisputed Era vs. The Authors of Pain vs. Roderick Strong and Pete Dunne 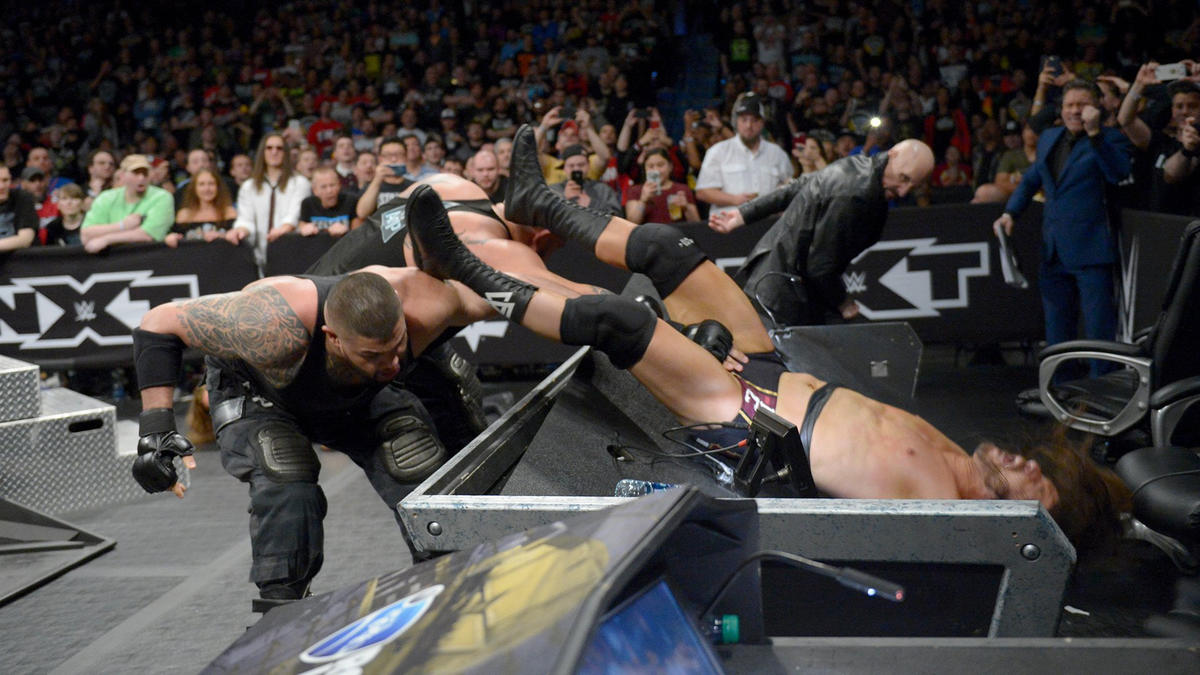 Adam Cole made his 2nd appearance of the night here as Bobby Fish is injured so he needed to represent The Undisputed Era and defend the tag team titles. He was powerbombed through the Spanish announce table early in the match and we didn’t see him again after that. For the finish of the match, Dunne hit a Bitter End on O’Reilly and went for the pin by Dunne’s own partner Strong broke it up. Roddy hit the End of Heartache on Dunne and placed O’Reilly on top of Dunne for the win. Strong then proceeded to put on an Undisputed Era armband and is now an official member. The ROH invasion of NXT continues.

Another damn good match on this NXT card. Vega was a massive part of this match interfering on multiple occasions doing hurricanranas on Black whenever the ref’s back was turned. After Black took quite a beating and kicked out of everything Almas threw at him including the Hammerlock DDT, Vega went for a crossbody from the top rope, Black avoided it and Almas caught her. While Almas was holding Vega, Black hit him with the Black mass and got the 1,2,3. Aleister Black is the NEW NXT Champion and also the 13th ever champ. Which is a nice touch. 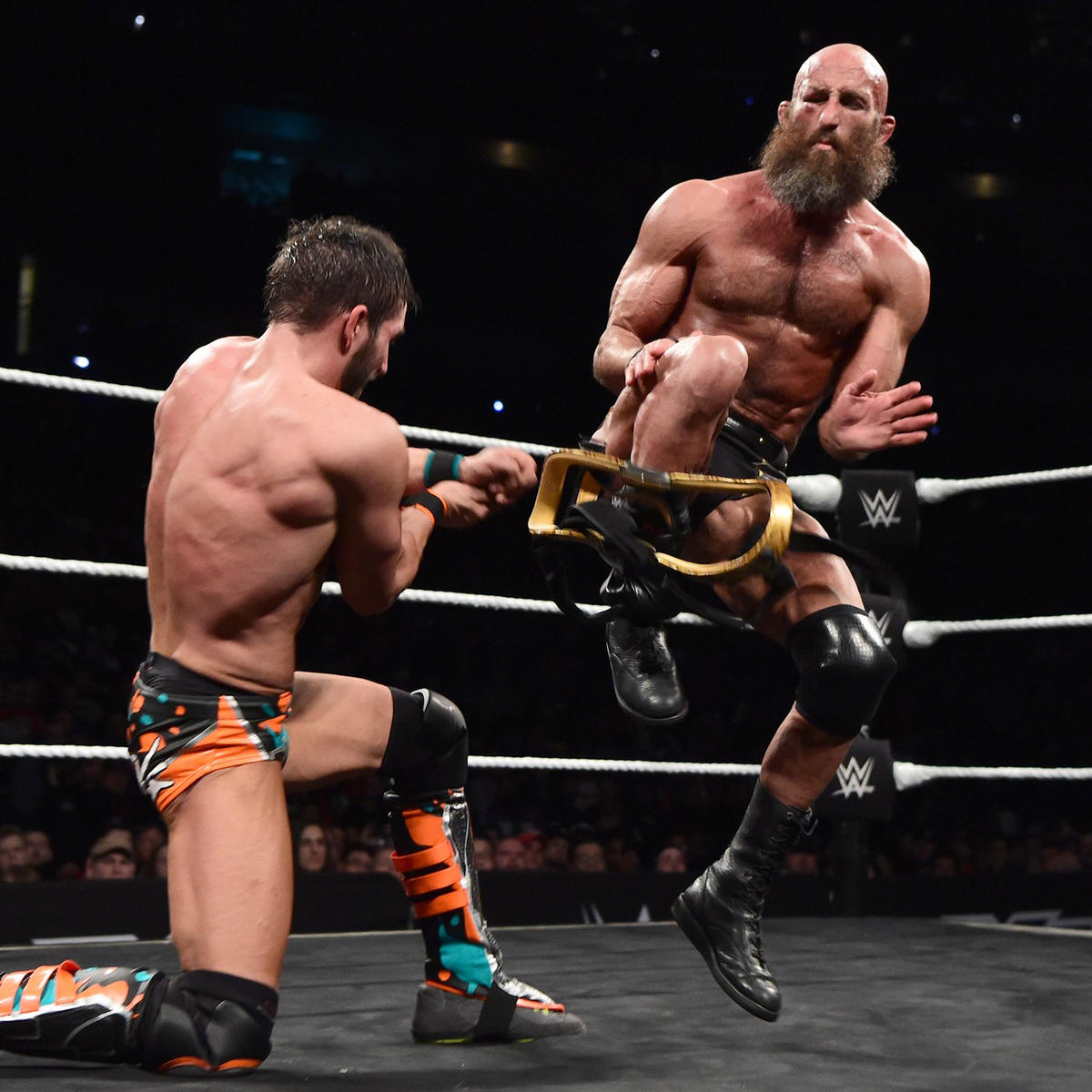 The main event of the evening and deservedly so. This match has been building for nearly a year and it definitely delivered. Ciampa came out with no music and the crowd greeted him with a chorus of boos and “Fuck you Ciampa” chants. They destroyed each other in the match which had no rules except pinfall or submission wins. We had so many near falls. There was a crutch robbed from a guy in the crowd used. Gargano hit a lot of superkicks and Slingshot DDTs. Ciampa hit a couple of Project Ciampas, one from the 2nd rope.

The finish came when Ciampa took off his knee brace and knee pad which the intention of taking out Gargano at the expense of his own knee. Gargano picked up the knee brace and cracked Ciampa across the knee with it. Gargano was about to take out Ciampa with the crutch but stopped short at the cowering Ciampa who had a swollen eye at this point. Johnny put down the crutch and was about to kneel down beside his long time friend before Ciampa attacked with the knee brace. Gargano countered this into a Gargano Escape and then readjusted into an STF in which he grabbed the brace and draped it across Ciampa’s face. This was too much for Ciampa and he tapped out. Johnny Wrestling has his job back and the crowd goes home happy.

Fancy testing your wrestling knowledge, and proving you know more than your friends? Of course you do! Then you should check out our weekly wrestling quiz, posted every Friday. The latest quiz is the first of our Wrestlemania quizzes, and you can check it out here.

Click here to subscribe to the 2Bit Sports YouTube Channel
Here you will find clips from our weekly Wrestling Podcast, the one we mentioned above. If you want to listen to the full episode, you check out our most recent one, our Wrestlemania weekend preview here. There is a new one every Saturday.

About the Author: Nicky Bowe - Junior Executive Vice President of that feeling you get when you are walking alone at night and you're sure there's someone there. Nicky loves Wrestling, Video Games, Batman, General Nerdy Stuff, Pina Coladas and getting caught in the rain. He likes DDP Yoga and having half a brain. Quite fond of making love at midnight, doesn't need to be in the dune of a cape. If he's the author you are looking for, write to him and escape.
Related Items1adam colealeister blackandrade cien almasAuthors of Painec3ember moonJohnny Garganokillian dainkyle o'reillylars sullivannxtnxt takeoverPete Dunnepodcastroderick strongshayna baszlerTommaso CiampaUndisputed Eravelveteen dream
← Previous Story Talking Smack – WWE Smackdown Live – 3rd April 2018
Next Story → Wrestlemania 34 Post Show Podcast